Youths from Niger Delta States under the aegis of The Niger Delta Students Union Government (NIDSUG) storm the street today arming themselves with placards and putting their support behind the Minister of Niger Delta Affairs, Godswill Akpabio and the Acting Managing Director of Niger Delta Development Commission , Prof.Kemebradikumo Daniel Pondei amidst the ongoing corruption allegation against the leadership of the regional agency. 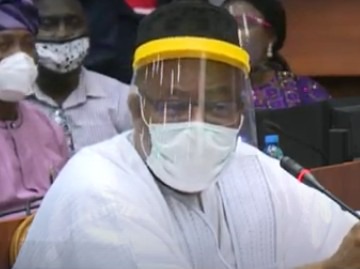 Godswill Akpabio, who the former MD of the commission, Ms.Joy Nunieh accused of Overseeing monumental corruption running into billions in the ministry. The former Akwa-Ibom Governor denied the allegation of corruption leveled against him and he also accused members of the national assembly from the South-South for getting 60% of the commission annual projects. Akpabio who was a former senator appeared at the House of Representatives Committee on Niger Delta Affairs.

Meanwhile, The Acting MD of the Niger Delta Development Commission, NDDC, Kemebradikumo Pondei who walked out on the National Assembly Committee last week and also accused the committee chairman of corruption returned to the assembly today with his team.

While the committee members were grilling the acting MD and his team, he suddenly fell down and passed out, he was rushed out of the chamber to receive treatment while the investigation was postponed.