By INNONEWS (self media writer) | 9 months ago 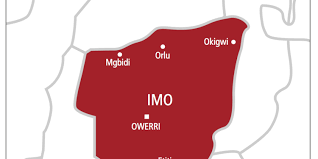 As the next political dispensation draws close, a socio political organization, Ala Owerri United Front, AOUF, has advised political leaders of the zone to get ready to hustle for power in 2023

Bernard Uba, spokesman of the group told INNONEWS in Owerri, that it is not enough for leaders of the zone to sit and lament, and expect to grab the governorship seat of the State on a platter of gold.

Uba’s comments is coming on the heels of claims made by Senator Samuel Anyanwu, who represented Imo East in the Senate from 2015-2019, that Owerri zone needs to return to the seat of power of Imo State.

Uba said “Owerri zone must hustle for power in 2023.We must seek collaboration from other zones to make it work. We cannot go solo about it or embark on emotional sentiments.

He however admitted that Owerri zone deserves to produce the next governor of the State, on the grounds that no governor from the zone has been in office beyond 30 months.

“Evan Enwerem from Owerri zone, of blessed memory was in office from January 1992- November 1993. He was ousted by the coup of Late General Sani Abacha, who sacked the Interim National Government, ING led by Ernest Shonekan

“From the way they both left office, their exit was circumstantial.

“And it was nobody’s making. They were not removed by the power of the ballot. Enwerem left via a coup, while Ihedioha was a victim of Supreme Court judgement which faulted his election as governor of Imo State”

“Based on the foregoing, Owerri zone leaders must unite and engage other stakeholders from other zones, to enable us to produce a governor.

“It is about engagement and not by wailing. You hustle for power because it is taken and not given. It is a scramble, a game for the fittest and irrespective of an endorsed zoning system, which to me has become a lip service, leaders of Owerri zone must step forward strongly.

He said “the quest to attain power is tasking, stating that Owerri zone is morally justified to seek for the number one seat of the State when the scramble for governorship seat begins” he said.

According to him, the AUOF will soon embark on sensitization and engage in “cross pollination of ideas with like minds in the zone and beyond to key into the quest for Owerri zone to regain power”