By Dekozy (self media writer) | 1 year ago

The election witnessed the presence of the State Eleco Committe Members ably led by Comr IKC Onuora, the Chairman and the Bar Ebuka Nkeke, Secretary Eleco , Ambassador Obidinma Morgan, Congress Planning Committe ( CPC) Chairman with the rest of others. 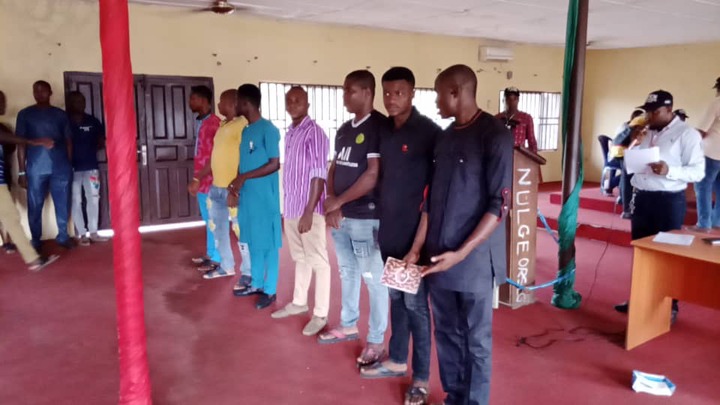 Bar Ebuka Nkeke, Eleco Secretary while Congratulating the newly elected Executive Members,charge them to uphold the reasons for the establishment of NYCN and to always make positive use of their good offices to impact on the Youths.

The Council Chairman Orumba South Local Government Area Anambra State, Hon Cyprain Okereke ( Ogbuehi Turuagwa) , in a special way thanked the Eleco Members for their efforts in making sure that the Election was done peaceful, in an objective and fair manners .

"Am very much happy that everything went Successfully without violence, I must commend the Eleco officers , the Security Personnels and the Youths of Orumba South for their Corporations geared towards this Election.

To the newly elected Executive Members of National Youth Council of Nigeria ( NYCN) Orumba South Chapter, I urge you all to make a very good and judicious use of your offices to bring a very positive change among the Youths affairs of Orumba South.

My prayers to you all is that the good Lord will be with you all throughout your service period and you shall work according to the directions of the holy Spirit in other to deliver", he Concluded.

Speaking with the press shortly after the election,Comr Uchenna Ejeri, the newly elected Secretary General, appreciated God for granting them a successful Election and thanked the Eleco officers from Awka for being neutral on the process.

He thanked the Council Chairman Orumba South Local Government for his support towards the election, by providing enough security on ground and other logistics made available by him to ensure that the process was successful, assured him of their maximum corporation and a good working relationship.

He further thanked the Executive Governor of Anambra State His Excellency Chief Dr Willie Obiano for being their for Youths , describing him as a Youth friendly Governor of the day.

He assured that the Executives will uphold the Constitution of the Council and always Support the Good Governance of the Government in power, assuring to use his good Office as the secretary to bring all the Youth of Orumba South Together in other to have a common front and work in accordance with the Government.

Casmier Orie , the Cordinator Elect , expressing his joy, thanked everyone who made out time to grace the election coupled with their individual Contribution to make the Election a successful one.

He further thanked the Council Chairman Orumba South for his dogmatic efforts to make sure that the election was successful and Promised to work with the dectate of the Constitution and use his good Office to bring Orumba South Youth Together.

According to him, we shall continue to support the Government in power and build a healthy Youth friendly environment.

Among the delegates who witnessed the process , Hon Jonathan Nka, thanked the Eleco officers for making sure that the process was peaceful and calmed, describing the Election as a brotherly one.

He further thanked the Council Chairman Orumba South for his relentless efforts in making sure that there was peaceful atmosphere during the process by providing enough security and other logistics on the ground.

In a vote of thanks, the Cpc Chairman, Ambassador Obidinma Morgan thanked the Council Chairman Orumba South Local Government Hon Cyprain Okereke for his Support and his warmly reception throughout the process and Assured him that the Council though been a non partisan but will always work and Support the good Governance of any  Government in power.

Content created and supplied by: Dekozy (via Opera News )