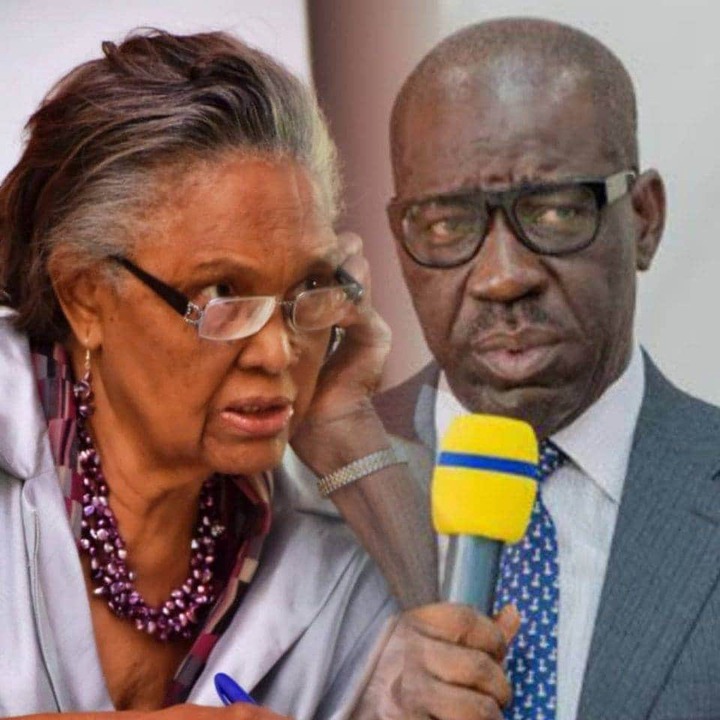 More Knocks continue to trail the false narrative peddled by the media aides to Obaseki about a purported attack on the former Vice-Chancellor of the University of Benin, Professor Grace Alele Williams by the APC Governorship candidate in Edo State, Pastor Osagie Ize-Iyamu.

The statement which was orchestrated from the office of the Special Adviser, Media and Communication Strategy to the Edo State Governor, Mr Crusoe Osagie had no single semblance of truth and was meant to divert attention from the forgery certificate and tax clearance scandal of the Edo State Deputy Governor Philip Shaibu which is presently a big threat to the candidacy of Godwin Obaseki and Philip Shaibu.

First to kick about the irresponsible statement credited to the professor of mathematics was the APC.

The party frowned at the dishonourable and reprehensible act by Obaseki and his PDP cohorts in dragging the name of the highly respected professor into their dirty propaganda of lies.

Not to be left out the University Alumni has also condemned the malicious story advising the public to be wary of such dirty propaganda from government quarters.

Chief (Dr.) Richard Oma Ahonaruogho(LLD), a past president of the University of Benin Alumni Association described the narrative as a complete falsehood that should be disregarded in its entirety.

Now the ethnic nationalities in Delta State are calling on Obaseki and the PDP to be careful the names they drop when spreading their usual falsehood.

The group says on no account should their respected daughter be subject to any ridicule in whatever guise.

The spokesman of the group, Mr Frank Awani said he had the mandate of the Itsekiri's the Ijaws and Urhobos in Delta State to condemn the brazen lie concocted by Obaseki and his media aides.

"Let this sound as a note of warning to Obaseki and his media aides on who they wish to drag to their needless propaganda of denigration.

Professor Grace Alele Williams is not only a respectable high chief but one of the few individuals other nationalities in Delta State respect and accepts as their own daughter irrespective of the ethnic nationality they belong.

We wish to distance our distinguished professor from such unguarded narratives and urge the political parties in Edo State to keep to their boundaries in their political game.

Part of the statement read.

Of recent Obaseki's media aides have been credited with series of unsubstantiated claims in a bid to brace up the dwindling popularity of Godwin Obaseki.

Recall weeks ago Obaseki's aides celebrated the endorsement of Aliko Dangote which later turned out to be a false narrative as the richest man in Africa denied issuing any such statement endorsing the candidature of Obaseki for the September 19th Governorship election in the State.

“If my partner asks for my nude pictures, that will be the end of the relationship.”- Ruth Eze