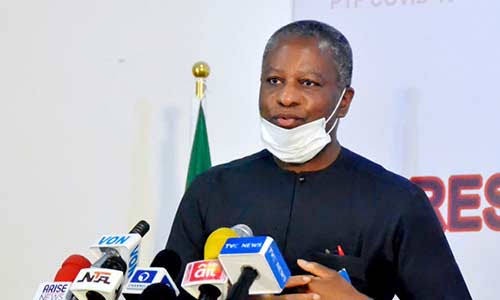 The minister made this known himself on Sunday on his verified twitter handle, where he stated that it was the fourth time he was taking the test, after he came down with a slight cough.

The minister added that he was proceeding for isolation in a health facility.

Did my fourth Covid-19 test yesterday at the first sign of a throat irritation and unfortunately this time it came back positive. That is life! Win some lose some. Heading for isolation in a health facility and praying for the best.”

2. Oshiomhole breaks silence: Defeat of Obaseki will be authenticated Sept. 19 Former National Chairman of the All Progressives Congress, APC, Adams Oshiomhole has broken his silence and vowed that the defeat of Edo State Governor, Godwin Obaseki at the poll will be authenticated on September 19.

Oshiomhole, since he was removed as national chairman has been very quiet.

But he took to his twitter on Sunday to declare war on Obaseki and the Peoples Democratic Party, PDP.

Oshiomhole stated that he had only one mission, which is to dethrone Obaseki and bring Edo back to the parts of Sustainable Development.

“I have only one mission and I know it is our common mission to bring Edo back to the parts of Sustainable Development,” he tweeted.

He said one with God is majority and that “keeping calm is not always an act of cowardice.”

Oshiomhole added that Obaseki had been busy all this while selling propaganda while the APC governorship candidate, Pastor Osagie Ize-Iyamu was selling his agenda, adding that the future of Edo must be salvaged now.

“While Pastor Ize Iyamu is busy selling his Simple Agenda, letting people know his plans for Edo State, Obaseki is busy selling propaganda because he has no Agenda to sell, he never had any at any time. The Future Is Now.,” he said.

Oshiomhole lamented that Obaseki destroying his opponent’s campaign posters was already a sign of accepting defeat before the election.

In his words: “Destroying your opponent’s campaign posters is a sign of accepting defeat already even before the election. The defeat of the PDP candidate, Obaseki in Edo State will be authenticated come September 19th.” The Socio-Economic Rights and Accountability Project (SERAP) has sent an open letter to President Muhammadu Buhari urging him to use his leadership position to urgently set up a presidential investigative panel to probe grave corruption allegations in the Niger Delta Development Commission (NDDC).

It said this includes allegations that the agency illegally spent N81.5 billion, on travels, ‘condolences’, consultancy and ‘public communication between January and July 2020.

The organization also asked him to immediately suspend Mr Godswill Akpabio, the Minister of Niger Delta Affairs and all those implicated in the allegations pending the outcome of any such investigation.

It added that witnesses and whistle-blowers must be protected and that the findings of the investigation should be made public, saying that where there is relevant admissible evidence, suspected perpetrators should be handed over to appropriate anti-corruption agencies for prosecution.

In the letter dated 18 July, 2020 and signed by SERAP’s Deputy Director, Kolawole Oluwadare, the organization said: “These are extremely serious allegations. Nigerians expect that those who run the NDDC should be free of corruption, and should enjoy no impunity. Nigerians who want to see development and prosperity in the Niger Delta will want you to take the lead to get to the bottom of these allegations and take appropriate and decisive action to address them.”

4. I contributed to Akeredolu’s success in 2016 —Ondo Deputy Governor The Ondo State Deputy Governor, Agboola Ajayi, said on Sunday he played a pivotal role in the success of Governor Rotimi Akeredolu and the All Progressives Congress (APC) in the 2016 governorship election in the state.

Ajayi defected to the Peoples Democratic Party (PDP) last month after his relationship with the governor deteriorated.

He was reacting to a statement credited to Akeredolu on his emergence as deputy governor.

The governor had said at a forum in Ese-Odo local government area of the state Saturday that he made a wrong choice as his deputy in 2016.

He said despite the criticism and attack from various quarters alleging that Ajayi was his cousin, he felt he made a wrong choice.

However in a statement titled: “Re: I wrongly chose Agoola Ajayi as deputy,” and issued by his media aide, Tope Okeowo, the deputy governor said such a statement from the governor could only come from a frustrated politician.

He said: “We understand the frustration of Governor Akeredolu over his inability to remove his deputy illegally through the instrumentality of the House of Assembly having heavily induced them with state fund to do so.

“Many injuries Governor Akeredolu caused himself cannot be blamed on his deputy, Agboola Ajayi, who he has sidelined for the past three and half years.

“It was the experience, weight and political capital Ajayi brought into the 2016 gubernatorial election that produced the current APC led government in the state.