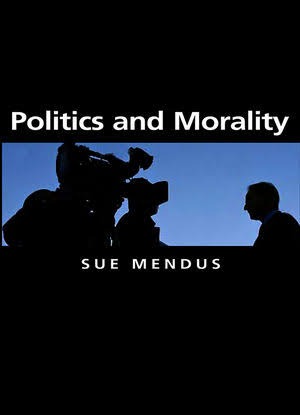 Pure principles of right have objective reality ... and people within a state as well as states in their relations with one another must act in accordance with those principles, regardless of what objections empirical politics may bring against them. True politics can there- fore not take a step without having already paid homage to morals ... as soon as the two conflict with each other, morals cuts the knot that politics cannot untie.

There is such a gap between how one lives and how one ought to live that anyone who abandons what is done for what ought to be done learns his ruin rather than his preservation: for a man who wishes to profess goodness at all times will come to ruin among so many who are not good. Hence it is necessary for a a political leader who wishes to maintain his position to learn how not to be good, and to use this knowledge or not to use it according to necessity.

Regarding the the responsibility of the public. A politician claims not to be acting as a private person, but rather on behalf of the public. While this claim may or may not be true in a non- democratic polity, it is true in a democracy. Accordingly, the responsi- bility for ‘dirty-handed’ actions in a democratic polity is widely shared. So long as such actions are a predictable feature of political life, when we elect officials, we entrust them with the burden of performing such justified, but nevertheless wrong, actions on our behalf. It might be argued that asking others to bear this burden is itself a ‘dirty’ act. Be that as it may, when politicians commit ‘dirty’ actions in circum- stances that imply consent of their constituency, responsibility for those actions becomes widely shared. When our politicians perform morally wrong yet justified actions, all of us end up with ‘dirty hands’.

What is the relation between moral judgements and judgements about what is personally most fulfilling? They can be thought to present 1) two different sets of reasons for action which, when in conflict, allow for finding out what should be done all things considered, or 2) two incommensurable sets of such reasons which, when in conflict, at least in some cases leave no possibility of establishing what should be done all things considered. Position 1) includes two views: on one, the conflict is always to be resolved in favour of morality, while on the other such conflict may in some cases be resolved in favour of what is personally fulfilling. Only the latter view is to the point. On this view, a moral rule that does not allow for exceptions can pull us in one direction, while a consideration of personal well-being pulls us in another, and such conflict can some- times be decided in favour of breaking the rule for the sake of personal well-being. In such a case, breaking the moral rule is what, all things considered, one should do.

Yet breaking it is not thereby rendered morally acceptable; it remains morally wrong. The problem with this account is that ‘if, given the actions that are recommended by moral reasons, we are sometimes justified by personal reasons in not perform- ing them and sometimes not, then we will always have the distinction between “morality” and “morality-when-it’s-justified”; and the latter, not the former, is what [is] important’. Morality as such no longer seems to count for very much. Position 2), on the other hand, sees moral and personal reasons as incommensurable and refuses, at least in some cases of conflict, to tell us what it is that we ought to do, all things considered. If we do what morality demands, we will sustain a personal loss; if we do what is personally fulfilling, we will pay a moral price; and neither of these losses is justified by the reasons enjoining the choice that brings it about. There is, then, no action that is justified, all things considered, but only an action that is morally justified and another that is justified from the personal point of view. The problem with this is that a ‘personal justification’, however satis- factory to the person offering it, is quite unlikely to impress those adversely affected by the action at issue. In truth, it is no justification at all.

Content created and supplied by: Megga2100 (via Opera News )