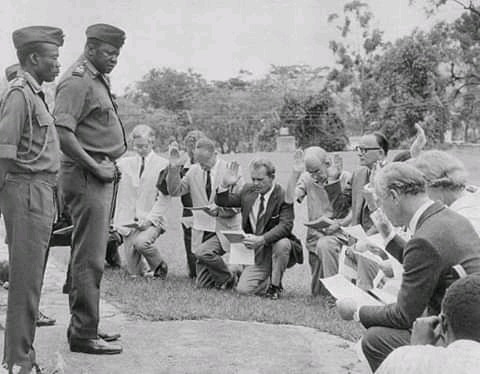 The history of cruelest tyranny and extended version of authoritarianism in Uganda won't be complete without mentioning Idi Amin Dada who served as the leader of the country from 1971 to 1979.

He came to power through military coup d'etat when he overthrew the democratically elected government of Milton Obote and coercively declared himself the President of Uganda.

His extremely ruthless regime which lasted for eight years resulted to deaths of his country men and Women.

His pompous display of majesty warranted him to break diplomatic ties with Britain and other western countries.

In fact, these photos were also his arrogant display of majestic despotism over the white men.

In 1972, he forcefully expelled Asian population in Uganda, which culminated into a landslide decline in Uganda's economy.

The population was about 50,000 and 70,000. The resultant effect was that manufacturing, agriculture and commerce in Uganda collapsed. 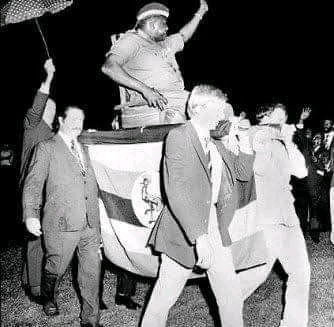 He called and bequeathed himself some funny titles that he went with in his grave: "His Excellency, President for Life , Field Marshal Al Hadji Doctor Idi Amin Dada, VC, DSO, MC, Lord of All the Beasts of the Earth and Fishes of the Seas and Conqueror of the British Empire in Africa in General and Uganda in Particular."

The photos are least of his Draculan and cruelest despotism during reign as the leader of Uganda.