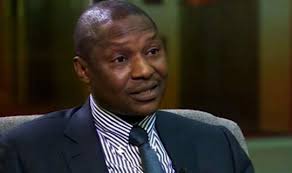 The Federal High Court in Lagos on Friday ordered the Attorney General of the Federation, Abubakar Malami; the Governor of the Central Bank of Nigeria, Godwin Emefiele, and five others to appear before it on July 24 to explain why the National Theatre, Iganmu, Lagos was handed over on July 12 to some developers while the structure is a subject of a pending lawsuit marked FHC/L/CS/2392/2019.

The court, in a ruling by Justice Ayokunle Faji, said Malami, Emiefele and others should appear to convince him why the handover should not be reversed.

The court made the order in favour of Topwideapeas Limited, whose lawyer, Chijioke Okoli (SAN), argued an ex pate application.

The SAN complained that despite that the matter was pending the National Theatre, Iganmu, Lagos was handed over to the CBN, Access Bank of Nigeria Plc and Herbert Wigwe.

Okoli contended that if not reversed, the handover of the structure would render the eventual decision of the court in the suit nugatory.

He prayed for an order “suspending/staying the purported handover on or about July 12, 2020 by the 1st and 3rd defendant/respondents to the 5th-7th defendant/respondents of the National Theatre Complex, Iganmu, Lagos and the adjoining lands thereto, pending the hearing and determination of the applicant’s motion for interlocutory injunction (by notice filed on December 31, 2019).” 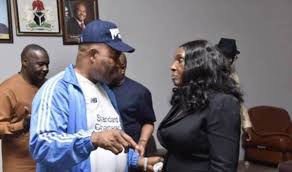 Senator Godswill Akpabio will this weekend be reflecting on the uncommon bump that has recently rocked his political stability.

Not since 2002 when he began his uninterrupted fairytale political adventure has Akpabio been smacked in the way he was by the Port Harcourt Girl!

As Governor Nyesom Wike confessed on Thursday after ‘rescuing’ Ms. Joi Nunieh from the policemen that laid siege to her Port-Harcourt residence, the erstwhile managing director of the Niger Delta Development Commission, NDDC is not the normal Port-Harcourt girl.

She is also or had until recently been President Muhammadu Buhari’s ‘girl.’ Those in the know talk of a family relationship that has lasted years.

The relationship even survived a brief stray by Joi in working for another Port-Harcourt girl, Mrs. Diezani Allison Madueke when the later was minister of Petroleum Resources.

When Mrs. Aisha Buhari was away for months after the 2019 election, Joi was one of the few who knew her itinerary and was by her side when she returned last October.

She was the lady on the right when the First Lady gave those hot salvos against Oga Mamman Daura at the airport.

So, when for whatever reason Ms. Nunieh was named into the board to represent Rivers State on the Niger Delta Development Commission, NDDC and she refused to go for the Senate screening, people knew that there was something bigger coming her way.

Eventually, she was named as managing director of a yet legally inchoate Interim Management Committee of the NDDC.

Despite campaigns against the IMC from high quarters, Ms. Nunieh being a member of the family knew the direction and went the way.

Akpabio was with her to that point. By partnering with her or using her, the former Akwa Ibom State governor some claim was hoping to raise his political ascendancy in the South-South above his contemporaries.

Whatever, the two of them were together in suppressing the proposed board that was partly packaged by Senator Ovie Omo-Agege, Comrade Adams Oshiomhole among others.

It would be a shock if Akpabio did not know of the relationship between Joi and the Buhari family. If true, then he may be excused on account of the fact that he only joined the All Progressives Congress, APC in 2018.

But if he did and made the demands either financial or sexual as claimed by Joi, then he would have then knowingly courted trouble. 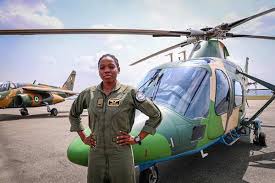 The Nigerian Air Force on Friday stated that it was investigating the circumstances surrounding the death of its Flying Officer, Tolulope Arotile, in a road accident, adding that two persons were being held.

The NAF Director of Public Relations and Information, Air Commodore Ibikunle Daramola, stated these in an interview with our correspondent, saying at the end of the investigation, “whatever information needs to go out will go out.”

The NAF spokesman later in a release on Friday noted that Arotile would be buried Thursday, July 23, at the National Military Cemetery, Abuja, with full military honours.

The NAF noted that it would continue to support female pilots’ training as 11 were currently undergoing training within and outside Nigeria.

The country was thrown into mourning on Tuesday when the NAF first announced that Arotile, Nigeria’s first female combat helicopter pilot, died at the NAF base in Kaduna State from a road traffic accident.

The air force said the female officer sustained head injuries from the accident when she was “inadvertently hit by the reversing vehicle of an excited former Air Force secondary school classmate while trying to greet her.” 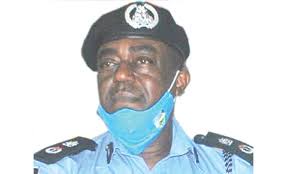 The Oyo State Police Command has lost three constables who drowned in a bridge washed away by flood on Balogun Street in Oyo town.

The policemen, attached from Oyo Atiba Police Division, trailed some hoodlums to the area when the thugs started running towards the bridge.

According to an eyewitness, one of the hoodlums reportedly jumped into the water and the policemen jumped after him during which the officers drowned.

The witness, who gave his name as Okunola Abbas said, “On Sunday, July 12, some policemen from Oyo Atiba division were passing through Balogun Street in Oyo town and saw some hoodlums smoking weed in the area.

“The area is notorious for hooliganism. The policemen parked their van and four of them started running after the hoodlums. So, being their base and knowing the area well, the hoodlums jumped into the flooded bridge. The policemen chased one of the hoodlums to the bridge and three of them jumped after him.

“They were not lucky as they were swallowed up by the mud. It was later that a bulldozer was used to bring their corpses out.”

The state Police Public Relations Officer, Olugbenga Fadeyi, confirmed the incident, adding that four suspects had been arrested by the police over the incident.

He said, “The policemen carried out a raid. They went to a criminal hideout in the area. Some of the hoodlums ran and one of them jumped and entered a canal. The policemen followed them.

“Unfortunately, the policemen drowned. It was a painful loss for us. The suspected criminal and three others have been arrested and we are still investigating them. It was based on a tipoff that our men went to the criminal hideout. The hoodlums had been disturbing the area. The report before me is that they are suspected criminals and investigations will reveal more details later.”