Who Are Those Behind The Unsucessful Arrest of Dr. Joy Nunieh - Ex NDDC Boss ?

By Riltek (self media writer) | 2 years ago 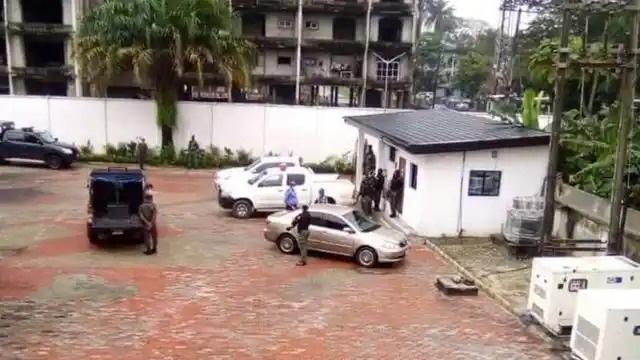 Armed police officers stormed Dr Joy Nunieh's house in the early hours of thursday which according to the Governor of Rivers State - Nyesom Wike was around 4 am in the morning . He described this activity as unusual emphasizing that Dr. Joy Nunieh was a defenseless woman.

In a video clip showed by African Independent Television (AIT) yesterday Dr Joy Nunieh was seen covering the activities of the police in her compound yesterday on her phone, lucky enough she was behind the doors and that I think gave her the opportunity to call the governor of Rivers state to inform him of the presence of the armed policemen.

The Nigerian police for the umpteenth time displayed their unprofessionalism by not coming along with a warrant of arrest, which coersive apparatus of a state should do that. The governor of Rivers state was rational enough to say the policemen could be ascribed as kidnappers because they did not come along with warrant of arrest neither was the state commissioner of police aware of their invasion. Governor Nyesom Wike was there at her residence and was successful in taking ex NDDC boss to the Rivers State government house. If they were kidnappers only God knows what we would be saying by now. Dr Joy Nunieh herself in an interview by the members of press said openly that nothing can stop her from exposing the level of corruption in the NDDC. I think she knows that the planned arrest was an attempt to silence her on the subject matter which was before the national assembly. Dr Joy Nunieh was suppose to be in Abuja on Thursday to appear before the National Assembly for the ongoing probe in the NDDC.

Irrespective of those who may be responsible for this, Governor Nyesom Wike has warned that those involved should be careful as nothing must happen to Dr. Joy Nunieh.

Content created and supplied by: Riltek (via Opera News )