The twist of VE day celebration. 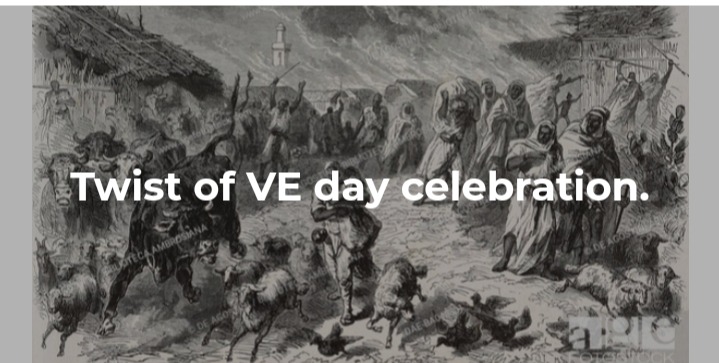 While the people of France were celebrating freedom from the Nazis, people in a north African country of Algeria were denied same.

The French colonization of Algeria started in the year 1830 when Algiers was captured from the ottomans, following the capture they pushed further with the hope of capturing the entire country (Algeria). A problem in the the form of native Algerians arosed when they United and chose Amir Abdelkader as leader of their resistance against the French in the year 1832. They successfully held the French advances which prompted a treaty to be signed in the year 1837 which was subsequently broken by the French by invading territories under the control of Amir Abdelkader.

Abdelkader lunched attacks against those that invaded his territory. A general by the name Bugeaud who was a signatory to the treaty of Tafna in 1837 returned to Algeria to begin a new campaign of crushing native lives.

One of the famous quote of general Bugeaud " we fire little gunshots, we burn all douars, all villages, all huts, the enemy flees across taking his flock"

The French brutally suppressed the natives forcing them to starve with the aim of getting them to abandon Abdelkader. With this brutal tactics, the French eventually defeated Abdelkader in the year 1847. The French promised Abdelkader exile in either Egypt or Palestine but instead sent him to prison in France. After his release, he settled in Damascus in the year 1860 and was instrumental in saving over 1000 Christians including french men who had exiled him.

The French completed the conquest in the year 1902.

Violence broke out as the French wanted to destroy the flag. The French eventually suppressed them with every means necessary. In Suppressing them, violent attacks were carried out on the civilian population in setif and Guelma. It is believed that as many as 45,000 native Algerians mainly innocent civilians were killed as compared to 102 french settlers. In this massacre, 13% of the men in Guelma were murdered. This massacre, known as the Setif and Guelma massacre, inspired the Algerian War of Independence that lasted from 1954 to 1962.

Content created and supplied by: Kacee1 (via Opera News )