By Dikegodspower1 (self meida writer) | 9 months 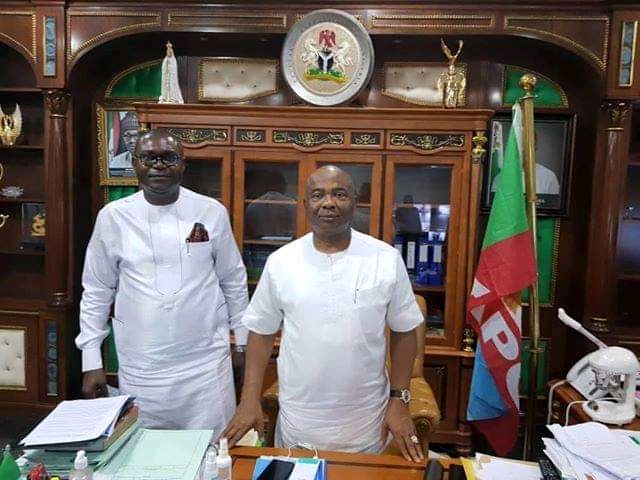 Stop Exposing And Ridiculing Yourselves; There Can Only Be One Governor At A Time.

A trip roundtown and its environs will convince even the blind and the doubting Thomases that God has answered our year-long prayer of blessing us with a compassionate and knowledgeable leader who sees things beneath the surface and with the zeal and quest to address our compounding socio-economic woes.

Seeing the rate at which our dear state is being transformed overnight, it's seriously unsettling enemies of our dear state, especially those who have had the opportunity to prove themselves in the past but failed woefully because of greed and insatiability. These distractive and destructive elements of hate and vengeful particularism will stop at nothing in ensuring that the Shared Prosperity Government is blackmailed out.

Under 5 months, Governor Hope Uzodinma has succeeded in bringing sanity and raised the bar and credibility of governance and Government. Today, there is verifiable checks and balances, Institutions of government and means of doing business in Imo state including provision of infrastructure and social amenities are great testimonies of what the current administration has been upto.

The most beautiful aspect of Hope Uzodinma's led administration, is the equal concentration of developmental projects in both the urban and rural areas at the same time. It is a fact that since the inception of this democratic experience in 1999, no Governor had ever defined his agenda to cover both the urban and rural areas like the way the current Governor has captured it. Sincerely, with this trend, I see a new Imo where the reverse of urban to rural migration Will become a possibility.

It is a well known fact, that Gov. Uzodinma was sworn-in on the 15th of January 2020 with not even a piece of paper handed over to him by Emeka Ihedioha. After 23 days, the same Ihedioha dragged the new Government to court which was popularly tagged as "review and reverse". That distraction lasted till 26th of March 2020. And 28 days later, we were visited by yet another distraction, this time, a deadly pandemic called Corona virus. This Virus has not only claimed lives of many prominent people, it has also destroyed the fabric of our economic mainstay and rendered our economy completely useless.

It is no gainsaying that, throughout Ihedioha's short period as Governor of Imo state, the least money he received as monthly allocation, was N8.2billion. He netted upto N9.8billion in some cases. But today, under Covid 19 era, the highest Gov. Hope Uzodinma has ever received as monthly allocation since the outbreak of Corona virus was N3.2billion. And remember that the government is heavily overburdened with a ridiculous civil service wage bill of about N2.7billion every month.

The FG has been borrowing to be able to keep the country afloat. The prices of Crude oil have crashed. Sometime last week, a barrel of crude oil was selling at $11 and the cost of producing the same barrel was put at $19. Obviously, it is commercially unhealthy for government to produce at $19 and sell at $11. This development has plunged so many states especially those that depend heavily on money coming from Abuja to pay bills, into financial mess.

But in the case of Imo state, the Digital Governor, Sen. Hope Uzodinma is leaving no stone unturned, as he is in the verge of repositioning Imo to a new level of economic emancipation through other sources of funding and economic growth mechanisms. The current reality on ground has not deterred the Governor or pose any threat to his resolve to entrenching good governance and economic freedom for the People of Imo state.

The Governor has brought appreciable sanity in the state's payroll system. Civil servants and pensioners are now being paid seamlessly. At least, many fraudulent Indulgers had been fished out and blocked. The search continues until the state is completely sanitised.

Constructive criticism in a democratic setting is allowed. People can criticise the Government on issues by proffering alternative ideas and solutions.

Opposition politics is not about chunking out lies, falsehood, propaganda and blackmail, it is about engaging government constructively. We are at liberty to criticise the policies of any government without going personal against anyone. And when you portray any government policy as anti-people, please try and synthesize your own idea on the subject matter. It is not enough to criticise, you must also proffer solution to the vexed issues.

It is also necessary to use the same strength with which you criticise any government policy that did not appeal to your conscience, to applaud those ones that captured your fancy. That's what constructive criticism is all about. But when you are bristled with hatred and selfishness, you are nothing but a sadist.

The truth is that Gov. Hope Uzodinma has come to stay. It is for our collective interest to support this government of Shared Prosperity to fix Imo state.

No amount of blackmail and mudslinging will stop the Digital Governor from pulling Imo state out from the depth of poverty and entshreib Imo on the map of economically viable states.

Very soon, we will do a roll call of the enemies of this state and why they are so afraid of the giant strides being recorded by Gov. Uzodinma.

After Leicester City Won The FA Cup, See How Fofana And Choudhry Celebrate in Style (Photo)

Segun Mimiko, Ayo Adebanjo and others reveal reason why they are clamoring for Restructuring

Jews that believe in Jesus Christ refuse to be called Christians, this is what they call themselves

Ladies check out these beautiful short gowns for you to try