By OmoobaAlekuwodo (self media writer) | 11 days ago

As technology advances stone age to the new nano technological age that the world is experiencing, now, there are equivalent changes on the geographical factors that make the earth. Hence, the proximity of the Federal Republic of Nigeria to review her national map. 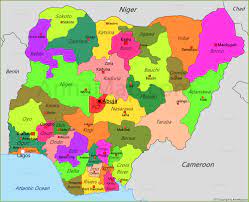 Considerably, over the past 41 years when the first map of Nigeria was produced by the Canadian government, there might have been some environmental and topographical changes that may, sincerely, warrant the Federal Government of Nigeria to embark on mission to produce a new map of Nigeria that will show the current topographic sheets of the country.

However, there are two strategic reasons that may warrant the Federal Government of Nigeria to proceed on the production of new map of the country.

The Federal Republic of Nigeria may need to embark on the production of new map of Nigeria because there is no how the government of a country can plan, effectively, for the course of growth and development of her country without having a concise map for the country.

For instance, one way wonder if the map of the Federal Republic of Nigeria should remain the same after the ejection of Bakassi Peninsula from the country. It is important to recall that the territory of Bakassi Peninsula was, completely, ceded to Cameroon on August 14, 2008.

However, was the Bakassi Peninsula captured in the current map of Nigeria or Not? and How has the ceding of Bakassi peninsula to Cameroon has been affecting planning and decision making by the Federal Government of Nigeria, since 2008?

These are parts of the questions that may need to be resolved by the production of new map of the Federal Republic of Nigeria.

Surely, with a precisely updated map of Nigeria, planning and decision making by the Federal Government of Nigeria will be more effective than it has been in the past.

With a new map of Nigeria, the Federal Government of Nigeria will surely have a reliable geographical data that may, surely, assist the government to curb the menace of insecurity that is facing the country.

The loops in the Nigerian borders that are being used by some individuals to disrupt the peace of the country may be captured in the new map. This may allow the government to develop a reliable security template that can be used to fight the insecurity challenges that is facing the country.

When Was Nigeria Map Drawn?

The current map that is being used by the Federal Republic of Nigeria was first produced by Canadian Government in 1970, about 41 years ago.

Is Government Doing Anything To Produce A New Map?

Actually, the Federal Government of Nigeria is working assiduously on the course of reviewing the map of Nigeria, which was produced in 1970 by Canadian Government.

According to a new that was published by the Guardian, the Acting Surveyor-General of the Federation (SGoF), Abdulganiyu Adebomehin, while defending the 2022 budget appropriation before the House Committee on Works and Housing at the National Assembly Complex, Abuja, was quoted to have stated that "...The Federal Government has concluded plans to review the current map of Nigeria..."