Yari Denies Defying Airport COVID-19 Protocols, Says Fani-Kayode Would Pay For His Tweet Against Him

By politicalreporteronline (self media writer) | 2 years ago Yari Denies Defying Airport COVID-19 Protocols, Says Fani-Kayode Would Pay For His Tweet Against Him

There have been reports that very important persons are now breaking COVID-19 order. One of those alleged to have bridged COVID-19 protocols is former governor of Zamfara, Abdulaziz Yari. 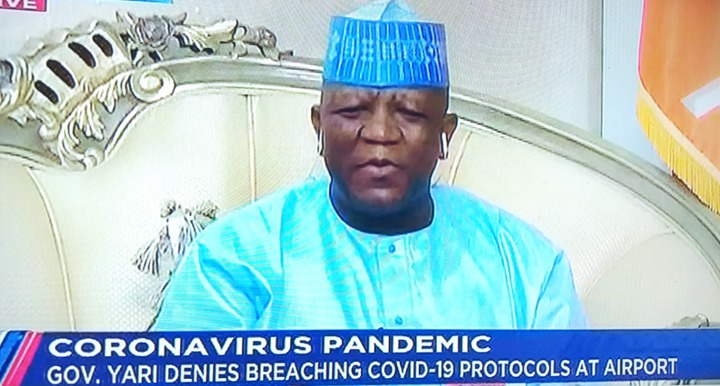 When asked through a live phone conversation on Journalist Hangout today by Ayodele Ozugbakun, he debunked the allegation saying he never broke COVID-19 directives.

According to the ex-governor, he said that he saw the news yesterday on the official page of Twitter handle of FAAN that he breached protocol, and that he was surprised.

He said he actually dropped by the road to attend the wedding of Nigeria Antorney General of Federation's son.

He said when he arrived at the airport he only met person who took his temperature.

He said the airport officials took his temperature.

“I was even joking with the official checking my temperature. Is my temperature okay? Am I free to travel? He said it is okay. I then dropped the bag my hand and walked to the airport. That is all.”

He said when he saw the news that he quickly contacted the MD, and that were reports that I molested their official. That he didn't submit himself for searching.

Abdulaziz Yari emphasized that he didn't say anything aside the temperature check testing he did.

He equally said he is really disappointed about the story being carried about him.

Yari said he had called the Aviation Minister to hack down what they tweeted about him to the press.

He said these were all fabricated stories about him and that he still found it difficult to understand why they cooked lies against. He said FAAN should be careful, and he hopes politicians wouldn't use this against him.

However, the Minister of Aviation promised Yari that he would inform FAAN to remove the purported Tweet.

He emphasized the Minister should clear his name in this controversy saying he had never got a yellow card during his football days let alone pushing airport official.

I demanded an apology, he said.

As for the series of Tweets made by Femi Fani-Kayode against his person, he said he would pay for what he was paid to Tweet against him.

He said Femi Fani- Kayode has no business in what happened if that he was paid to paint him black saying that people have been trying to deny his image for the past one year so as to bring possible corruption allegation against him.

He finally said he had informed his lawyer concerning Femi Fani-Kayode Tweets against him.

What do you see to this series of allegations and counter allegations in Nigeria these days.

Who should we blame? Is FAAN, Femi Fani-Kayode or Abdulazeez Yari?