By Tnetwork (self media writer) | 14 days ago

Tiv Youth Council Worldwide (TYCW) has asked President Muhammadu Buhari to be mindful of pressure seeking for the release of Indigenous People of Biafra (IPOB) leader, Nnamdi Kanu, adding that his release could be an invitation for more treasonable acts. 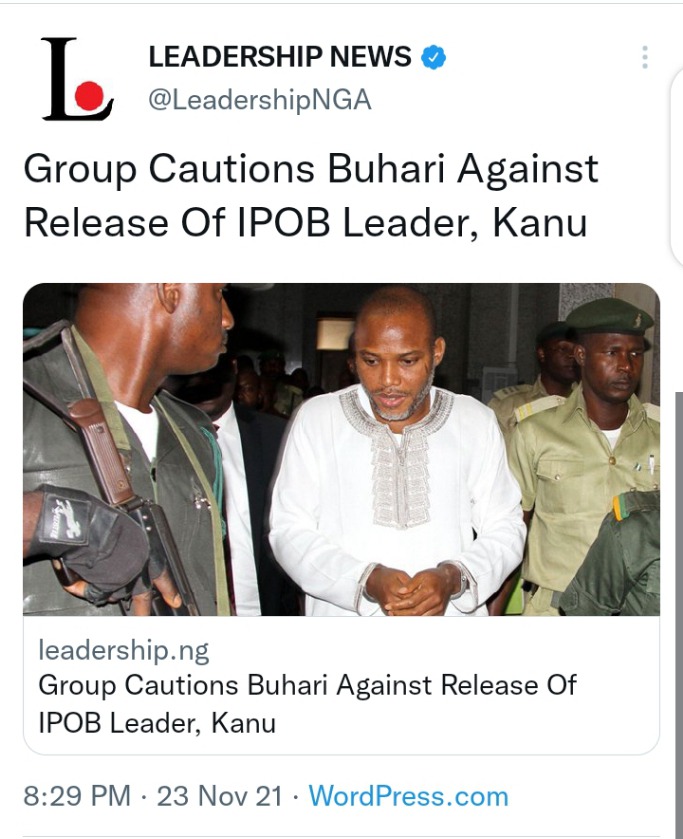 The group was reacting to request made by a group under the aegis of Highly Respected Igbo Greats, led by First Republic parliamentarian and Minister of Aviation, Chief Mbazulike Amaechi to grant unconditional release to Nnamdi Kanu who is currently standing trial.

The TYCW in a statement signed by its President, Mike Msuaan argued that it would be improper to grant amnesty to someone who has committed heinous crimes against the state and has not in any form shown remorse for his actions.

“We receive the request by the revered elder statesmen from the south east with mix feeling. While we commend the elders for standing up for one of their sons, we are worried that these statesmen had no influence over leader of the proscribed IPOB when he threatened the peace and unity of the nation.

“While we encourage any move that seek to promotes peaceful coexistence in the country, we appeal that care should be taken not to give room to persons who seek to destroy the unity of the country.

“There must be consequences for any action taken. If Kanu is released unconditionally, what become of other persons standing trial for same or similar crimes? We insist that releasing Nnamdi Kanu will be setting bad precedence”, the statement noted. 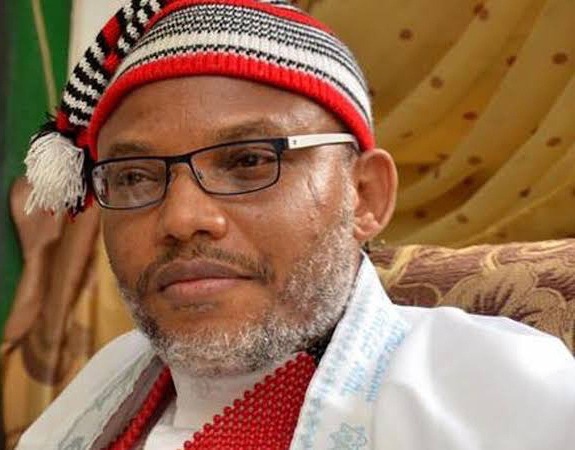 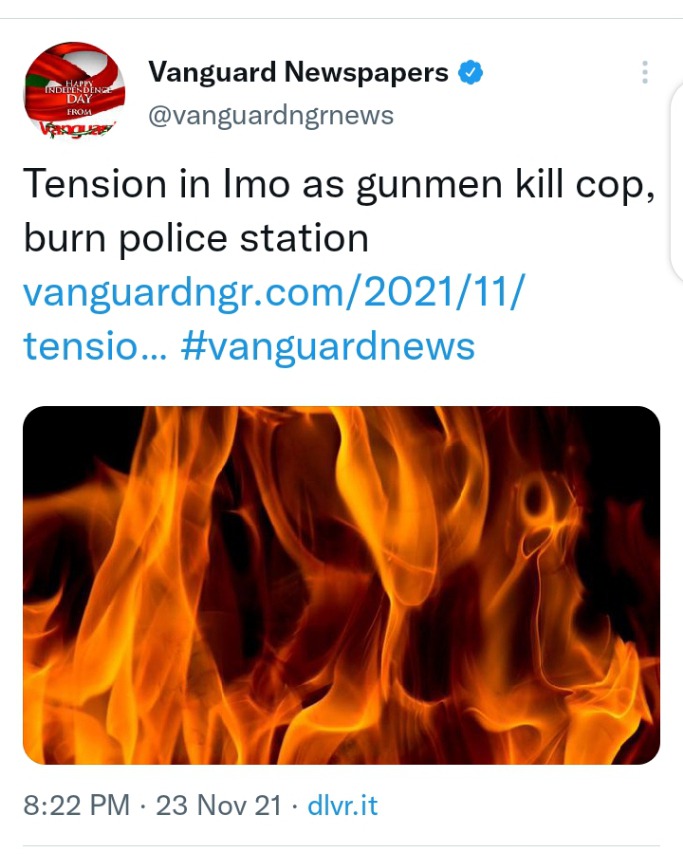 It was gathered that the attack left one of the police operatives dead.

The gunmen, it was learnt, inflicted a cut on the Divisional Police Officer’s head.

According to a source, vehicles parked at the station were also burnt.

“Gunmen attacked the Arondizuogu Divisional Police Headquarters. They killed a police officer and burnt the station.

“They also gave the DPO a cut on the head and vandalized his Jeep and a sienna vehicle belonging to the division”, the source said.

The state Police Public Relations Officer, Micheal Abattam, confirmed the attack and added that the state commissioner of police, Rabiu Hussaini, had ordered investigation into the incident.

Timipre Sylva, minister of state for petroleum resources, says President Muhammadu Buhari has promised to take action on the current high cooking gas prices as the Yuletide season draws near. 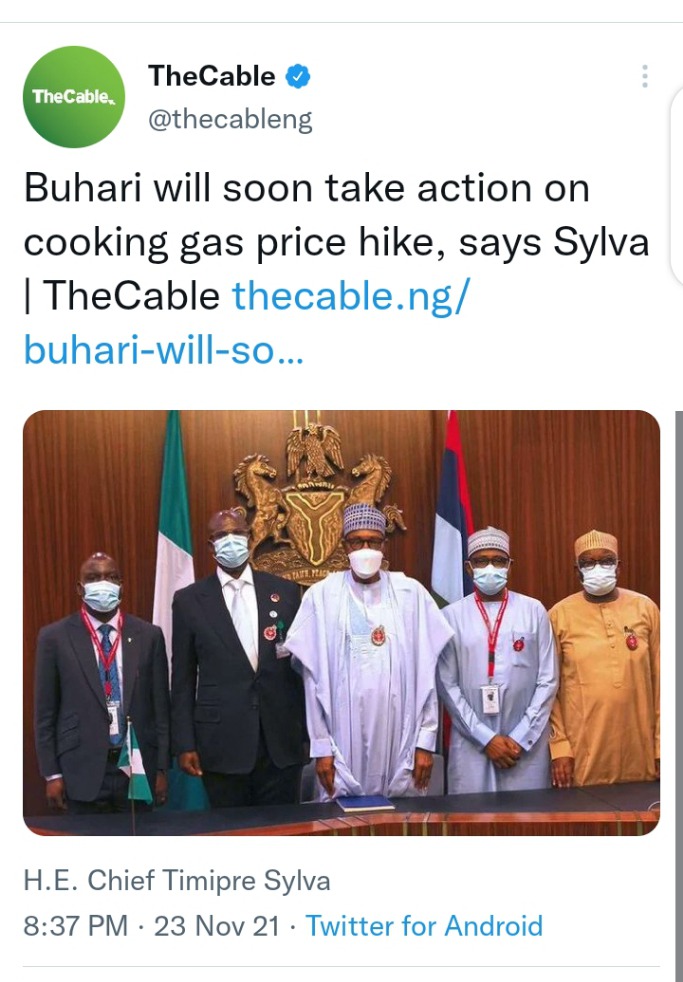 He said the president is aware and concerned about Nigeria’s cooking gas price hike.

Sylva said this on Tuesday while speaking with state house correspondents after a meeting with the president at the presidential villa, Abuja.

The minister explained that the government has no control of the prices, saying it is the international market that primarily determines the price of the commodity.

Sylva, however, assured Nigerians that some elements of the pricing would be adjusted internally to enable a reduction.

“We must understand that cooking gas is not subsidised. It is already a deregulated commodity so the price is not determined by the government or anybody here in Nigeria. In fact, gas prices are determined internationally,” Sylva said. 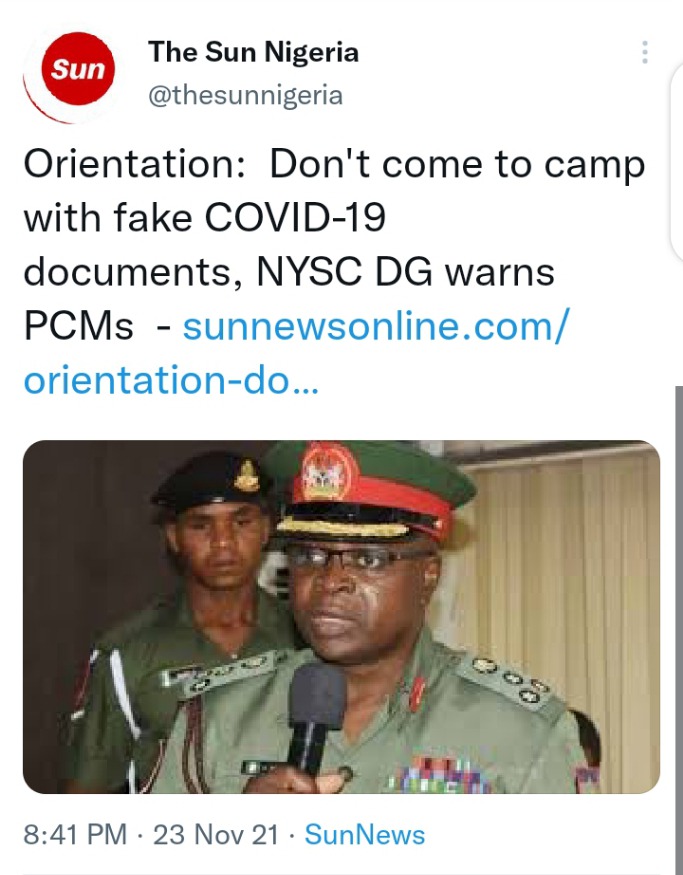 General Shuaibu gave the warning on Tuesday during a live webinar jointly hosted by the scheme and Nigeria Centre for Disease Control in preparation for the 2021 Batch ‘C’ Stream Two Orientation Course.

He also warned that anyone caught with fake COVID-19 document in camp would be handed over to the law enforcement agents for prosecution.

The Scheme’s boss further assured that adequate measures have been put in place to ensure the safety of all NYSC Orientation Camps across the country.

“Ensure that you are a good and law-abiding citizen. If you violate COVID-19 safety guidelines, we have COVID-19 vanguard in camp and you will be decamped,” he warned.