The body in a statement by its president, Kelvin Osadolor alleged that the incumbent governor of the state has mortgaged the lives of Edo people, stressing that the governor did not deserve a re-election.

Osadolor maintained that the state is underdeveloped under the leadership of Obaseki despite efforts by his predecessor, Adams Oshiomole to bring the state to limelight.

He alleged that the governor promise to create 200,000 jobs in four years was a scam, stressing that only SSA and SAs were appointed into his administration. 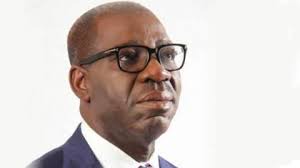 He further alleged that the promise by the governor to change the Gelegele sea port was never fulfilled.

He said, “Obaseki administration is full of deceit and lie. Obaseki is sugar coated and he has mortgaged our destiny for four years and we are saying we want to follow him for another four years, when is Edo state going to be developed?

“We Edo people are one of the most traveled states in Nigeria, but it saddens our heart that despite this, when we go back home, our state is underdeveloped.

“When Osihomole came, he changed the narration, he took us from where we are to the limelight and we believed that the man Oshiomole is bringing will take us higher than what he has done. But, it came as a surprise that Obaseki did not only fail to sustain the legacy of Oshiomole, he also fought the finger that fed him.

“Obaseki went to Gelegele seaports when he was campaigning and he promised that if he was elected he will transform the place, but it is all lies because the place has been taken over by weed and nothing has been done there.

“He also promised jobs which we did not see anything till today, he was unable to employ youth of the state and this has made unemployment in the state be on the high side.

“As an economist, all he has been doing is what will favour him without putting the people of the state into consideration.”

He however charged the people of the state to vote for Pastor Ize Iyanmu who he described as a man of integrity.

He added, “We are imploring all citizen not to vote for Obaseki so that we will not continue to live in life od deceit and lie. We need to vote for conscience and Pastor Ize Iyamu is the person that can deliver us from this man (Obaseki).”