By AkwaIbomInformationMinistry (self media writer) | 1 month ago 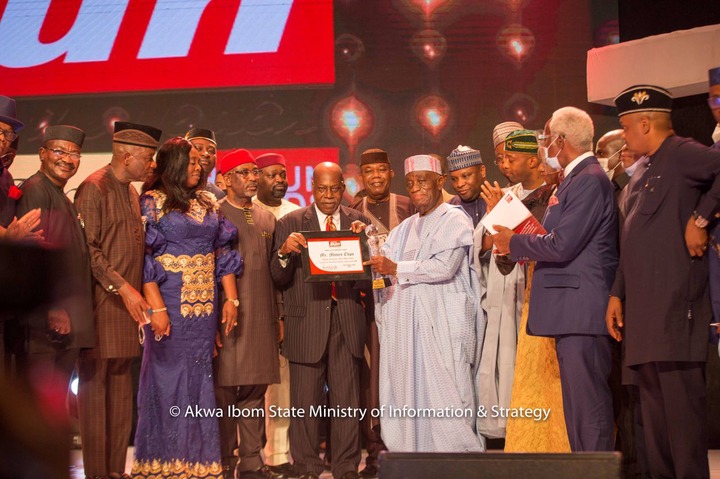 The Sun award ceremony, which attracted dignitaries from the political class, private sector, and the entertainment industry, held yesterday, Saturday 16th October, at the Eko Hotels & Suites, Victoria Island, Lagos, had the Secretary to the Government of the Federation (SGF), Mr. Boss Mustapha, as Chairman.

In his welcome address, the Managing Director/Editor-in-Chief, Mr. Onuoha Ukeh, stated that the awardees were selected in recognition of their special contributions to the different sectors of the economy and humanity at large, stressing that despite the challenges of Covid-19 last year, they managed to make a difference, thus the awards were meant to celebrate and encourage them to do more for the society. 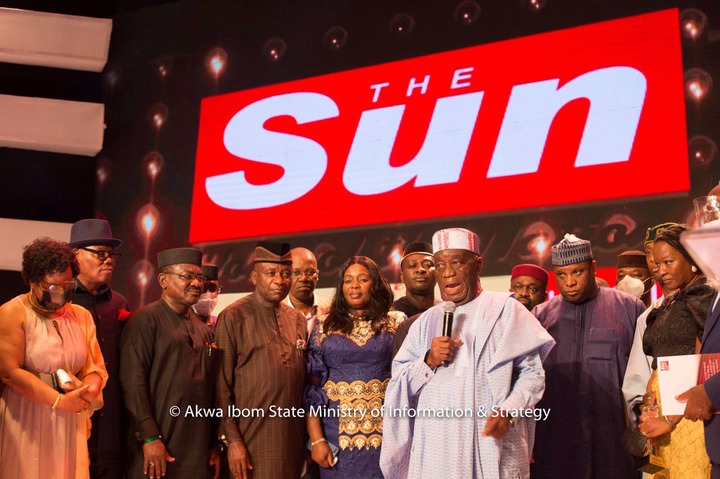 According to Onuoha, " Tonight is a night of thanksgiving and celebration. We are celebrating Nigerians, who despite the outbreak of Covid-19 pandemic, stood up to be counted last year amidst unusual times".

"We are honouring these twenty-four Nigerians, who applied winning strategies, and recorded outstanding successes. They did well in governance, public service, entrepreneurship, entertainment, hospitality, sports, Industrialisation, philanthropy, and humanity". He said.

Similarly, the current Senate Chief Whip, and Publisher of the Sun Newspaper, Senator Orji Uzor Kalu, who presented his speech through his daughter, Neya Kalu, acknowledged the contributions of the esteemed readers of the Sun Newspaper in sustaining the growth of the national daily. He urged the awardees to remain consistent in their contributions to national development and humanity.

"With unity and brotherhood, we can achieve more as a people and as a country. We must continue to work together despite our differences for the common good of our nation, because to whom much is given, much is also expected ". Kalu said.

While commending the efforts of the front-line healthcare workers in the fight against Covid-19, the Abia North Senatorial District representative, paid tributes to those whose lives have been cut short by the pandemic and prayed to God to comfort the bereaved families.

"As you know, we were unable to do this last year due to the ravaging effects of Covid-19 pandemic, and by the grace of God, we are able to gather here tonight to celebrate excellence, and it is gratifying to also know that we can share friendship and fellowship with one another on a day like this, and we are grateful for this. He added.

On his part, the SGF, and Chairman of the occasion, Boss Mustapha, who was represented by the Hon. Minister of Youths and Sports, Mr. Sunday Dare, noted that since the inception of the award, 18 years ago, the event has remained a reference point in the media community, thus sustaining its trademark of celebrating notable Nigerians who have excelled in their different spheres of endeavours.

"I want to commend the management of the Sun Newspaper for organising this award ceremony to celebrate industrious Nigerians and great achievers ".

"Over the years, this platform has played a major role in boldly directing and showcasing the Nigerian success story both within and outside the country. I therefore congratulate all the winners here tonight ". Mustapha added.

Speaking, shortly after receiving his award, Mr. Moses Ekpo, said that he was thrilled by the recognition, saying that the award was a call on him to continue to do more for society and humanity. He thanked the organisers for finding him fit for the honour. 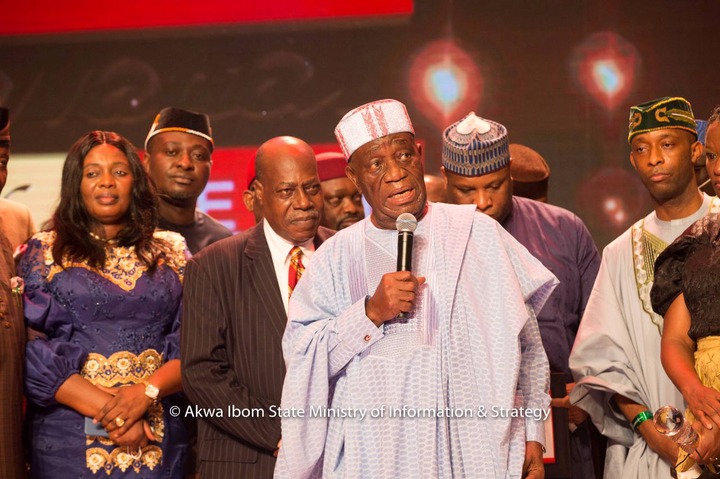 Ekpo said, " I dedicate this award to Governor Udom Emmanuel who has given me the platform to contribute to the great things that he is doing in Akwa Ibom State, and for also raising the bar of good governance in Nigeria”.

Recalling his early days experience in the journalism profession, Ekpo acknowledged the contributions and mentorship of the former Lagos State Governor, Alhaji Lateef Jakande, whom he said, gave him a chance to work as a Proof Reader in the then Daily Express Newspapers, and equally ensured that he, Ekpo, was well groomed academically and professionally.

The ceremony, which was the 18th edition, was tagged: Celebrating Excellence, featured twenty three other notable Nigerians who also emerged as winners in  different categories.