By Tobiowo (self media writer) | 1 year ago

Ahead of the December 5 bye-election in the Cross River North Senatorial district, the populace of the region have collectively endorsed Dr. (Barr.) Stephen Odey, the candidate of the People's Democratic Party (PDP).

In a move described as a "patriotic" assignment by the independent and determined youths of the district, reaffirmed their support for Dr. Stephen, who is seen as the last hope of Cross River North Senatorial district.

Without mincing words, Dr. Stephen Adi Odey is a multifaceted and multidimensional genius. He is an astute personage with modest and well-adjusted qualities backed by skills, experiences, intelligence and integrity. He is an honest, compassionate, trustworthy and reliable personage with the fear of God. 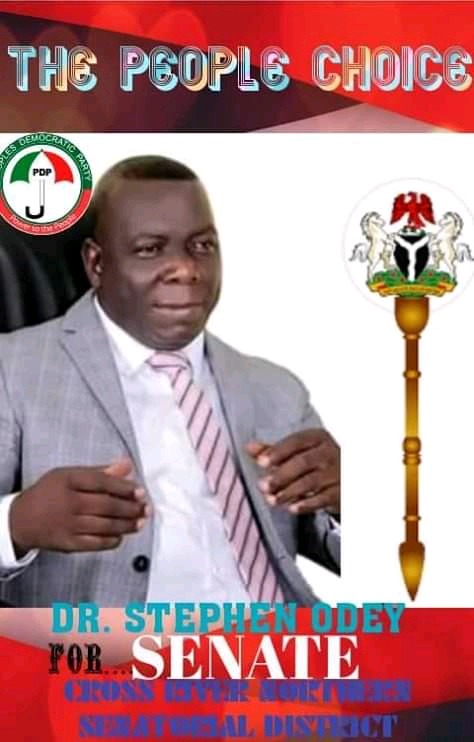 He served with the Cross River State Ministry of Education as a teacher between 1989 and 1998. He rose to the capacity of Acting Principal in 1999.

Dr. Odey resigned from the Cross River State Ministry of Education and joined the defunct Joint Maritime Labour Industrial Council in 2001 as Senior Dock Labour Officer and in 2009 he joined the services of the University of Calabar, Calabar, Nigeria as Lecturer II in the Department of Sociology, and was promoted to Lecturer I in 2015 and in 2019 he was also promoted Senior Lecturer.

Outside the University of Calabar where he has focused his time and attention till today, he has also served as Adjunct Lecturer with the National Open University of Nigeria between 2005 and 2009.

In all these offices, Dr. Barr. Stephen Odey has brought his wealth of experience in the academic, legal and administrative milieu to bear. While an academic in the university system, Dr Odey served as a committed teacher, mentor and contributed immensely to the graduation of students in the University.

Content created and supplied by: Tobiowo (via Opera News )