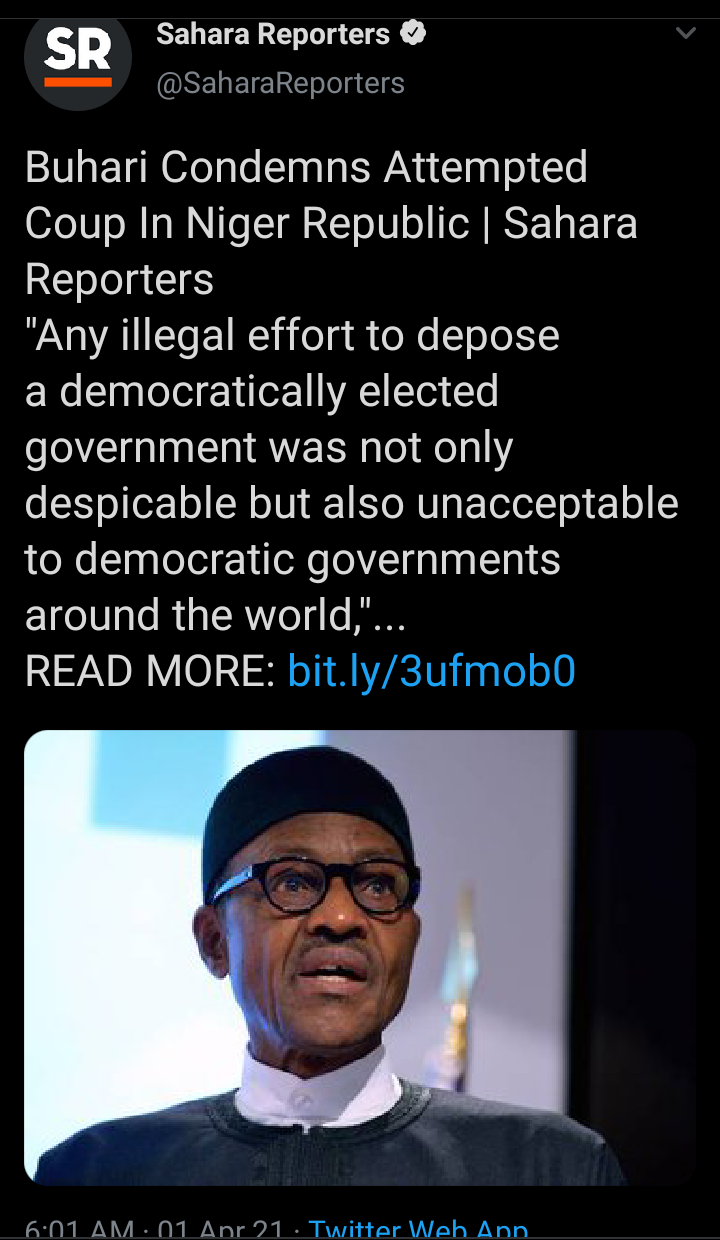 "Any illegal effort to depose a democratically elected government was not only despicable but also unacceptable to democratic governments around the world," Buhari was quoted as saying.

A statement issued by the Senior Special Assistant to the President on Media and Publicity, Mallam Garba Shehu in Abuja said President Buhari spoke in a telephone conversation with Mahamadou Issoufou, his counterpart and outgoing president on the situation in the Niger Republic.

The statement quoted Buhari to have said, "The international community is hostile to the change of government by violent and unconstitutional means. It is utterly naive to attempt the removal of an elected government by force. I'm particularly concerned about the negative impact of coups on African stability, peace and progress.

"Nigeria cannot be indifferent to these dangers to Africa. Coups are out of fashion and the involvement of the military in violent change of government is doing more harm than good to Africa." 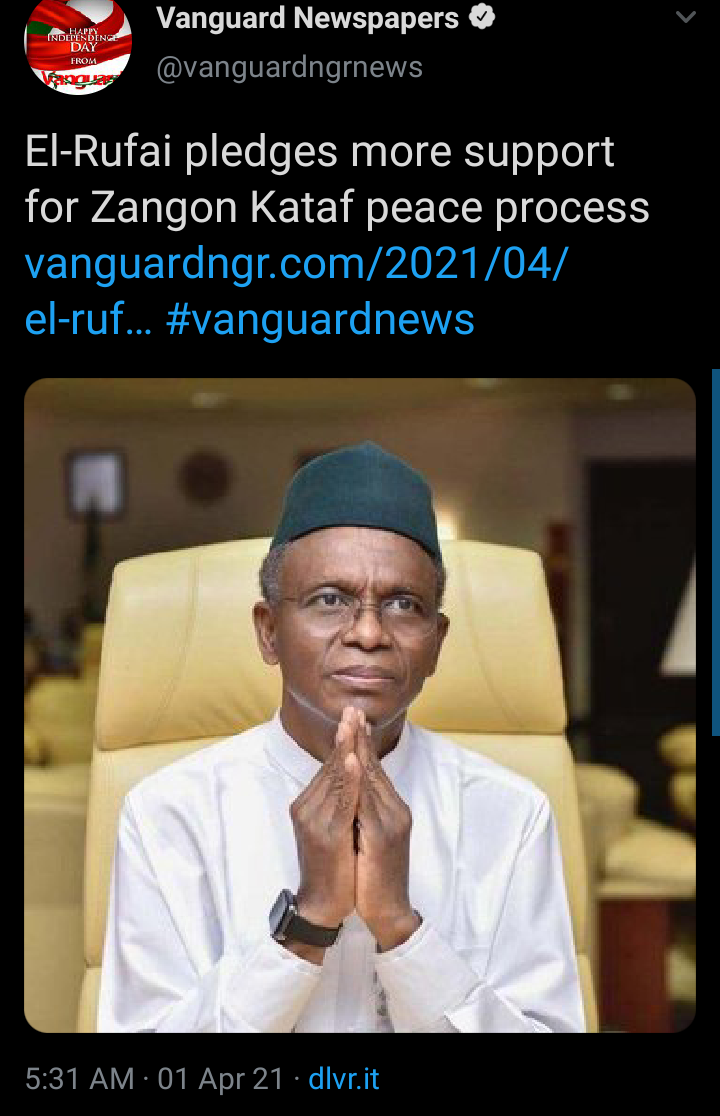 The governor made this known when he hosted the Agwatyap, Chief Dominic Gambo-Yahaya, on Wednesday in Kaduna.

A statement issued by Special Adviser to the governor on Media and Communication, Mr Muyiwa Adekeye, said that the Agwatyap visited the governor to brief him on the recent challenges confronting the peace process in Zangon-Kataf.

El-Rufai encouraged traditional and community leaders involved in promoting peace, not to be discouraged by the disruptions of the peace process by those who preferred the perpetuation of conflicts.

North vs South: Nasarawa Governor Reveals Zone That Should Get 2023 Presidency

Governor Abdullahi Sule of Nasarawa State has stated that Nigeria’s next president come 2023 should come from the southern part of the country. 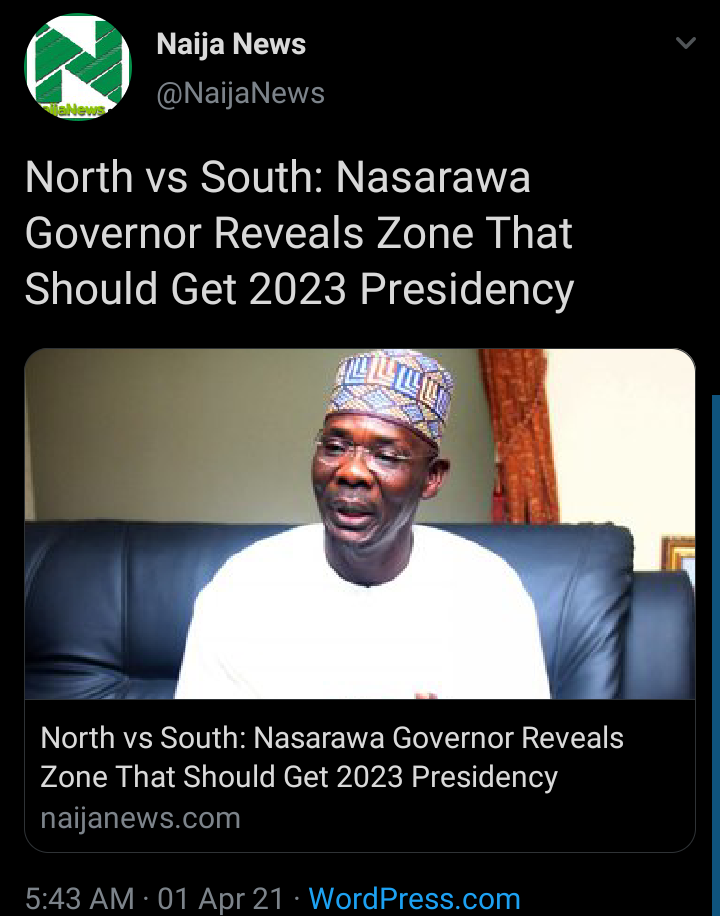 He stated this on Wednesday at the Government House in Lafia, the state capital, when he received supporters of Senator Umaru Tanko Al-Makura calling for the ex-governor to become All Progressives Congress (APC) National Chairman.

Governor Sule stated that having benefitted from power rotation, it would be unfair of him to denounce same.

“That is why, from all indications, I have never said anything against the agitation for rotation of the presidency to the South. It’s because I don’t think it’s a bad idea for peace in Nigeria, if there is rotational presidency,” Sule said.

He also stated that for fairness and peace, if the presidency is zoned to the South, the APC national chairmanship should be zoned to the North.

“The Northwest currently has a President that has at least two years to go. So, it will not be ideal to have a president and a chairman, even for one year, much less for two years, from the same zone.

The Nigerian Air Force has declared one of its aircraft lost radar contact when on a mission.

In a statement on Wednesday, Air Commodore Edward Gabkwet said the plane was “on routine mission in support of own troops at one of the Theatres of Operation in the Northern part of Nigeria”. 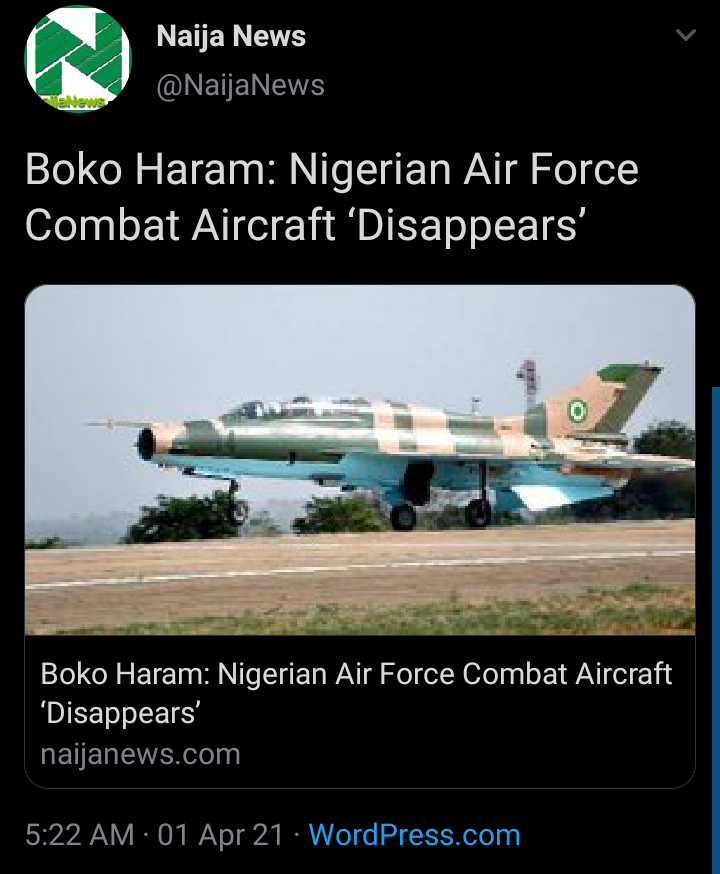 “Efforts are currently ongoing to locate its whereabouts. Details to follow”.

He however did not state how many people were on aboard.

Gabkwet also did not reveal whether the aircraft was lost in the North east or Northwest or even the North central part of Nigeria.

Recall that on 21 February, an Air Force plane on a mission to Minna Niger state crashed in Abuja.

All the six persons aboard the B350 aircraft died as it crash-landed on the final approach path of Abuja Runway 22.

In other news, President Muhammadu on Tuesday afternoon, departed the shores of Nigeria for London, the United Kingdom through the Abuja International Airport.

The President departed the country in one of the jets available in the presidential fleet, Naija News understands.

24-Year-Old Nigerian Beauty Queen, PhD Student Shot Dead In Her Car In US

A former Nigerian beauty queen and doctoral student in Philadelphia has been shot dead while sitting in her car in front of her family's home, and now her parents are hiding out of fear for their lives 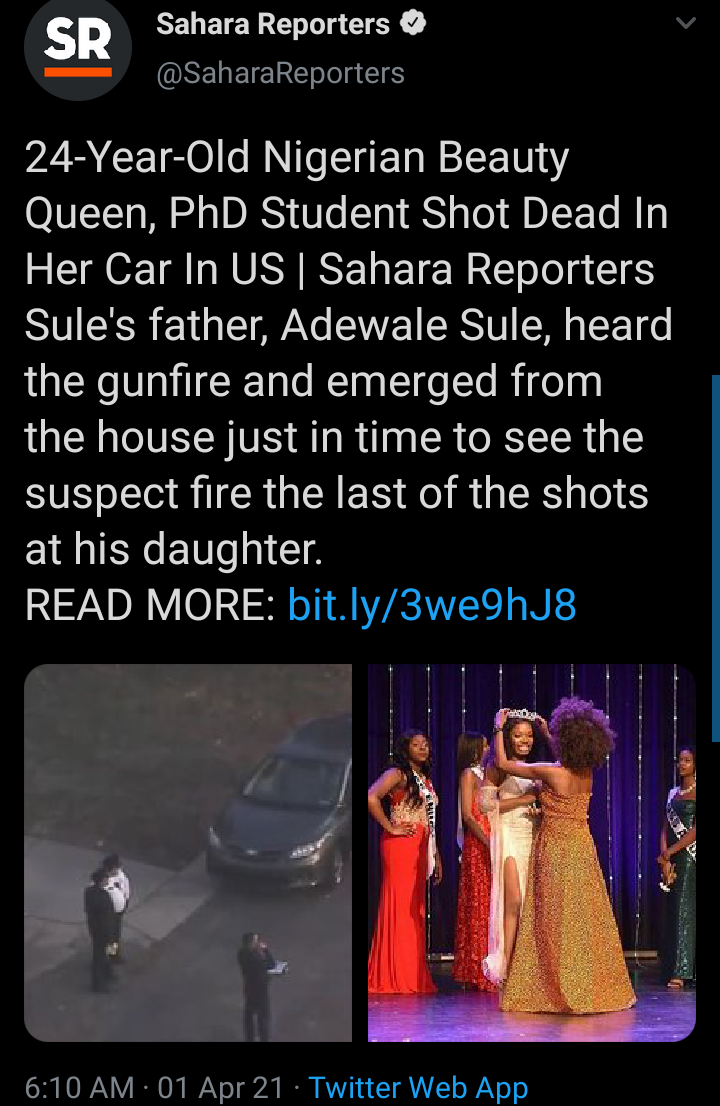 Najeebat Sule, 24, known to her loved ones as Najee, was killed shortly before 6pm on March 12, steps away from her residence in the 8800 block of Frankford Avenue.

Nearly three weeks later, police have not found a motive and have made no arrests, leaving Sule's family and friends searching for answers. She had only recently earned a Master's degree in public health.

Magaji was among the last people to have seen Sule alive before she was gunned down.

The two women had spent the night before at Magaji's home, eating snacks and watching Netflix together.

Less than 24 hours later, Sule was sitting in her grey Toyota Corolla, exchanging text messages with Magaji, when an unidentified man walked up to the vehicle with a gun drawn and shot her several times. 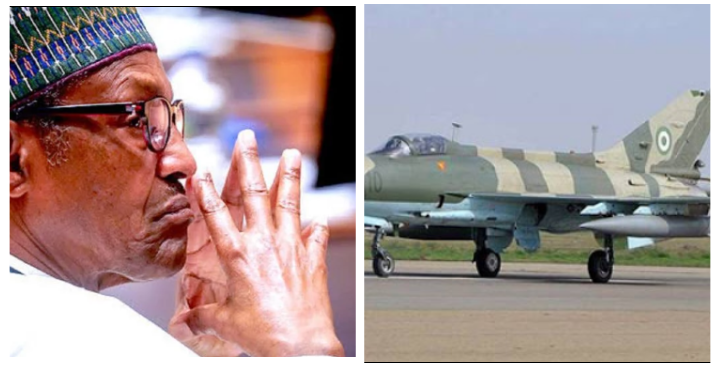 Stop Pushing Me, I Can Crush You All – Buhari To Bandits

They're arresting our Youth and taking them to an unknown place, it's unacceptable — Ohaneze Ndigbo.

Presidency Support For Isa Pantami: See 3 Reasons Why He Is An Indispensable Asset To FG

Buhari Sends Warning Message To Bandits, Check Out What He Said

19 Nigerians Have Been Arrested In Ghana, Check Out Their Offences

Why The U.S. Government Warns Its Citizens To 'Reconsider' Travel To Nigeria.