By NewsToday (self media writer) | 2 years ago

Worldwide condemnation has trailed Nigeria’s government the violent re-arrest of journalist and activist, Omoyele Sowore, on Friday (Dec. 6). It came less than 24 hours after Sowore and his co-accused, Olawale Bakare, were freed after 125 days in detention during which two courts had granted them bail. Government agents stormed the Federal High Court in Abuja, manhandled the journalist in full glare of world media.

Nobel Laureate, Wole Soyinka slammed agents of the Department for State Security (DSS). He called on all civil society organizations in Nigeria to unite and give a coordinated response against the government of president Muhammadu Buhari for violating the rights of citizens.

The horrific way agents of the DSS manhandled Sowore in court had also drawn the wrath of US Senators representing New Jersey where Sowore is a resident. After weeks of behind-the-scenes pressure on the government of Nigeria to release Sowore, Senator Bob Menendez (D-N.J.) with Opeyemi Sowore, the wife of Omoyele Sowore, came out in front of the world media to rebuke Nigeria.

“That is unacceptable in a country that calls itself a democracy. The world is watching,” the ranking member of the US Senate foreign relations committee said. He warned Nigeria that there would be consequences should anything happen to Sowore. 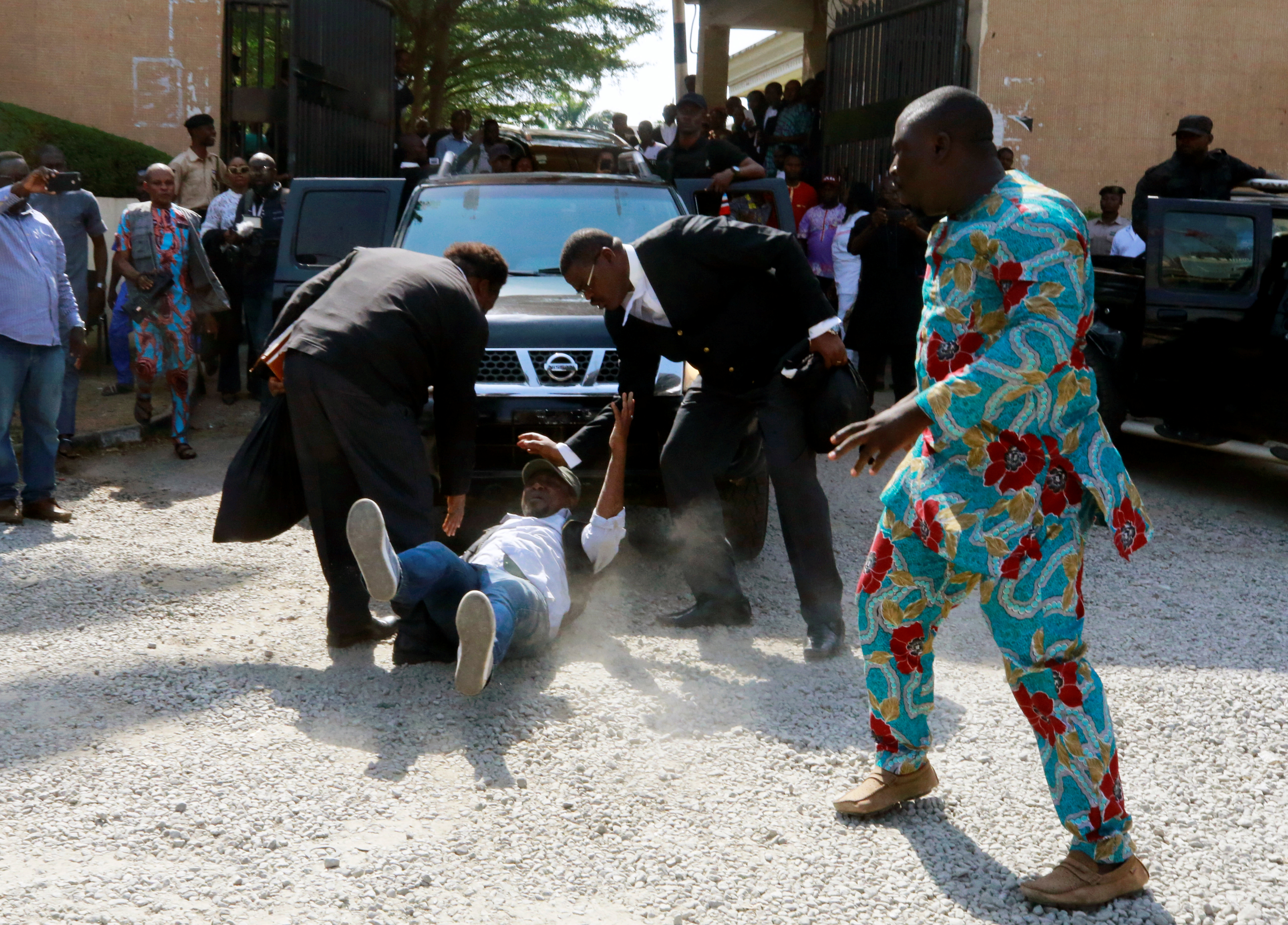 A man attempts to go under a Department of State Security (DSS) vehicle so to prevent Nigerian activist Omoyele Sowore’s re-arrest, outside the Federal High Court in Abuja, Nigeria Dec. 6, 2019.

Joining the criticism, the other senator from New Jersey, Cory Booker, took it up a notch. He warned Nigeria to pull back from its dangerous path. “This is a shocking affront to the country’s rule of law and Nigeria must cease its dangerous attacks on freedom of expression,” the Democratic Party presidential candidate said.

In their intervention, the US Department of State: Bureau of Democracy, Human Rights, & Labor also spoke out against Sowore’s re-arrest. In a reminder to the Nigerian government of what democracy entails, the department stated: “respect for rule of law, judicial independence, political and media freedom, and due process are key tenets of democracy.”

In a reaction to the global condemnation of the Nigerian government’s action, Garba Shehu, the senior special assistant to the president on media & publicity said on Sunday Sowore was a person of interest to the DSS and that the DSS was only exercising its power by rearresting Sowore.

He pivoted to the government’s talking point that accused Sowore of calling for a revolution to overthrow the democratically elected government of Nigeria. “He founded an organization, Revolution Now, to launch, in their own words, “Days of Rage”, with the publicized purpose of fomenting mass civil unrest and the elected administration’s overthrow,” Shehu said in a statement.

Nigeria’s government has gradually shown more authoritarian tendencies ever since February’s general elections when Buhari’s ruling party won a stronger mandate. Leaders, from governors up to the president, have been exercising maximum power and declaring any sharp criticism of their leadership as treasonous.

Some powerful state governors now regularly use security agents to arrest and intimidate journalists and activists who dare to question their actions or attempt to hold them accountable. At any point in the past year, governors of Kaduna, Cross River, and Bayelsa states have held one or more people in detention. Some of the higher profile journalists and activists currently in detention in Nigeria include Dadiyata Abubakar Idris, Stephen Kefas, Agba Jalingo and Jones Abiri.

Jones Abiri, publisher of Weekly Source in Bayelsa state, is facing terrorism charges. He was picked up in March while he was meeting with his staff. Previously, from July 2016 till August 2018, the DSS held him without charge and without access to his family or a lawyer.

More recently, during the Nov. 16 special elections in Kogi and Bayelsa states, journalists were attacked and prevented from doing their jobs, according to the Committee to Protect Journalists (CPJ). In Asaba, the capital of oil-rich Delta State, the editor of online news Big Pen Nigeria, Joe Ogbodu and reporter for the National Mirror newspaper, Prince Amour Udemude, are facing criminal defamation and disturbing the peace charges for exposing corruption in the oil industry.

Nigeria has long had a vibrant media and vocal civil society, which has been buoyed in the two decades since the country’s return to democracy in 1999. But the long history of military rule and authoritarian habits by past governments are baked into the political DNA. It’s worth remembering Buhari was a former military head of state in the mid-1980s.

But how the case of Sowore and other detained journalists are resolved will prove whether Sen. Bob Menendez was right when he said Buhari’s government behavior in the case of Sowore was “leading me to believe either that Nigeria is no longer respecting the rule of law or that president Muhammadu Buhari is woefully out of touch with what agents of his government are doing in his name.”

The question facing media practitioners in Nigeria is, if a high profile journalist like Omoyele Sowore, with a high profile lawyer, like Femi Falana, are going through this ordeal in the hands of the government, what hope is there for less known journalists?

Content created and supplied by: NewsToday (via Opera News )