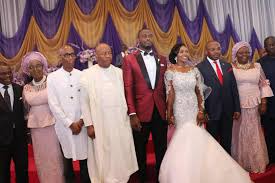 Chief Godswill Obot Akpabio, CON (born 9 December 1962), is a Nigerian lawyer and politician who is a Senator of the Federal Republic of Nigeria and the Senate's Minority Leader. He was also Governor of Akwa Ibom State of Nigeria from May 29, 2007 to May 29, 2015.

Godswill Akpabio is the son of Chief Obot Akpabio and Madam Lucy Obot Akpabio (née Inyangetor) of Ukana, Ikot Ntuen in Essien Udim Local Government Area. He was born on 9 December 1962. He lost his father early in life and was raised by his mother, who inculcated in him the values of hard work, discipline and honesty.

While at the Federal Government College, Port Harcourt, he was appointed the General Senior Prefect. In the University of Calabar, his charisma endeared him to the students and he was elected the Speaker of the Students’ Parliament.

Godswill Akpabio’s grandfather, Okuku Udo Akpabio, was the 1st Warrant Chief in Ikot Ekpene province. His uncle, Dr. I. U. Akpabio, was the Minister of Education/Internal Affairs in the then Eastern Nigeria. Justice Nsima Akpabio, his cousin, was a senator in the Second Nigerian Republic.

He is a Christian of the Catholic faith. Godswill is married to Ekaette Unoma Akpabio, the founder of Family Life Enhancement Initiative (FLEI), a non-governmental organization providing a platform for redirecting the focus of development efforts on the family as a strategy for achieving the Millennium Development Goals (MDGs).

Akpabio and his wife have four daughters and a son. Also a son from another woman, Glenn Udosen.

Akpabio had a brief stint as a teacher and as an associate partner with Paul Usoro and Co., a leading law firm in Nigeria.

He also worked with EMIS Telecoms Limited, a pioneer fixed wireless telecommunications company in Lagos, Nigeria. In 2002, he rose to the position of the Managing Director/Chief Executive Officer of the company. In this position, he helped in shaping the future of the burgeoning telecoms industry. He had earlier served as the National Publicity Secretary of the Association of Telecommunication Companies in Nigeria, (ATCOM), while a director of EMIS.

In 2006, he aspired for the governorship of Akwa Ibom State in a hotly contested primary election and defeated 57 other aspirants to emerge the candidate of the People’s Democratic Party (PDP). His campaign with the slogan, “let God’s will be done” received mass support and was elected Governor in 2007. He was re-elected for a second term in office as Governor of Akwa Ibom State in 2011.

In 2013, he was elected Chairman of the newly formed PDP Governors Forum.

In 2015, he contested and won the Senate seat of the Akwa Ibom North West (Ikot Ekpene) Senatorial District to represent the district in the Senate of the Federal Republic of Nigeria. Running under the platform of the People’s Democratic Party (PDP), he polled 422,009 of the 439,449 to defeat Chief Inibehe Okorie of the All Progressive Congress (APC) who recorded 15, 152 votes to be declared elected by the Independent National Electoral Commission (INEC).

The advent of Godswill Akpabio as Governor of Akwa Ibom State on 29 May 2007 marked the beginning of the state's transformation.

Government policies and programmes in virtually all sectors of the economy have impacted positively on the lives of the people since Akpabio’s inauguration as the third democratically elected governor of the state, eight years ago, making a turnaround for good in the story of the state.

In 2008, Sahara Reporters claimed Akpabio gave a $500,000 Mercedes Benz GL 450 to Farida Waziri, the Chairwoman of the Economic and Financial Crimes Commission (EFCC). In an attempt to debunk the corruption case, Akpabio arranged for certain reporters to a private viewing that the car was in fact one of those in the governor security details. The ploy was uncovered when the chassis number WDC 1648722A390877 on that displayed car was different from the car that was given as bribe to Waziri, which had chassis number WDC 1648711A 390877.

Another damning evidence against Akpabio was that the car's licence plate SB 456 AAA, which Governor Akpabio claimed was in his security pool, was issued to one Chief C. Orizu of Adotolo Nnewi in Anambra State, and not to the Akwa Ibom State Government.

To lay the case to rest, the Chief Press Secretary to Gov. Akpabio, Usoro Usoro on Tuesday, 1 June 2010, invited journalists to Government House, Uyo, to confirm that the said car was still in the governor’s fleet. Checks by the journalists confirmed that the chassis number of the car quoted in the report actually belongs to one of the security vehicles used by the governor.

Usoro emphasised: “Gov. Akpabio is not under any investigation by EFCC, hence, has no reason to offer bribe to anybody. He does not even believe or support bribery in any form as that would be contrary to his firm stand against the entire body of corruption”.

His milestones as Governor of Akwa Ibom State have earned him several honours and accolades around the world.

We had no doubts (in our minds) because light is stronger than darkness. We had no worries because with the momentum of our collective faith we can cross the widest river, climb the highest mountain, and topple the most fearsome Goliath

Excerpt from a speech entitled, “The Battle Is Over”, delivered at an interdenominational thanksgiving service in Uyo on 24 March 2008, following his victory at the Court of Appeal in Calabar, Cross River State.

Democracy is an objective, and democratization is a process; and we as a nation are democratizing and getting nearer the mark everyday

Excerpts from an address to the people of Akwa Ibom State on the occasion of the 13th Anniversary Celebration of Democracy Day, 29 May 2012.

Being an excerpt from the second term inaugural address as Governor of Akwa Ibom State, Nigeria on 29 May 2011.

Together we can build a bridge between a past we would rather forget and a future, which brims with hope

Excerpt from a keynote address on the occasion of the opening of the Workshop for Heads of Maritime Administration in West and Central Africa, in Uyo, 18 June 2012.

Excerpt from an address presented at the 4th National Roundtable for Proactive Laws and Good Governance in Nigeria, held in Abuja on 28 July 2008.

Excerpt from an address presented on the occasion of the 2010 May Day Celebration held at Ibom Hall Grounds, IBB Avenue, Uyo, on Saturday, 01 May 2010.

Excerpt from an address presented on the occasion of the 2010 May Day Celebration held at Ibom Hall Grounds, IBB Avenue, Uyo, on Saturday, 01 May 2010.

Ideas drive human progress. Whether the dream is about reaching marooned villages in the back waters of a third world country or conquering the moon, the very first step needed takes place in human thought

I believe strongly that power is ephemeral. Today you have it, tomorrow you have not. Do not allow power to get into your head

Excerpt from an address during the swearing in of local government chairmen in Uyo, 27 June 2008

I came into government to correct the ills of the past

Excerpt from an address during a reception in his honour by the people of Ikot Ekpene Senatorial District, 02 June 2008

I am only a servant of the people of the state. So whatever the people say, that I will do

Excerpt from a press conference in Uyo, April 2008.

Our people will no longer be used by others as servants and hewers of wood. Our government is engaged in a war against poverty and infrastructural decay. We must win for our children to have the freedom to engage in industry and commerce

Excerpt from an address to the people of Akwa Ibom State to mark his one year anniversary as Governor of the state, 29 May 2008.