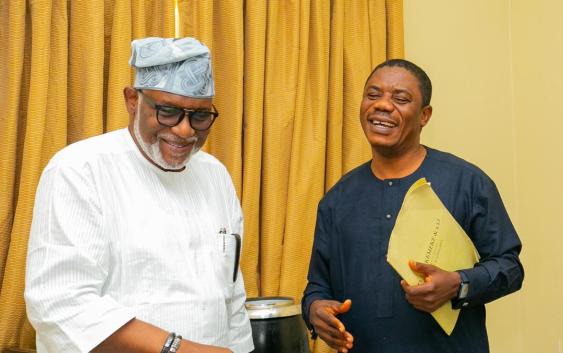 As if by divine inspiration, Governor Rotimi Akeredolu of Ondo State once identified what had become Chief D. I. Kekemeke's greatest asset in his quest to become Governor's Successor in the upcoming state governor 's elections. It is now well known that Kekemeke is the most experienced of all the gubernatorial aspirants. This was identified and pointed out by Governor Akeredolu.

Speaking at the Cocoa Conference Hall of the Governor's Office in Akure on 23 February 2017, the Governor said, "apart from Governor Mimiko, my Chairman, D. I. Kekemeke, is the most seasoned politician in the state of Ondo." Demola Ijabiyi, Chairman of the Strategic Mobilization and Communication Committee of the Lekeleke Movement, has responded to this.

Imitating the Biblical response when Peter described Jesus as the Messiah, Ijabiyi said, "This reality did not come to him from any human being, but it was given to him directly by God. He further pointed out that Kekemeke was once a member of the House of Assembly, and that he was the founding chair of the National Examination Council (NECO), which contributed to national and international recognition.

He was the Attorney General and the State Justice Chief. He transferred from the Ministry of Justice to become the Commissioner for Infrastructure, Lands, Housing and Transport. Then he rose further to become Secretary of State Government. In addition, he was the Pionier Secretary of State of the People's Democratic Party and later the Pionier State Chairman of the APC.

Ijabiyi then asked, "Which of the candidates can boast of this kind of intimidating credential? "Continuing," he said, "you can see that he has brought this experience to bear on his campaign method and style. Among the aspirants, his campaign is the most mature and based on his mission and vision for the stability and peace of the State.

According to him, the Secretary of State for Publicity, Mr. Alex Kalejaiye, recently said in the African Independent Television Programme, "Chief Kekemeke has been running a really good campaign across the state in the last few weeks, and I just wish and hope that other candidates will copy a lot from him. Ijabiyi, who was obviously excited about this recommendation, recalled that Kalejaiy was not the

Barrister Sola Ajisafe alias Templars, a senior official of the State Government and loyalist to Governor Akeredolu, recently wrote in WhatsApp 's message, "D. I. It's Kekemeke. Has conducted a most robust, well-founded and reasonable campaign to earn my respect and that of the party. We note it because it remains a powerful pillar of our community.

Check below link for more details