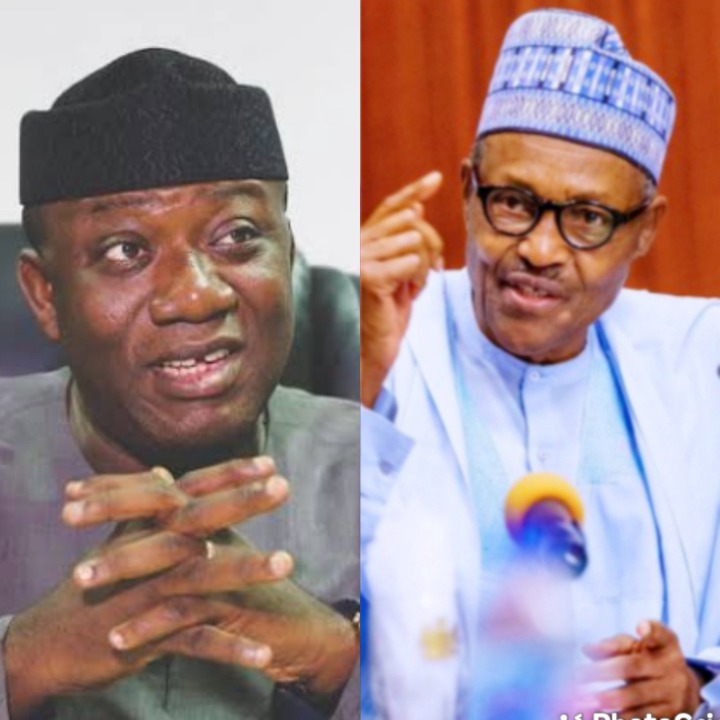 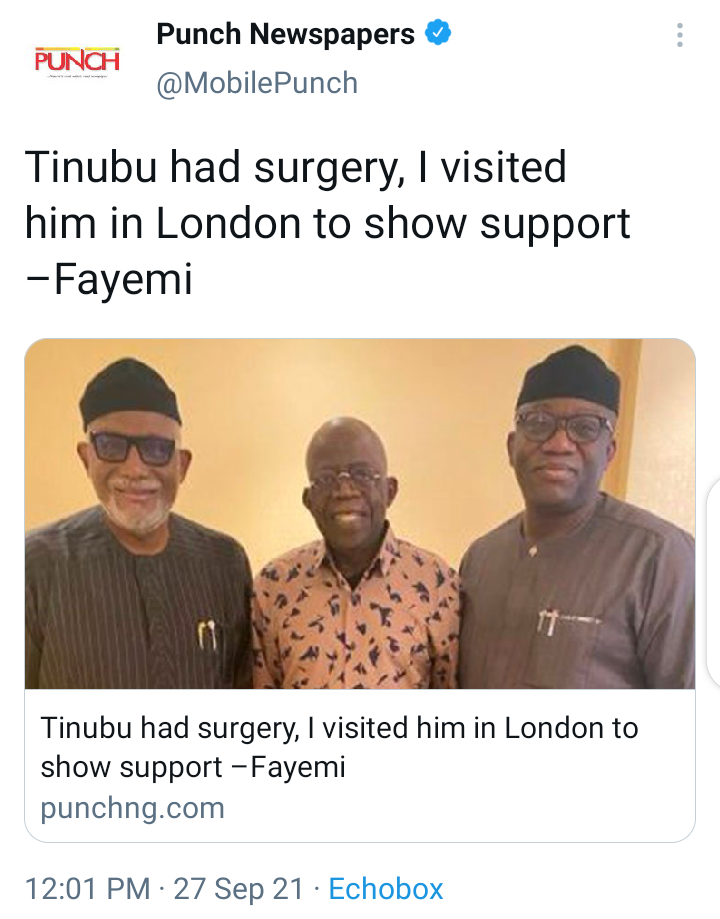 Ekiti State Governor and Chairman of the Nigeria Governors’ Forum, Kayode Fayemi, has said that he visited All Progressives Congress National Leader, Bola Tinubu, in London recently to show support for the ailing politician.

Fayemi made this known on Sunday when he spoke on THISDAY Live, an interview programme on Arise TV monitored by The PUNCH.

According to the governor, Tinubu had surgery and he had visited the former Lagos State governor alongside his Ondo State counterpart, Rotimi Akeredolu, to show solidarity.

Fayemi also said his visit to Tinubu was not connected to the 2023 general elections.

The governor said, “He (Akeredolu) and I were in London together to see our leader, Asiwaju Bola Ahmed Tinubu, but it had absolutely nothing to do with 2023 presidential plans whatsoever. That’s not the reason why we went there.

“Asiwaju had surgery, it is simply proper etiquette or behaviour both in the part of the country where I come from but also generally that when a friend and elder is undergoing health challenges, it would be improper on your part not to show solidarity and support.

“That is simply what took us there; we wanted to associate ourselves with him at a time of need and as an elder, as a mentor and as a big figure in our political party, nothing wrong in paying him a courtesy visit to check on him to see how he was faring and we did that and we returned.

Northerners Are Happy Buhari Is In Power-Sule 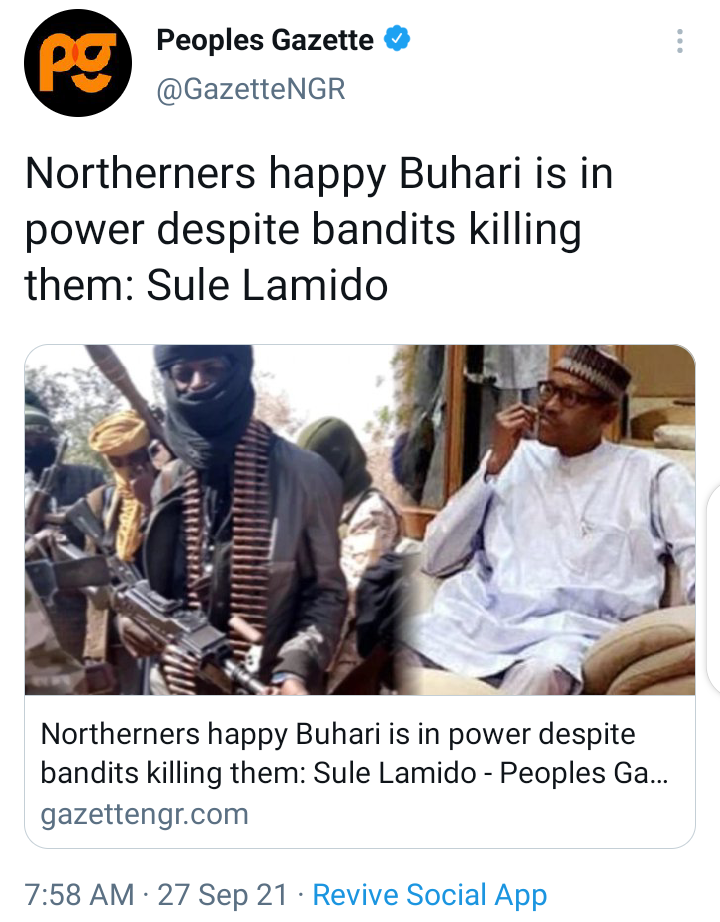 Governor Sule Lamido of Jigawa says northerners are happy with the APC regime despite wanton violence ravaging the North because President Muhammadu Buhari is one of their own.

“We see Nigeria as at my own time, ‘our own son’, ‘our own tribe and whatever he does’… I mean, people in the North are dying every day. We are not safe or secure,” Mr Lamido said in an interview with Channels TV on Sunday night.

When asked for his views on Boko Haram and bandits ravaging the North-East and North-West respectively, Mr Lamido, who has a pending case with the Economic and Financial Crimes Commission (EFCC), blamed increased insecurity on political leaders’ insincerity.

“It is this culture of telling lies to citizens during elections. When you raise their hope, by the time you come to government and fail to fulfil their needs, of course, you are going to be in trouble,” the ex-governor explained. “So these are some of the policy consequences of telling lies in campaigns. Leaders are not honest, sincere, and there is nothing called justice.”

Nigeria Peaceful In Spite Of Pockets Of Insecurity- Gov Bagudu 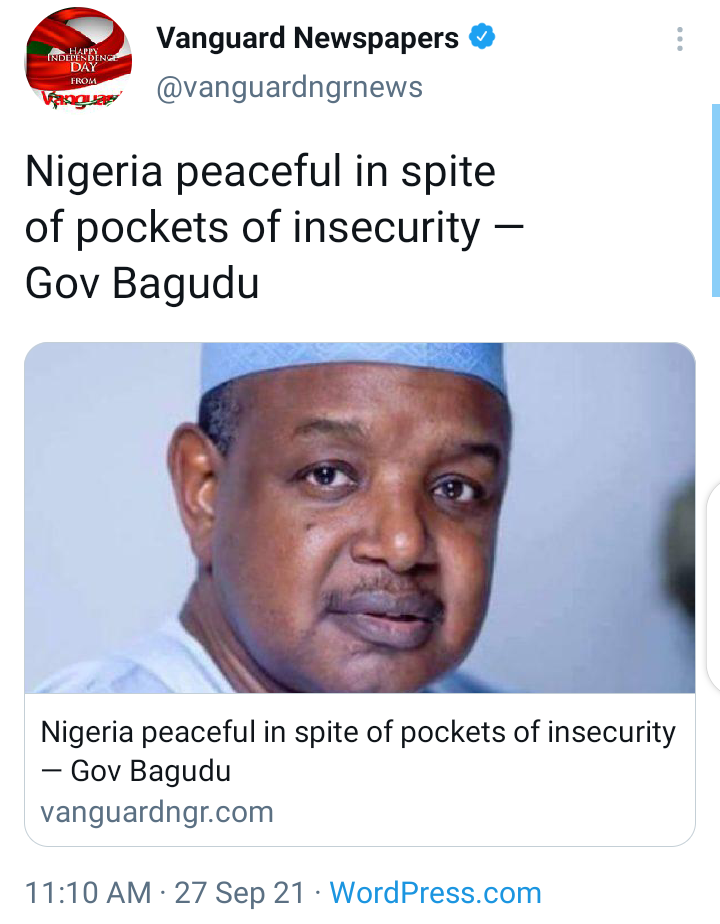 The Kebbi state governor, Alhaji Atiku Bagudu, says Nigeria remains largely peaceful, in spite of the pockets of insecurity in the country.

Bagudu stated this at the closing of the 2021 edition of the Argungu Polo Tournament, in Argungu Local government area, on Sunday, at which NSK Argungu Polo team defeated Ayutan Polo team in the tournament.

He said,” in spite of unimaginable acts by some few individuals who do not wish the country well, Nigeria still remains united.

“The conclusion of the polo tournament we have witnessed today is a testament that Kebbi state and Nigeria are on an unstoppable march to greatness in sports and other areas of human endeavours.”

He said that the 2021 edition of the tournament was very successful as the state was proud to host the 2021 World Tourism Day scheduled for Sept. 27.