Iran Vs Saudi Arabia: How The Two Middle East Super Powers Compete In The Region

By MbuyaziEmmanuel (self media writer) | 3 months ago

The global stage might be for the US, Russia, and China to compete for influence and control, but In the Middle East, two nations command the greatest influence: Saudi Arabia and Iran. These two countries happen to be the home of Islam's two major sects, Sunni and Shia. Iran and Saudi Arabia represent today the ancient rivalry between these sects which has today evolved into a fierce political contest. Almost all major conflicts in the Middle East today are like a battleground of the proxy wars between Saudi Arabia and Iran. 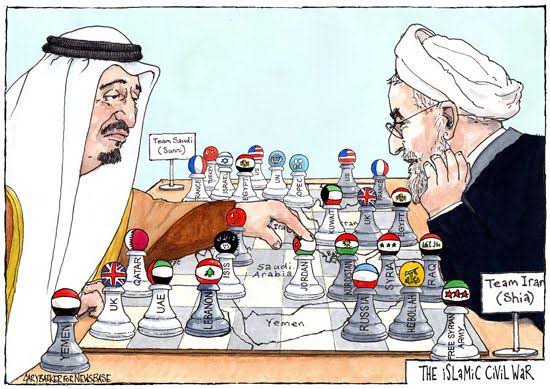 Iran and Saudi Arabia have never clashed engaged in a direct military confrontation. Like the US and Russia, they also have demonstrated their strengths through proxy wars in other Arab and Muslim nations in the Middle East and across the world. Driven by religious ideology and conviction as well as the battle for political relevance and dominance inspired by their history as conquering nations, Iran and Saudi Arabia are far away from agreeing.

The evolution of Saudi Arabia began in 1744 after the partnership between Muhammad bin Saud and Muhammad bin Abd al-Wahab. By 1932, Saudi Arabia had completed its political evolution as a globally recognized modern sovereign nation. As the custodian of Islam's most holy cities, Mecca and Medina, Saudi Arabia thus become the birthplace of Sunni Islam and the symbolic representative Sunni sect globally. 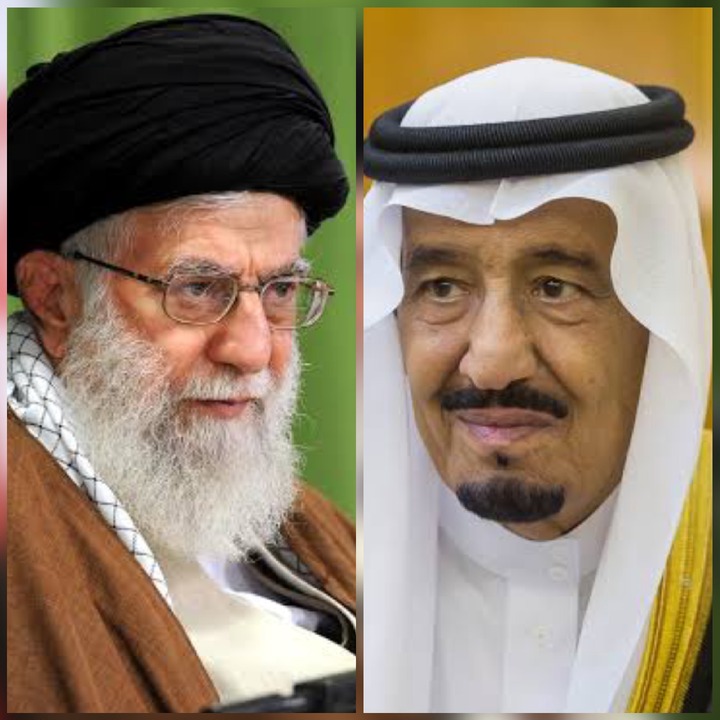 Iran on the other hand is the home of Shi'ism. The home base of what they regard as the rightful successors to Prophet Mohammed(PBUH), through his daughter Fatima and his son-in-law Ali(Islam's 4th Caliph). But the political evolution of Iran is very ancient, known originally as Persia, the history of Iran goes as far back as 678 BC. By 1979, the Islamic Revolution in the country brought the Shia clergy to power and the emergence of the Ayatollah as that nation's supreme and spiritual leader.

Backed with oil money, Iran and Saudi Arabia, as representatives of Islam's oldest rival sects continues the rivalry to date, spreading and supporting their respective sects in nations in the Middle East and across the world. Also, as conquering empires, the ambition to extend their influence across the Middle East has led to more clashes between them. In the middle East, there are moments in which Iran and Saudi Arabia have taken their rivalry into other countries in the region. 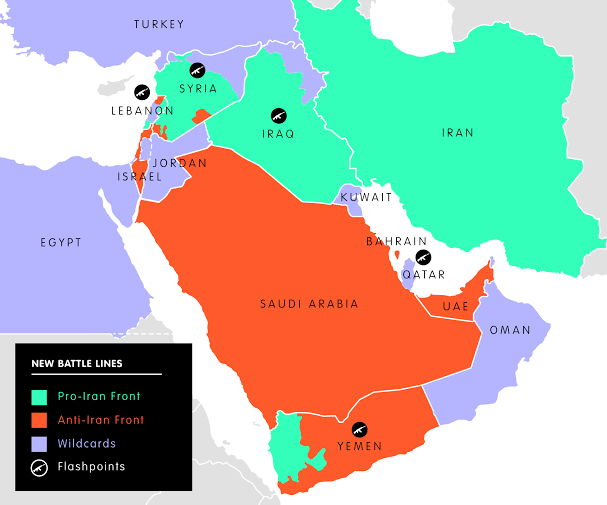 The spheres of influences of Saudi Arabia and Iran in the Middle East (Image: European Council on Foreign Relations)

Afghanistan is one country Iran and Saudi Arabia had taken their contests to. Afghanistan is a predominantly Sunni Islam nation with about 20% Shia population. Sharing a border with Iran, the Ayatollah government has always backed the Shia in Afghanistan. Alarmed by Iran's influence in the Afghan nation, Saudi Arabia too has supported the Sunni sects in Afghanistan against the Shia. In Yemen, during the country's civil war, Iran supported the insurgent Houthi rebels who are a sect of Shia Islam against the central government which had the backing of the Saudi government. Although Saudi Arabia has no love for the Yemenis, to halt the influence of Iran in the neighbouring nation, it has to render its support. 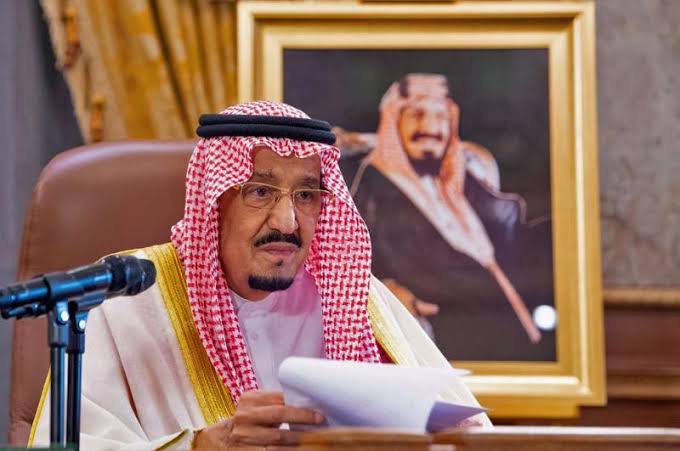 King Salman of Saudi Arabia, the portrait behind him is that of the founder of the President Saudi Arabia, King Abdulaziz bin al-Saud (Image: Arab Weekly)

In Syria, Saudi Arabia and the US-backed the rebels against the government of Bashar al-Assad during the country's civil war. But Russia and Iran backed al-Assad to remain in power and to fight against the rebels. Hezbollah, the Shia militant group based in Lebanon and backed by Iran was in Syria during the civil war on the government side. Lebanon is also a theatre for Saudi Arabia and Iran to waxed their muscles. Lebanon has a sizeable Shia and Sunni Muslim population. Saudi Arabia has continuously backed the Hariri family's stronghold on the Lebanese government, to check the growing influence of Iran in the country, owing to the militant presence of Hezbollah. 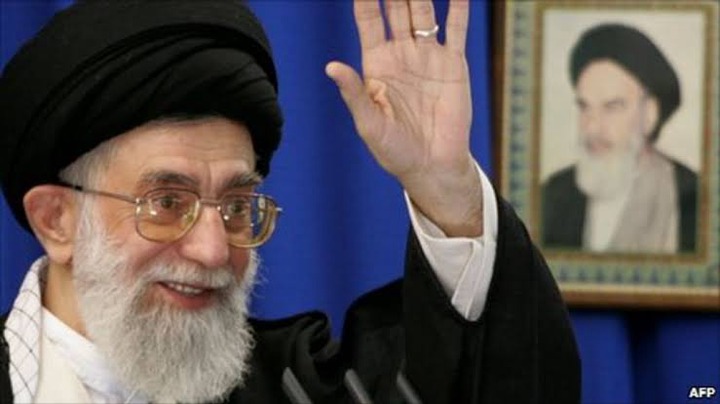 Ayatollah Ali Khamenei of Iran. The portrait behind him is that of the founder of the Islamic Republic of Iran, Ayatollah Ruhollah Musavi Khomeini(Image: BBC)

In Iraq too, Iran and Saudi Arabia are battling to influence the country. Iraq is made up of over 60% Shia population and 34% Sunni, based on sectarian solidarity, Iraq will be largely pro-Iran than Saudi, and this is very alarming to Saudi Arabia since it happens to share a border with it. During Saddam Hussein, a Sunni Arab, Saudi Arabia and Iraq had closer ties. Saudi Arabia backed Iraq during the Iran-Iraq war in the early 1990s.

Iran and Iraq have turned the Middle East into their theatre of proxy wars, supporting and/or instigating uprising in nations that support or are against their political interests. It is noteworthy, in my opinion, that I did not regard the contest between Saudi Arabia and Iran as a religious one, but owing to their position as the custodians of Faith's two major sects, they exploit the sentiments of the rival ideologies for their own political and economic gains, in the middle east and across the world.

"Saudi Arabia And Iran Must End Their Proxy War In Syria", The Guardian(UK), December 2013.

" Iran And Saudi Arabia In Afghanistan", The Diplomat