By AbbeyBMogaji (self media writer) | 2 years ago 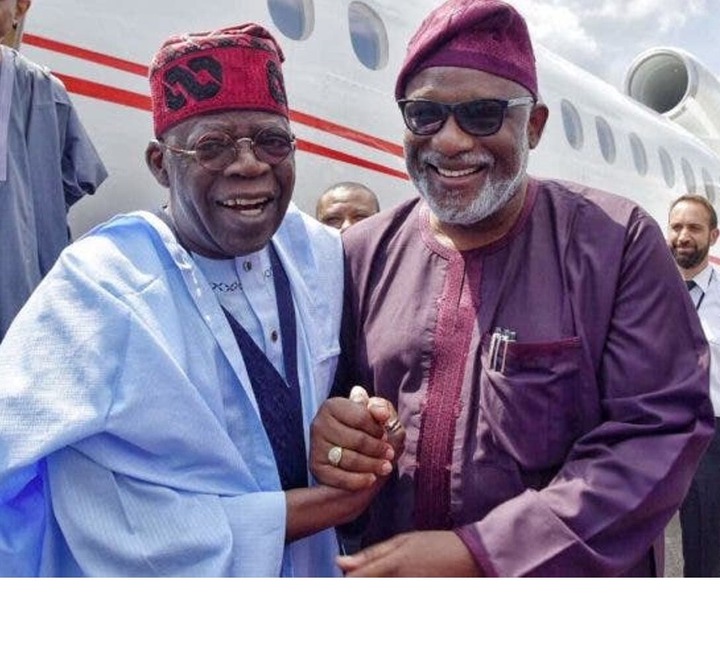 In 2012, Governor Oluwarotimi Akeredolu was protégé to the former governor of Lagos State, Asiwaju Bola Tinubu. Asiwaju brought Akeredolu under Action Congress of Nigeria (ACN) to contest against the then governor, Dr. Olusegun Mimiko of Labour Party. Unfortunately, Akeredolu lost to Mimiko.

In 2016, things went sour between Akeredolu and Asiwaju, as a result, Dr. Olusegun Abraham became the preferred candidate of the APC national leader. Akeredolu jostled with Abraham and defeated him to the second position in the APC primaries. Tinubu did not give up, instead, he went to sponsor Chief Olusola Oke in Alliance for Democracy (AD). The rift between Akeredolu and Asiwaju Tinubu was waxing stronger until early this year when the governor needs the party’s ticket for his second term ambition. Akeredolu needs second, Tinubu wants presidents, the duo need to find a common ground.

In the meantime, there are indications now that the rift has been pushed aside and Tinubu has given his support Akeredolu’s second term bid. The following are the evidence to prove: Governor Akeredolu has pleaded with his governors colleague to apologize to Tinubu on his behalf. On a different occasion, party leaders and stakeholder are seen in Tinubu’s house to meet and plead with him to forgive the governor.

Barely ten hours to the commencement of the APC primary held on Monday 20th July, Dr. Olusegun Abraham, the purported choice of the Asiwaju Tinubu withdrew from the governorship race and stepped down for Governor Akeredolu. The political undertone of Abraham’s withdrawal and a source close to him suggest strongly that it was Tinubu who ordered Abraham to step down for Akeredolu.

Governor Oyetola is loyal to Tinubu to the core. He is seen working assiduously through the APC South West Cancus to reconcile the APC aggrieved leaders and members. This is a task that he would be lackadaisical about if the rift between Akeredolu and Tinubu still exist.

4. Tinubu’s boys are cooperating with Akeredolu

The Asiwaju has his political tent spread across the six states of the South Western part of the country. His boys and loyalists have been demonstrating a sort of change of mind towards Akeredolu’s second term ambition. Most of the members and leadership of the unity group who are Tinubu’s political associate are becoming soft with Gov Akeredolu, and the body language suggest that they are willing to negotiate with the governor. This is a clear indication that the governor has been able to settle the rift with Asiwaju Tinubu.

Content created and supplied by: AbbeyBMogaji (via Opera News )