By Ade_write (self media writer) | 1 month ago

Just as everyone has expected, Nigeria is fast growing into a nation that many people have dreamt of before now. Some states in the southwest are beginning to work on their infrastructure system.

Just as Oyo State joined the league of state with an airport, the executive governor of Ekiti State, Dr Kayode Fayemi, has found it worthy of constructing a cargo airport in Ekiti.

It was reported by Wazobia Reporters and confirmed by Lere Olayinka that the owners of the land gathered around the airport ground to demand compensation for their affected land.

After looking at the whole situation, it is my opinion that Governor Kayode Fayemi needs to look at how Engineer Seyi Makinde is dealing with his own people. Earlier today, Engineer Seyi Makinde made it known that his administration was thinking of building an Airforce base beside the Airport, and, according to the governor, he said he has spoken to his minister to inform the residents of those areas and to duly compensate them. Going forward, Governor Fayemi can also adopt any of these two options to solve the issue in Ekiti too. 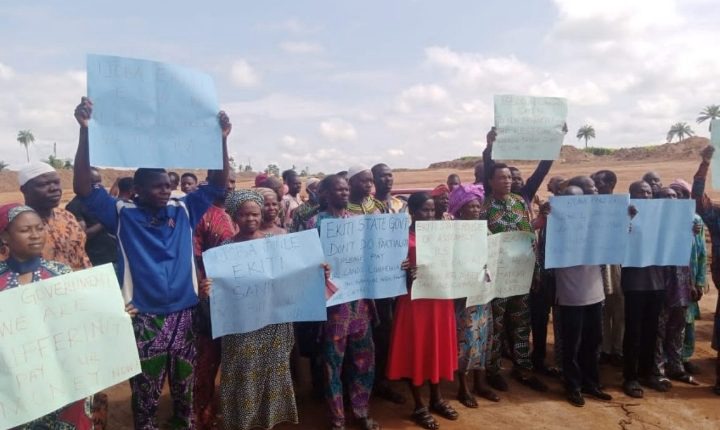 To solve this case, Dr Kayode Fayemi can find a way of compensating these sets of farmers with cash. It was reported that the majority of the people that protested today were farmers. Their lamentations were because they do not have any other job aside from farming. So, if they are well compensated, they can go elsewhere to get more productive land to continue their farming and hunting jobs.

2. Also, the governor of the state can compensate the landowners with lands in other places or a house for another house.

One of the farmers was given an avenue to speak on behalf of the other, and what he said was that "it is the government that said people should embrace farming, but here we are now, after so much investment in cocoa, plantain, cassava, palm tree and other crops, the government came to destroy them."

In this case, it will be so nice if the farmers that lost their farmland due to the airport construction are given another land in a better and productive environment and also, house owners should be compensated with another house in a good and better location too.

Although, the project coordinator, Mr Awotikun, made it clearer that the government is working on the compensation scheme and soon all the affected people would be duly compensated. There is no pain without gain, when a project like this is put into consideration, some people will indeed be affected maybe positively or negatively. What do you think about the farmers action today.

Content created and supplied by: Ade_write (via Opera News )