Nyesome Wike has never been far from the headlines since he became the Governor of River state. He has fought almost everyone at one time or the other on various issues ranging from politics to civil matters. Few months back, you will recall that Nyesome Wike demolished a hotel for flouting the lockdown order in River state without proper procedures required to carryout such actions. Just yesterday 16th of July, 2020 Joy Nnueih's residence was surrounded by Police officers acting on a warrant to arrest the ex NDDC boss but Nyesome Wike in a commando like style rescued and shielded Nnueih from the siege on her residence by police officers. Joy Nnueih was supposed to be in the House of Assembly to answer questions as regards the eighty billion naira that was said to have been spent by the NDDC under her watch between January to May 31st 2020 but she refused to show up. 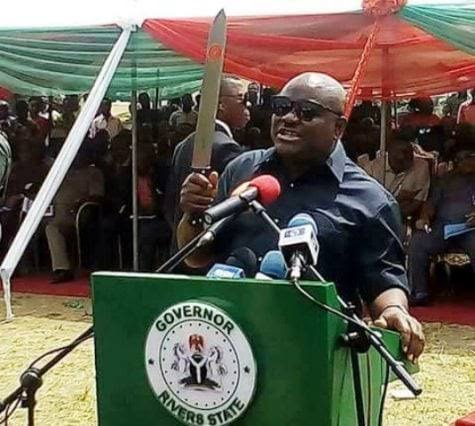 Few months back, Nyesome Wike was seen in a video insulting royal fathers in his state, it was almost like a principal to student like discussion where Wike was seen to be talking to old men like kids. He called out one of the royal fathers in the hall by calling him "small boy back then running errands", he was widely criticized for such but he doesn't seem to care.

This are just few of the dictator like actions/steps Nyesome Wike has taken over the past 7 months, he seem to feel unstoppable as a Governor and has not cared to think about the consequence(s) of his actions.