Melania Snubs Trump, Walks Away from Him at Photo-Op After Leaving the White House [VIDEO]

By Komeovie (self media writer) | 1 year ago

On Wednesday, Donald and Melania Trump left the White House, where they had lived as part of their roles of President and First Lady for four years, for the final time before Joe Biden was sworn in as the 46th President.

Over the course of Trump's presidency, several videos have emerged in which Melania has repeatedly snubbed her husband, refusing to hold his hand on several occasions. Now, video footage of the couple's arrival in Florida has left many wondering if Melania even cares anymore as she is seen snubbing Trump once again. 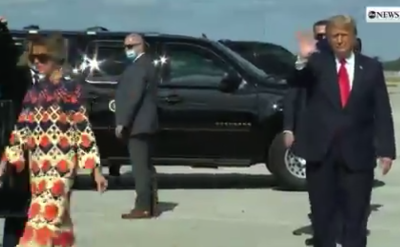 A still from the video that is being circulated on social media. Twitter

The footage shows the couple arriving in Florida yesterday after departing Washington. Trump and Melania flew from Joint Base Andrews in Maryland to West Palm Beach in Florida. However, Melania wasted no time on the tarmac and made straight for the waiting car to head to Mar-a-Lago.

As the couple emerged from the steps of the Marine One helicopter, Trump stopped and waved for the cameras but Melania continued walking, evidently with her own agenda, ignoring the cue to pause and leaving her husband stranded. Watch the clip below:

If "I'm over it" were a person.  pic.twitter.com/CLA8WucyXX

'How Long Before the Divorce?'

The clip was widely circulated on Twitter, garnering millions of views on the platform. It was only a matter of time before social media users started speculating about the end of Trump and Melania's marriage.

"Melania not posing with Trump after descending the stairs off yesterday's plane to Florida spells imminent divorce," wrote one user, while another added, "How long before the divorce?"

Melania also became the subject of memes with one user commenting "Melania said: My contract to pretend ended 7 min ago," while another wrote, "Melania when it's 12:01 and her shift ended at 12:00."

Users on Twitter had plenty of fun imagining the inner monologue Melania was having at the time. "I'll be in the car," wrote one person. "I'm so over this," suggested another. One person pointed out that her dress "screams, 'I'm on vacation, bitchez!''

Content created and supplied by: Komeovie (via Opera News )