The former 'de facto' leader of Burma Aung San Suu Kyi has denied the charges of electoral fraud imposed against her during a new trial held inside the Naypyidaw prison, the Burmese capital. 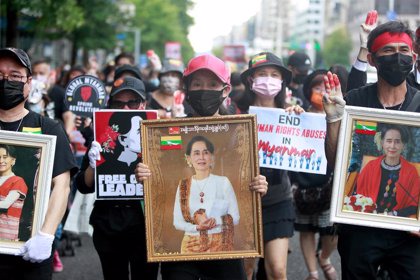 Suu Kyi, who has been in said prison since June awaiting trial, has denied the charges imposed in relation to article 130 of the Penal Code and the accusations of having influenced the Electoral Commission to gain victory in November 2020 elections.

Sources close to the matter have indicated in statements to the newspaper 'The Irrawaddy' that former President Win Myint and several former senior government officials have also been charged within the framework of the trial.

However, the same sources have confirmed that Suu Kyi "has assured that she did not influence the commission's decision and that she acted legally." Myint has also denied the charges.

The Burma Army took control of the country on February 1, 2021 after a coup d'état, assuring that electoral fraud had occurred during the elections. The board later overturned the results.

The board has filed more than a dozen charges against Suu Kyi, who if found guilty could be sentenced to more than 150 years in prison. The 77-year-old politician has already been convicted of corruption, incitement to uprising and violating restrictions imposed to deal with the coronavirus pandemic. She has so far been sentenced to eleven years in prison.

On June 22, she was transferred to a prison and placed in isolation, which has sparked controversy and has drawn criticism for her state of health and her advanced age.

Content created and supplied by: Presstar10 (via Opera News )