There are some who are concerned but Russia has a different political system from the US. The reason why he has been in power for 17 years is because he has been changing Russia for the better. Under him the economy recovered and the GDP of Russia increased. The standard of living increased. 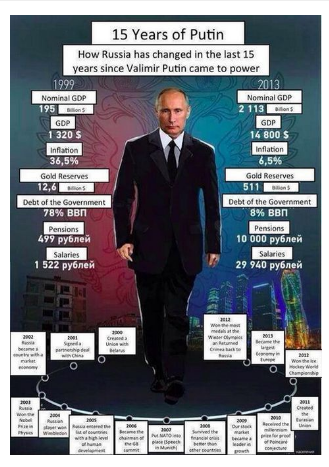 Maybe they think that there is no one viable to replace him. It seems throughout history, Russia has always done much better under a strong, authoritarian leader. Mikhail Gorbachev tried to make the Soviet Union more liberal with perestroika. And what happened? The Soviet Union collapsed overnight. Boris Yeltsin was very pro-Western. Bill Clinton loved him. The EU loved him. He was the man to finally make Russia open up to the West! And what happened? The financial crash of 1998. Russia was a broken, gutted nation filled with despair and misery. The West pretended to help Russia, but in reality all they did was give them loans with sky-high interest. And the fact that Yeltsin was a drunken ass-clown. Not to mention the rise of the oligarchs. Basically the West failed to really help Russia. When Vladimir Putin was elected, everyone expected him to be controlled like Yeltsin. But it would not be “meet the new boss, same as the old.” Putin kicked out the mega-banks, stripped most of the oligarchs of power and took back control of Russia. And by the way, Putin was actually pro-EU and pro-NATO when he first became president. Just read some of his early quotes. He really did want to engage more with the West.

But sadly, the West does not want partners. They do not want cooperation based on mutual respect. The West only wants vassals. Yes-men. Puppets. They can’t stand the idea of a nation having its own interests and goals. I suspect that’s what all this NATO build-up and sanctions is all about. It has nothing to do with Ukraine. It’s about destabilizing Russia and trying to force it to bend the knee. But surrendering just ain’t in the Russians nature! So, Putin restored Russia’s place in the world, raised the living standards, got rid of the debt, modernized its’ armed forces and made it a force to be reckoned with. While I don’t like how he arrests journalists and politicians who disagrees with him, he does appear to be a strong leader who cares about his country and his people, unlike our EU leaders! I just can’t bring myself to hate him. I think he is a dictator, but he makes 1000 times more sense than all the EU leaders and Trump, Bush, Obama and Clinton combined!

Love him or hate him, you cannot disagree with a single word of his speech at the 2015 UNGA!