A good remark Senate Chief Whip Orji Kalu made on Nyesom Wike at the weekend in Lagos is not the first of its kind the former governor of Abia State would pass on the Rivers State Governor. 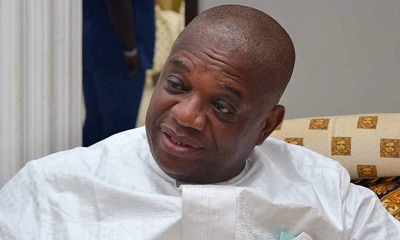 Interestingly, Orji Kalu had done the same thing early this year while on a working visit to the state and even begged the Governor to become a member of the All Progressive Congress, APC.

Recall that the Senate Chief Whip had commended the Governor for his giant strides in infrastructural developments at the 2020 Sun Newspapers Award ceremony at the Eko Hotel, Lagos.

Wike who was chosen as "The Sun Man of the Year" was described as the right person for the award. Kalu, who is also the Publisher of the Newspapers, described Wike as “his good friend who has not allowed political differences to separate them.” 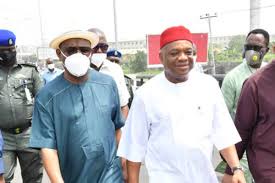 Governor Wike has, on many occasions, debunked any moves of him defecting to the ruling party. However, Orji Kalu on 19th February 2021 had appealed to him to decamp from his party and link the state to the central government that is being ruled by the APC.

The ex-governor had, on invitation, taken official and unguided tours of projects around the state capital led the state Governor himself. In a viral photo, both and other top government officials were spotted inspecting Okoro-Nu-Odo Flyover in Obio-Akpor LGA of the state.

While speaking after the inspection tours, Kalu had described the infrastructures being put in place as quite amazing. He had also commended him for his efforts in investments in critical infrastructure.

He, therefore, beckoned on the Governor to join the APC to consolidate on the rewards of belonging to the party at the center. This is contained in a report published by Pmnewsnigeria.

Kalu had also appealed to Wike to soft-pedal on his continuous criticisms of the All Progressive Congress and to work harmoniously with the Federal Government of Nigeria.

Of course, Wike, a PDP Governor has been one of the unapologetic critics of the Buhari-led administration. He has disagreed on many policies and accused the government of some national issues.

Recall that he was the first governor in the south to fight FIRS on VAT and, has been a strong voice on Open Grazing law, and others.