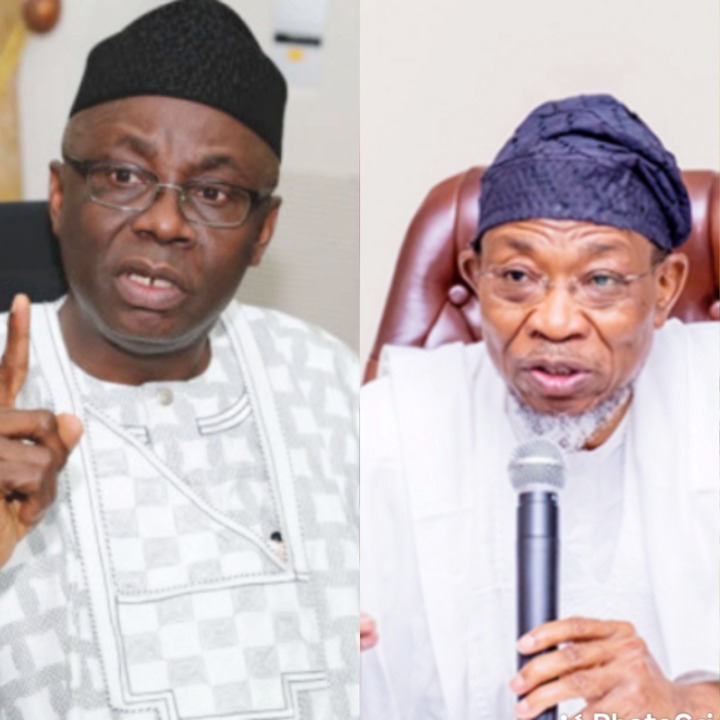 Bakare Speaks On Running For President 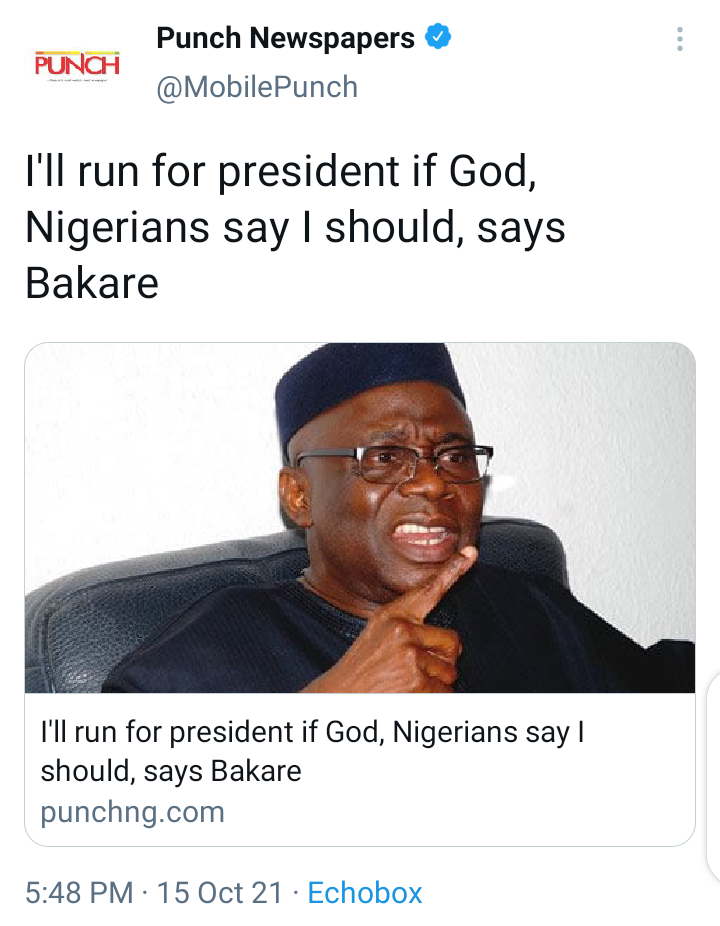 The founder of Citadel Global Community Church (formerly known as Latter Rain Assembly), Pastor Tunde Bakare, has said that it does not matter where the next President comes from as long as the President can deliver good governance.

This is as he voiced his support for the electronic transmission of votes in the 2023 elections and subsequent ones, saying it will protect eligible voters from disenfranchisement.

Bakare said this on Friday after a private meeting with the President, Major General Muhammadu Buhari (retd.), at the Presidential Villa, Abuja.

Bakare, who in 2011 was the running mate of Buhari on the platform of the Congress for Progressive Change, was scheduled for a 12-noon meeting with the President in his office.

Despite his previous close political affiliation with Buhari, the clergyman had in recent times castigated his regime.

Speaking with State House Correspondents after the meeting, he said the visit was to “dispense what was in my heart” to the President. 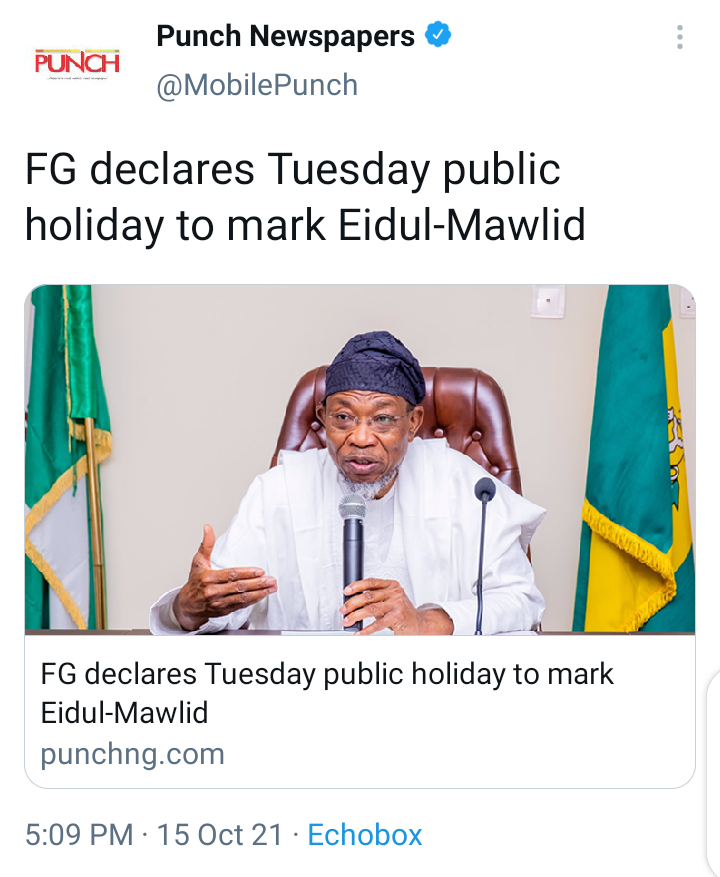 The Federal Government has declared Tuesday, October 19, 2021, a public holiday to mark this year’s Eid-ul-Mawlid celebration in commemoration of the birth of the Holy Prophet Muhammad.

Minister of Interior, Ogbeni Rauf Aregbesola, who made this declaration on behalf of the Federal Government, congratulated all Muslim faithful both at home and in the diaspora for witnessing this year’s occasion.

He enjoined all Nigerians to “imbibe the spirit of love, patience and perseverance which are the virtues of the Holy Prophet Muhammad,” adding that doing so would guarantee peace and security in the country.

This was disclosed in a statement signed by the Permanent Secretary, Ministry of Interior, Dr. Shuaib Belgore on Friday. 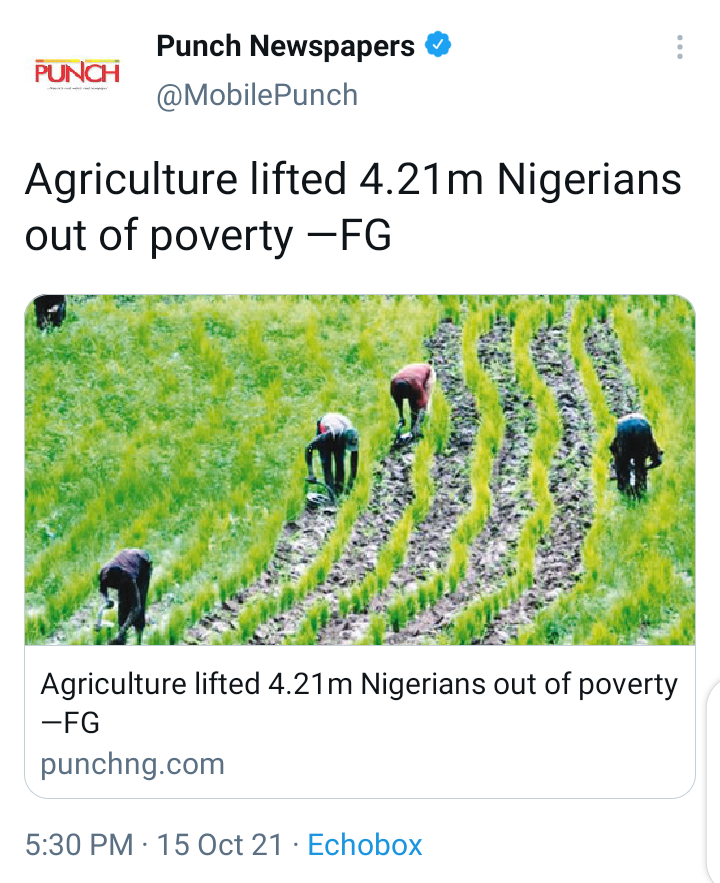 The Federal Government on Friday said about 4.21 million Nigerians were lifted out of poverty through the agricultural sector within the past two years.

Minister of Agriculture and Rural Development, Mohammad Mahmood, said this at a ministerial press briefing in celebration of the 2021 World Food Day in Abuja.

He said, “Through our various empowerment initiatives, along with production, processing and marketing of agricultural commodities, we have lifted a total of 4,205,576 Nigerians out of poverty in the last two years.

“This is going to continue as part of Mr. President’s promise to lift 100 million Nigerians out of poverty within the next 10 years.”

In the area of capacity building, Mahmood said a total of 2,205,576 farmers comprising youths and women were trained and empowered on different agricultural value chains, as the exercise was still ongoing. 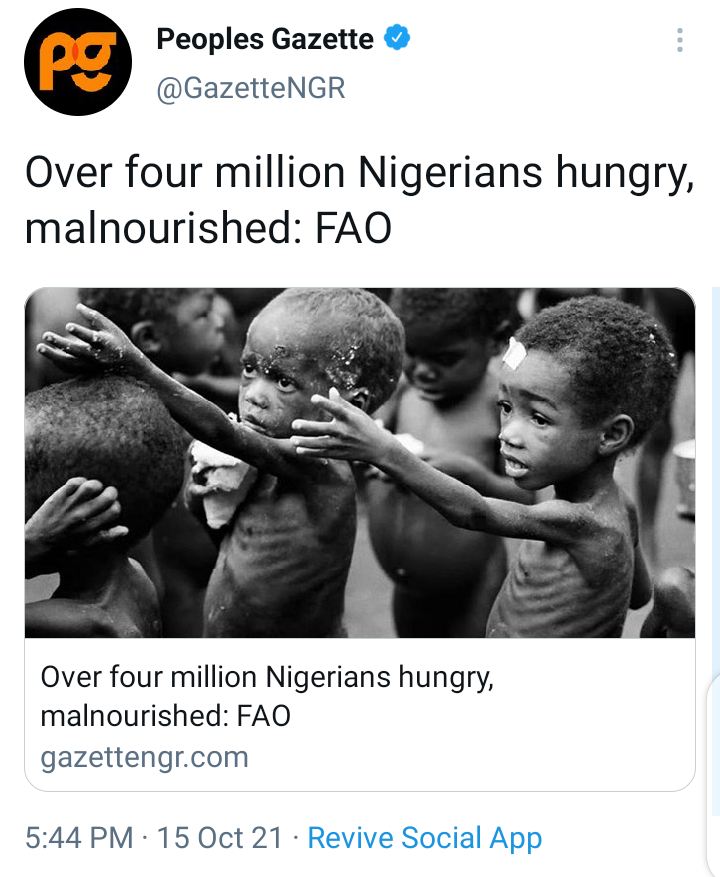 The Food and Agriculture Organization (FAO) says over four million Nigerians go hungry and suffer from malnutrition due to insecurity and environmental factors.

Conflict, pests and diseases, natural disasters, loss of biodiversity, economic challenges, habitat destruction, and devastating effects of COVID-19 are the causes according to FAO.

FAO Representative to Nigeria, Fred Kafeero, made this known at the ministerial press briefing to mark the 2021 World Food Day.