POLICE BRUTALITY: As a Threat To Democracy.

By Izicoworld (self media writer) | 2 years ago

“The police is your friend” is a common phrase boldly written on walls or voiced out by the members of the Nigerian police force when a visit is paid to the Police station. Many of the Nigerian police officers nowadays are on the ‘counter' as to the term 'Friend'. The daily correspondence and reports of the brutality portrayed by the police force have undeniably soared above limits and has made clear the actual fact that violence is the major tool used by the police to enforce the so called ‘law’ and 'order’ on the ‘bloody civilians'. The Urban dictionary defines Police brutality as the lethal and unwarranted force against a civilian. These set of persons violate and have a cavalier disregard for the rights of citizens thus it is near impossible for Nigerians to agree that policemen are their friends. The brutality of members of the police force has therefore created a chasm between the police and the local communities. The antipathetic police demeanour is a residual trait from our colonial past and the violence, cruelty and brutality perpetrated by police officers on innocent citizens is a threat to Nigeria's Democracy. 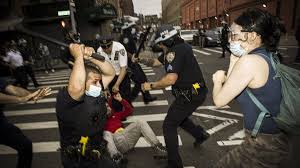 During the period of colonialism, the colonial masters had established local, decentralized police forces; which amounted to the creation and installation of the police in Lagos in 1861.The northern and southern protectorates were policed by constabularies. The function of the police in the colonial period was to violently suppress and subdue any body that was in opposition to the goals or success of the colonial masters. Police activities at this time helped to advance and strengthen colonial hegemony in Nigeria. The colonial police installed by the British in Nigeria often engaged in brutal repression and subordination of untoward native clans and communities through unconscionable use of force. Notwithstanding, the police force system created by the colonialists would have been a good establishment to maintain social stability in this civilized age if successive Nigerian governments had made enough effort to restructure and rebranded the institution for keeping societal laws and order and human protection. Having attained independence and political liberty, the country held on to the colonial policing system to protect and preserve the interest of ruling class. The police force served as a tool in the hands of successive Nigerian governments to silence and victimize political opponents as well as maintain citizens compliance to their dictates willingly or not.

Decades after independence this has horrendously continued as the ruling parties used the police to violently squelch and subdue their political rivals and anti-government protesters without regard to the tenets of a true democratic society which offers civil liberty to citizens. This practice has continued till date and for a country currently independent of colonialism, this shameful behaviour is a threat as well as inimical to our democracy. Democracy is government of the people, by the people and for the people. This basic definition was given by former US president Abraham Lincoln (1809-1865). "Government by the people" as quoted in the simple definition of democracy above, is as it were, supposed to confer the right of selecting government officials and rulers on the people being governed through a fair selection process called 'Election' and by citizens' respective choices as casted in their votes. In Nigeria however, "Government to the people" will better describe the kind of democracy practiced as the elected rulers have sharpened their use of the military personnel and the Nigerian police force to Unlimitedly dominate and suppress the collective power of the masses and true democrats. It will suffice to say that the modulation from the military regime to the democratic regime wasn’t in totality as some levels of freedom are still borne by officers with which they brutalize and violently attack civilians. Human rights, equality and freedom of expression are the cornerstone of a well founded democratic system.  Nigeria as a democratic nation still grapples with the hitherto problematic experience of human rights violation being perpetrated especially by the Nigerian police. Myers (1996) stated that although democracy is not about utopia it is about the hope of women and men to live freely as individuals in a society that holds the promise of liberty and justice for all, and about commonly held values of equality and freedom. Because of frequent violations of human rights by  Nigerian police, even during elections the confidence of the public in police has been gravely damaged. Political aspirants and elected authorities have seized control of the police force and employ them to intimidate, maim and subdue the citizens and their rights in the electioneering process. There are countless number of reports of election thuggery and ballot box snatching that have been perpetrated by police officers. The ignominious acts carried out by the police and other security agencies in Ekiti and Rivers States during the governorship elections in 2014 and 2015 respectively cannot be set aside so soon. The activities of the police officers spell doom to growing democracy.

Policing in Nigeria does not meet up with modern best practices. The incessant misdemeanour in the execution by the police, of the constitutional recommendation on due process and fundamental human rights of individuals as clearly stated in Chapter 4 of the 1999 constitution of the federal republic of Nigeria shows that the Nigerian police are privy to the fundamental human rights’ provisions under chapter 4 of the 1999 constitution, as amended. They are not unaware of the part 2, Police Act which fixed their primary duties as “maintenance of law and order, prevention and detection of crime and the protection of life and properties.” They understand that the misapplication of firearms against people “except in self – defence or defence of others against threat of death or severe injury or to prevent the escape of a person who has committed a serious or deadly crime while resisting their authority” is unprofessional and atrocious. The inability and seemingly unwillingness of the police to align with democratic values and constitutional provisions in the arresting of crime suspects and handling of people as exemplified in the extrajudicial killing of suspects, desultory arrest and detention, torture and other brutal, inhumane, or degrading treatment of civilians is not in the slightest way a small threat to our country’s unstable democracy. The brutality of the police officers whether or not it is a legacy of the colonial era, its sustenance hitherto is pernicious and dangerous as its continuity could erupt into a social unrest so large a scale as to eventuate a total democratic breakdown and incite military overtake.

Unfortunately, the 21st century Nigerian police officers are busy with bribery, violence on protesters exercising their rights, illegal use of riffles to gun down innocent citizens, use of torture on prison inmates, etc. More recently is the multiple killing of civilians by police officers reported during the lockdown order against the Corona virus pandemic that hit Nigeria. The Nigeria Police Force has a long record of unleashing violence on harmless citizens. The recent rampant indiscriminate and extrajudicial killing, brutalization and extortion of harmless Nigerians by the law enforcement agency are footprints of the long – standing peremptory and autocratic political framework, social inequality and economic exploitation which are constitute the modus operandi in Nigerian political system. Police brutality is therefore inseparable from Nigerian social – political and economic framework as it is the menace which has characterized the law enforcement practices (by the police) in Nigeria. Today, police see the use of lethal force, violence and brutality as main feature of their profession. Hence the police in Nigeria have inverted their responsibility to protect the public, and are now tagged for brutality, corruption and exploitation, to say the least. No number of present laws, bills and public reforms can effectively curb police brutality in Nigeria if its not in strong support for proper democratization of the Nigerian political sphere and the economy to enhance the promotion of true democracy, social justice and human

Photo credit: All photos were gotten from Google images

Content created and supplied by: Izicoworld (via Opera News )