By FutureBest (self media writer) | 6 days ago 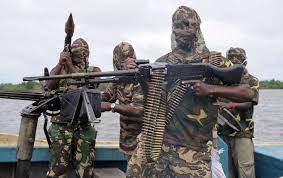 Suspected secessionists operating under the banner of the Biafra Nations League (BnL) on the Bakassi peninsular and parts of Cross River assaulted the Iyang jetty in the state's Bakassi Local Government Area yesterday, killing one policeman and injured others. Details of the attack were unavailable, and BnL leader Princewill Richards declined to comment on the incident, but top BnL sources indicated the attack was carried out to protest the government's continued arrest of Nnamdi Kanu and other Biafrans.

According to Irene Ugbo, the Police Public Relations Officer (PPRO), who confirmed the occurrence, there was an attack on the maritime police at Ikang (Bakassi), an unfortunate incident in which one police officer was killed and two others were injured. "We also reacted," he continued, "and I believe we hurt some of them." The inquiry into the gang is currently underway, and I am confident that they are militants. We're on the hunt for them, and we'll catch them shortly."

In a similar event, the BnL has threatened to halt oil exports from the Gulf of Guinea in order to press their demands. The refusal of the government to resettle the displaced Bakassi people was also labeled by the BnL as the highest evil, which must be stopped or more bloodshed will be recorded in the region.

According to a statement signed by BnL's National Leader, Princewill Richards, Deputy Leader, Ebuta Takon, and Chairman of the Standing Committee of Senior Officers of BnL, Godstime Ntukidem, and made available to The Guardian in Calabar, BnL is attempting to halt the flow of oil in the Gulf of Guinea because it is the only way to get the world to speak out for Biafra, and President Muhammadu Buhari is insisting on. "We are making measures to slow down oil operations in the Gulf of Guinea," BnL stated, "via targeted vessels that we have blacklisted, closing down oil firms, and very soon, after we accomplish our targets, we will disconnect the pipelines."

They praised their supporters at the border, particularly the recently arrested members in Ikom, Cross River State, and their followers in Bakassi, who have been able to clean the waterways of foreign vessels, insisting that international business at sea will be hampered, but they must release their members arrested in Ikom or there will be no peace. The refusal of the government to resettle the displaced Bakassi people, according to BnL, is the height of depravity, with the Nigerian government profiting off the people's suffering for political gain. They voiced concern about further military operations by Cameroonian forces against remains of the ceded Bakassi Peninsula, saying that such activities could lead to additional violence in the region, particularly the bombing of more military equipment by militants.

The statement recalled that a militant group, Black Marine, which claims to be the armed wing of BnL, claimed responsibility for the bombing of two military gunboats in the Abana waterside community in the Peninsula a week ago, forcing authorities to ask workers to leave the quarters for safety reasons.