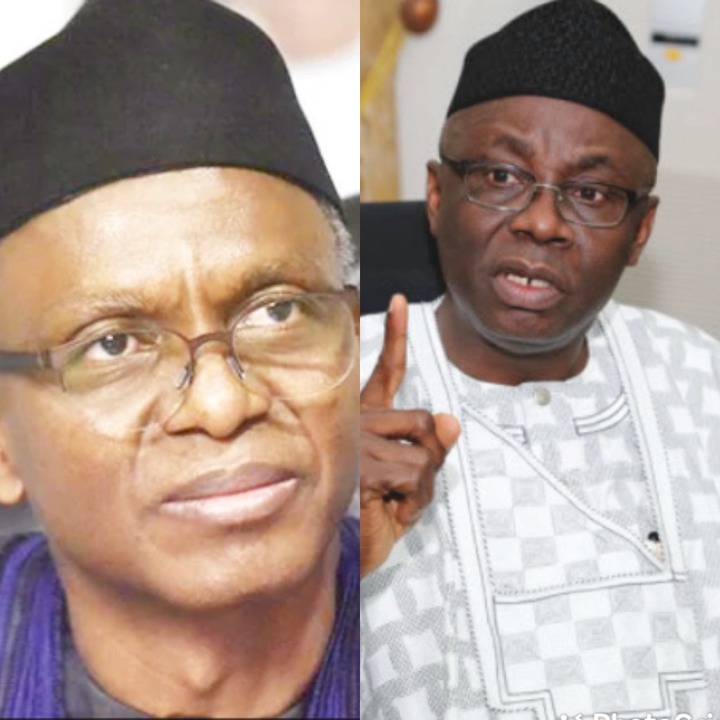 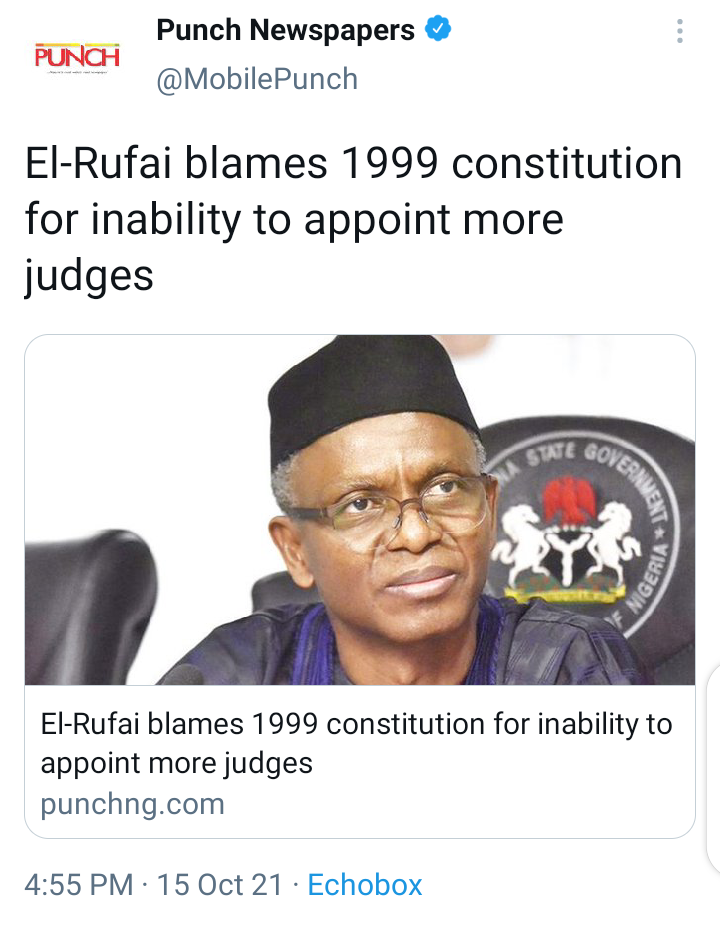 The Governor of Kaduna State, Nasir El-Rufai, has blamed the 1999 Constitution for the state’s inability to appoint more High Court judges.

The Governor, who expressed hope that the ongoing constitutional review process will address the situation, said those who drafted the constitution foisted a unitary judiciary on a federation.

He said this at the swearing-in of new High Court judges, commissioners, members of statutory commissions, and chief executives of Kaduna State Government agencies, held at the Council Chambers of Sir Kashim Ibrahim House on Friday.

“I congratulate the new High Court judges on their appointment. Left to us, we should be swearing in many more persons as judges today,” El-Rufai said.

“The credibility and effectiveness of the law and order strategy depend on the speedy dispensation of justice.

“Speedy justice cannot be dispensed by overworked judges. We want to lighten the burden of our judges but our ability to appoint more of them is constrained because the National Judicial Council has to recommend to us to appoint.

“This is an anomaly introduced by the drafters of the 1999 Constitution who effectively foisted a unitary judiciary on a federation. 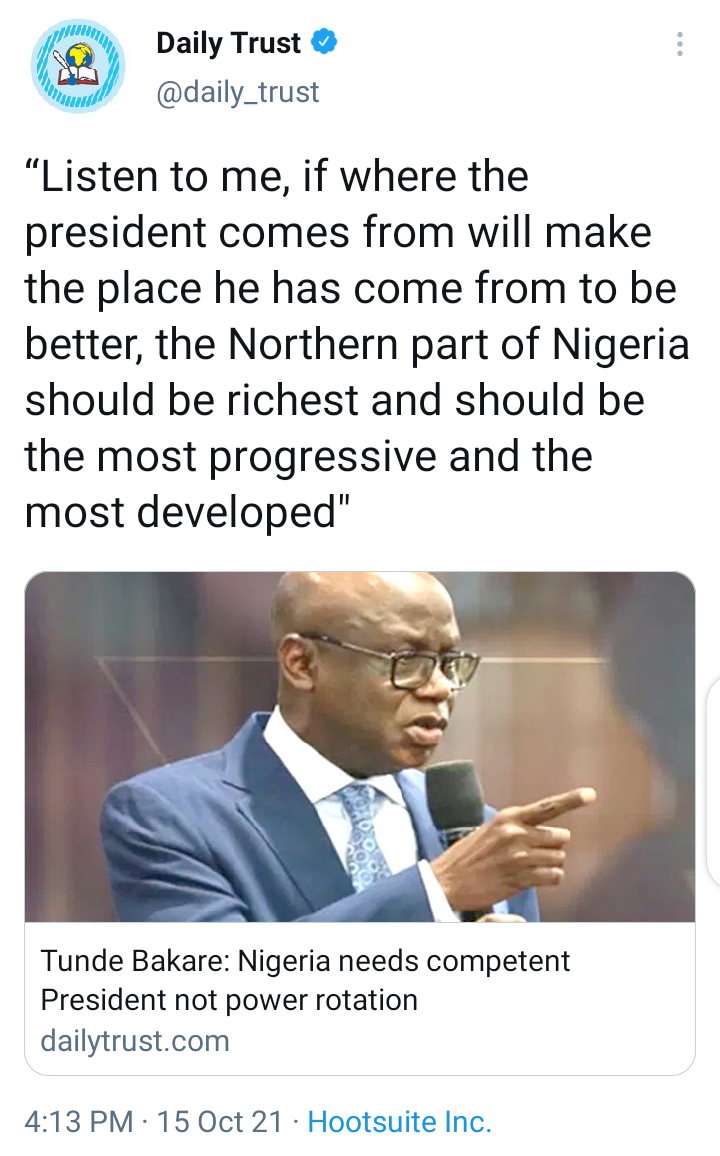 The serving overseer of the Citadel Global Community Church (CGCC) (formerly Latter Rain Assembly), Pastor Tunde Bakare, has said that what Nigeria needs at present is a President who is most competent to drive the country to the Eldorado and not agitation for power rotation.

He said this on Friday while fielding questions from State House reporters after a private visit to President Muhammadu Buhari at the Presidential Villa, Abuja.

Bakare, who said he dispensed what’s in his heart to the President, said it was political “immaturity” that drove the nation to the clamour for power shift when various zones that produced Nigerian leaders in the past had not fared better after many years of independence.

Asked about his position on the ongoing debate on power rotation, he said: “I’d said it on the 3rd of October. It’s our immaturity, politically and otherwise, that makes us say power must either be in the North or be in the South, instead of looking for the best, the fittest, the most competent, and people of character who love this nation. 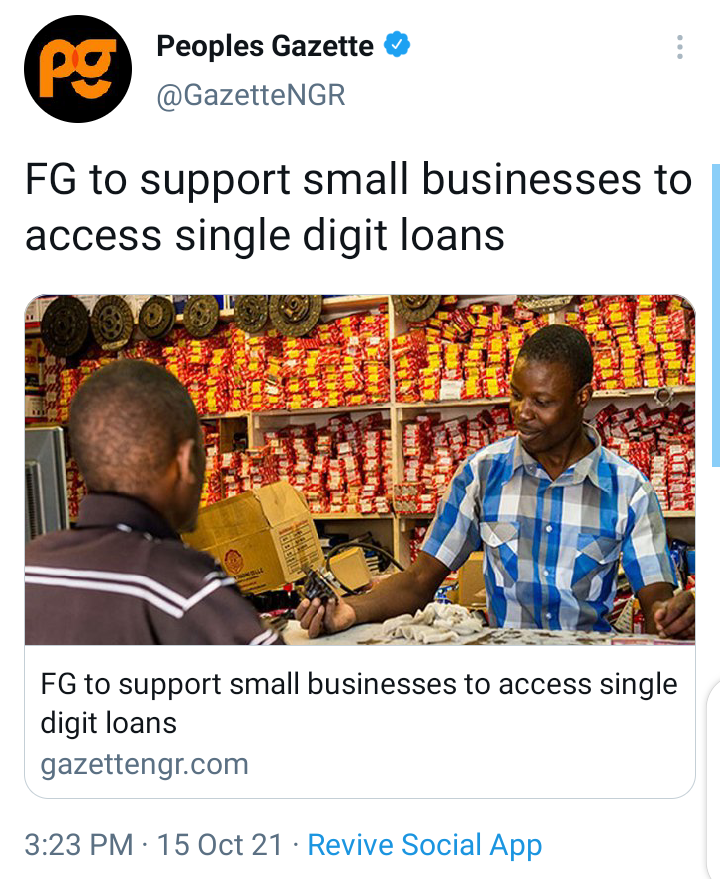 The federal government says it will support small businesses to access credit facilities at a single digit rate to scale up their operations and boost the economy.

The Ministry of Industry, Trade and Investment, stated this during a visit of the Nigerian Association of Small and Medium Enterprises (NASME) on Friday in Abuja.

“Mr President specifically said that every support will be given to ensure that MSMEs have access to credits,” said the Minister of State in the ministry, Maryam Katagum.

“That is what we always preach and we will give every support to the MSMEs as the engine of economic growth to have access to credits at single digits,” Mrs Katagum said.