By natSpeaks (self media writer) | 9 months ago

Graça Machel (born 17 October 1945) is a Mozambican politician and humanitarian. She is also an international advocate for women's and children's right.

3. She attended Methodist Mission schools before gaining a scholarship to the University of Lisbon in Portugal.

4. She studied German in University.

6. Graça returned to Portuguese East African 1973, she join the Mozambique Liberation Front (FRELIMO) and she worked as a school teacher.

7. She was Mozambique first Minister of Education and Culture, shortly after Mozambique gained her independence in 1975. (She was appointed on 25 June 1975). 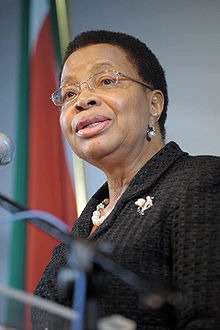 8. During her tenure as the Minister of Education and Culture, the number of students enrolled in primary and secondary schools rose from about 40% of all school-aged children to over 90% for males and 75% for females.

9. She married Samora Machel, the first President of Mozambique in 1975.

11. Samora Machel (first husband of Graça) died in office in 1986 when his Presidential aircraft crashed near the Mozambique-South African border.

13. She lost her second husband Nelson Mandela in 2013 to pneumonia.

14. She receives lot of awards.