Every country has its fair share of heroes- men and women of character who are ready to stand for the truth; to fight for justice and possibly lay down their lives for a better future for their people. Men and women whose peek into the future would not allow for them to compromise the present. Common men whose deeds are extraordinarily selfless.

Contrary to what most Nigerians were taught in history classes, these heroes never lived in Aso rock nor were they pampered in Dodan barracks nor any state house for that matter. These men dwelt amongst their people and could therefore stand as one with them.

Since the history of Nigeria no group has embodied these qualities than the Ogoni nine whose blood sacrifice still speaks for their land after over 20years since their execution at the behest of Nigeria’s Sani Abacha. Till date Ogoniland remains the only place in South-South Nigeria where oil is not being drilled despite the oil deposit in the area because of the bill of rights of the Ogoni people facilitated by the Ogoni9.

However, various renditions of the heroics of the 9 Ogoni men have centered on their leader, Ken Saro Wiwa while the others who paid the same ultimate price for their people have been relegated into oblivion. An attempt to trace the names and lives of the other eight Ogoni men returned with nothing but their connections to Ken Saro Wiwa, not even personally captioned pictures of them but this from one newspaper publication from 1995 and their court hearings in the same year when they were executed. 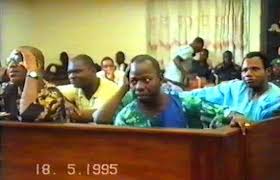 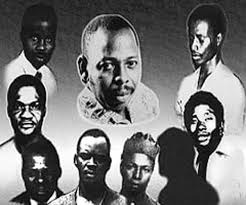 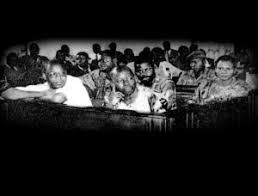 The government of Gen Sani Abacha executed these men and hid their allegedly mutilated bodies in unmarked graves which were revealed years later after a drawn out legal and emotional battle with the powers that be. However, the media did something more terrible by not preserving records of the 8 "unknown" men whose sacrifice for their people rivals any in the world of sacrifices. These are their names: 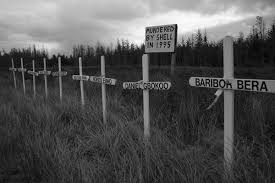