By ALLNEWS (self media writer) | 2 years ago 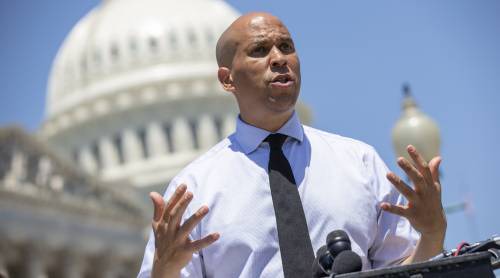 Cory Booker , United States senator, has joined voices with Senator Bob Menendez, a ranking member of the US Senate's Foreign Relations Committee, in condemning the rearrest of Omoyele Sowore in court.

Menendez stated on Friday that the brutal manner in which Sowore was arrested was a blatant miscarriage of justice and promised to have his country intervene on the matter.

Cory Booker, who also reacted on Friday, described the situation as dangerous and promised to assent to any move that will uphold the rule of law in the country.

Booker said, "It’s appalling that NJ journalist, Omoyele Sowore, was rearrested in Nigeria hours after his release. "This is a shocking affront to the country’s rule of law and Nigeria must cease its dangerous attacks on freedom of expression."

Earlier on Friday, Activist and journalist Omoyele Sowore was dramatically re-arrested Friday just hours after being freed on bail, in a case that has raised questions over free speech in the country.

Omoyele Sowore, who is the publisher of US-based Sahara Reporters newsite and ran for president in February's general elections, was detained after calling for a nationwide demonstration against President Muhammadu Buhari. He was charged with treason, money laundering and cyberstalking the President, but denies all charges.

Sowore is being held by Nigeria's intelligence agency, the Department of State Security (DSS), since his arrest on August 3 -- despite two court orders granting him bail.

The journalist was released briefly on Thursday after a federal court gave the intelligence agency a 24-hour ultimatum to release Sowore pending his trial.

However, DSS officials, wielding guns, stormed a federal high court in the capital Abuja on Friday where the journalist is on trial for treason and attempted to "forcefully arrest" him, his wife Ope Sowore and other witnesses told CNN.

The judge and court staffers fled the courtroom in the chaos that ensued, Ope Sowore said.

"Armed DSS operatives strangled and forcefully harmed my husband in an attempt to rearrest him. The judge fled the courtroom for her own safety. And with brutal force, the DSS operatives were successful in taking my husband again," she told Newsmen.

AllNews has reached out to DSS spokesman for comment and has yet to receive a response.

Content created and supplied by: ALLNEWS (via Opera News )