By OmoobaAlekuwodo (self media writer) | 1 year ago

In preparation for the 2022 Governorship Election in Osun State, former Senator representing Osun West Senatorial District, Senator Ademola Adeleke, has commenced political activities that may assist his aspiration to become the next Governor of the State. 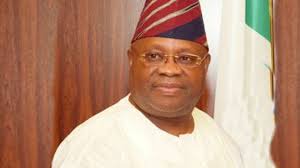 It could be recalled that Senator Ademola Adeleke emerged as the Governorship candidate of the opposition Peoples Democratic Party (PDP) in 2018 Governorship election in Osun State and he, commendably, lost the main poll to the candidate of All Progressives Congress (APC), Alhaji Isiaka Adegboyega Oyetola on narrow margin.

Although, the coast is actually not yet clear for the former Senator of Osun West Senatorial District, Senator Ademola Adeleke, to boast as the appraised governorship candidate of the opposition Peoples Democratic Party (PDP) who may, probably, be competing with the incumbent Governor of the State, Alhaji Isiaka Adegboyega Oyetola and many others for the position of Number One Citizen of Osun State, come 2022. However, Senator Ademola Adeleke seem to have access to about two critical chances that may help his ambition to become the governorship candidate of the opposition party, Peoples Democratic Party (PDP).

First, the political goodwill of the former Governor of Osun State and former Senator representing Osun West Senatorial District in the National Assembly, Senator (Late) Isiaka Adetunji Adeleke, may quietly work for Senator Ademola Adeleke, to be considered by the Peoples Democratic Party in order to give the ruling party, All Progressives Congress (APC), a good run in the next governorship election in the state.

Undoubtedly, Late Isiaka Adetunji Adeleke has a commenadble political goodwill among his people of Osun West Senatorial District. His philanthropic charisma may equally translate to a political opportunity for his blood brother, Senator Ademola Adeleke, who has declared his intention to vie for the position of the Executive Governor of Osun State under the platform of Peoples Democratic Party (PDP), in 2022. Sincerely, it is rare for any of the other governorship aspirants under PDP to withstand the political goodwill that Senator Ademola Adeleke may inherit from his late brother, Senator Isiaka Adeleke.

Secondly, the financial capability of Senator Ademola Adeleke may, as well, be considered as another chance that may assist him to be considered to give the ruling party, All Progressives Congress (APC), a good run in the 2022 Governorship election in the state.

Encouragingly, Senator Ademola Adeleke is emerging from a family which solid financial background. The financial burden that is attributable to the governorship elections in Nigeria could not be underrated, in the course of determining the political viability of a candidate to give a good result if he is nominated by a political party.

However, with the supports of his brothers, sisters, cousins and children who are strikingly rich, the financial capability of Senator Ademola Adeleke to give ruling party, All Progressives Congress (APC), a good run may, actually, not be forsaken.