By OmoobaAlekuwodo (self media writer) | 29 days ago 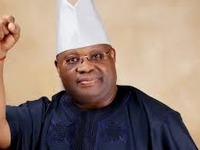 The preparation for the 2022 governorship election in Osun State is becoming more interesting as more candidates are joining the governorship contest to the Abere Government House of Osun State.

Although, other political parties may take part in the election, the contest into the Office of the Governor of Osun State in 2022 is, probably, being expected to be another keenly contested election between the ruling party, All Progressives Congress (APC) and the opposition Peoples Democratic Party (PDP).

The ruling All Progressives Congress (APC) will, undoubtedly, present incumbent Governor Isiaka Adegboyega Oyetola while the opposition Peoples Democratic Party (PDP) may still be, aggressively, sourcing for a formidable and viable governorship candidate that can, at least, gives the party a height of hope that may enable the party to, for once again, have a glance at the inner looks of the Office of the Governor of Osun State.

Interestingly, some members of the opposition Peoples Democratic Party (PDP) have shown interests to face Governor Isiaka Adegboyega Oyetola at the ballot jungles, where the electorates will diligently decide who will be the number one citizen of the state for another administrative four years.

However, Senator Ademola Adeleke may not be considered as a favorite candidate of the opposition party, Peoples Democratic Party (PDP), if the party really want to give a hot contest in the 2022 Governorship election in Osun State.

Considerably, the burden of court cases that the candidature of Senator Ademola Adeleke may bring to the opposition Peoples Democratic Party (PDP) may be another, major, point that may wreck the political sagacity of the party's gladiators.

It is important to remember that the political rift between the political camps of Senator Ademola Adeleke and Hon. Soji Adagunodo has degenerated into the level that the state chapter of the opposition party is factionalised.

Considerably, the opposition Peoples Democratic Party (PDP) may decide to present a fresh governorship candidate who will unite the members of the opposition party and will not lead the party into another era of judicial battles.