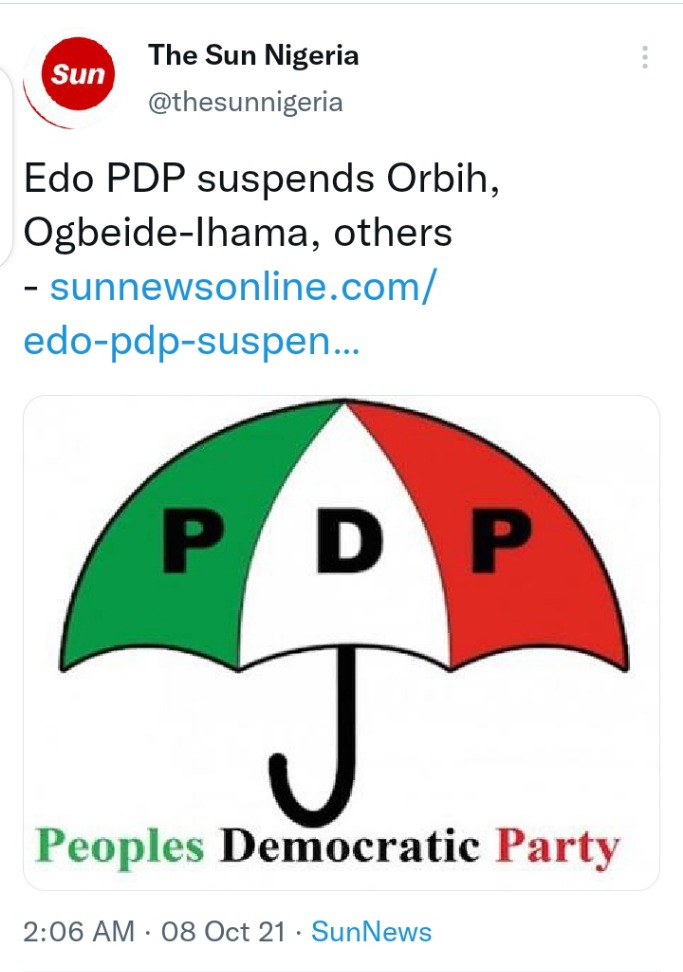 The suspension of Chief Orbih and others in Edo North is contained in a communique read by Mr. Charles Erikhumhi following a meeting of the zone's PDP leadership in Auchi, Etsako West Local Government Area.

Erikhumhi accused those who had been suspended of violating the party's constitution, as well as alleged embezzlement and anti-party activities. 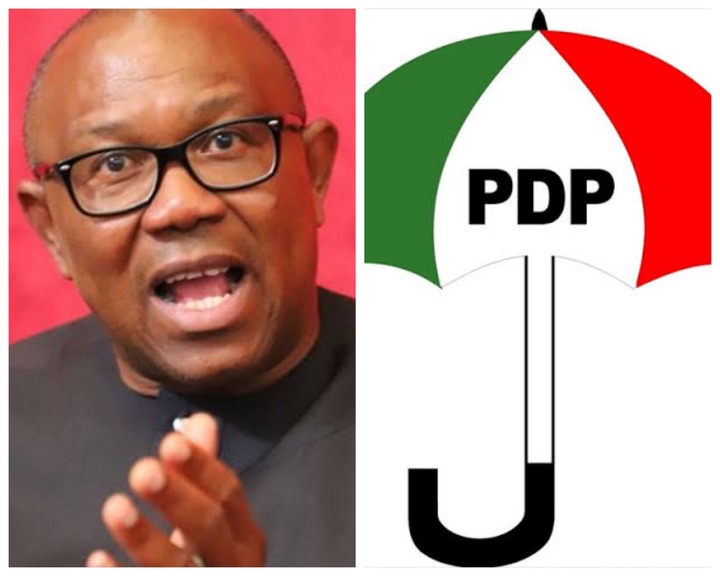 Mr. Peter Obi, former Governor of Anambra State and Peoples Democratic Party, PDP's Vice Presidential Candidate in the 2019 election, has responded to a media report that he violated Nigerian laws by engaging in secret businesses set up in tax havens, declaring that he broke no law. 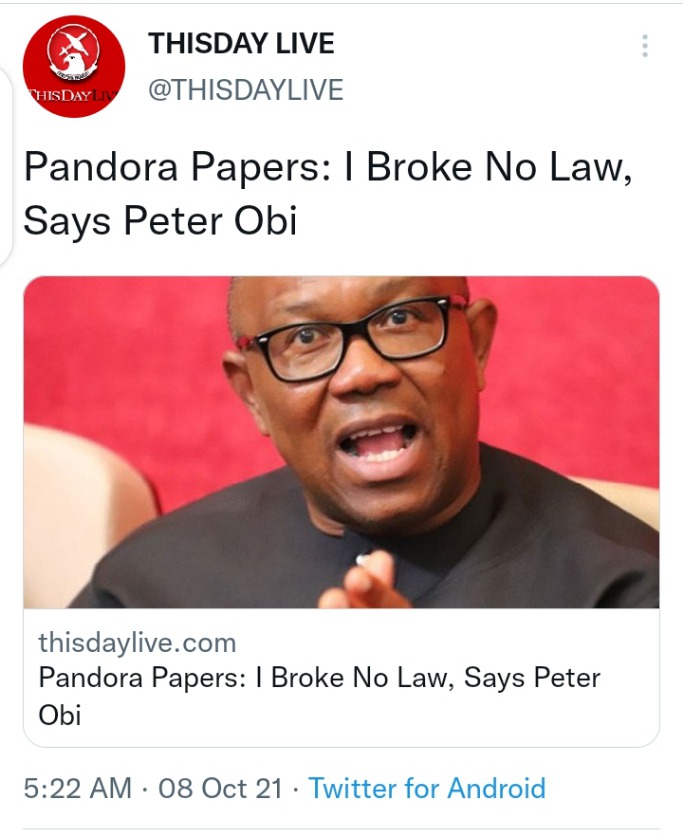 An online publication, Premium Times, quoting Pandora Papers, had listed Mr. Obi as one of those personalities who clandestinely set up and operated businesses overseas, including in notorious tax and secrecy havens in ways that breached Nigerian laws.

The Pandora Papers is a leak of about 12 million documents that revealed hidden wealth and tax avoidance by some of the world’s rich and powerful.

But reacting to this yesterday, Obi said it was exhilarating that nowhere in the article was he accused of any form of corruption, whether in the form of diversion of public funds or in any other manner during and after his stewardship as the governor of Anambra State.

He also stated that the publication did not allege that he had ever engaged in illegal business ventures.

Obi stated that his understanding was that the allegation was more on tax avoidance and non-declaration of some jointly owned assets.

He then wondered if a thorough scrutiny and appreciation of all the facts and circumstances surrounding the alleged transactions were made by the writers.

The Inspector General of Police, Mr Usman Baba, on Thursday assured that there was no plan to reinstate the disbanded Special Anti Robbery Squad (SARS) into the Nigeria Police Force. 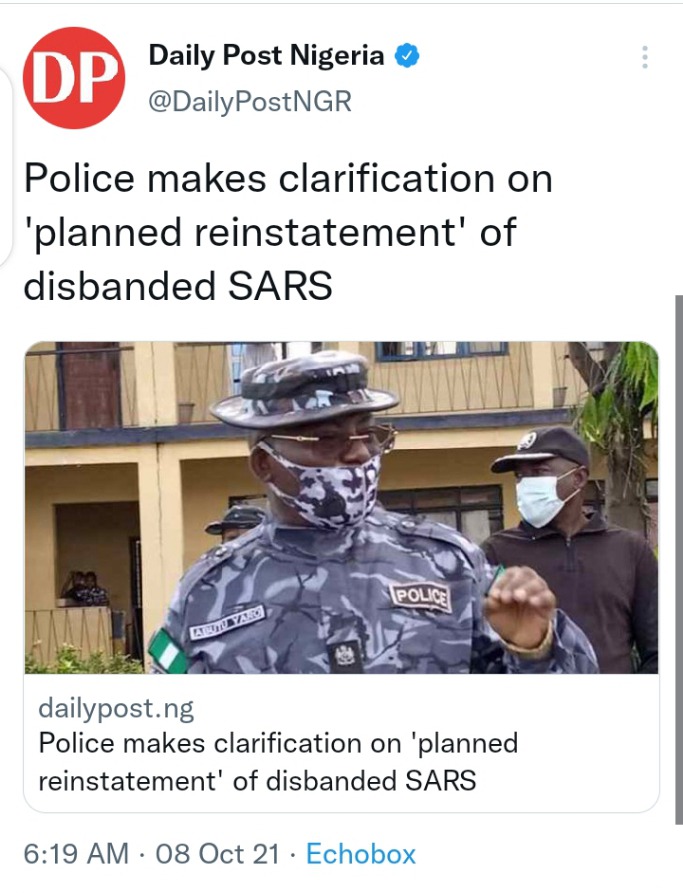 Mr Frank Mba, the Force Public Relations Officer (FPRO), made the announcement in an Abuja statement.

Mba explained that the clarification came in response to reports circulating both online and offline that the IGP had ordered the reinstatement of the disbanded SARS.

He said, “The Force wishes to emphasise that there is no plan whatsoever to bring back the disbanded SARS. SARS is gone for good and will not resurrect under any guise whatsoever.”

President Muhammadu yesterday presented the 2022 budget of N16.39 trillion to a joint session of the National Assembly, justifying his quest for more financial borrowings. 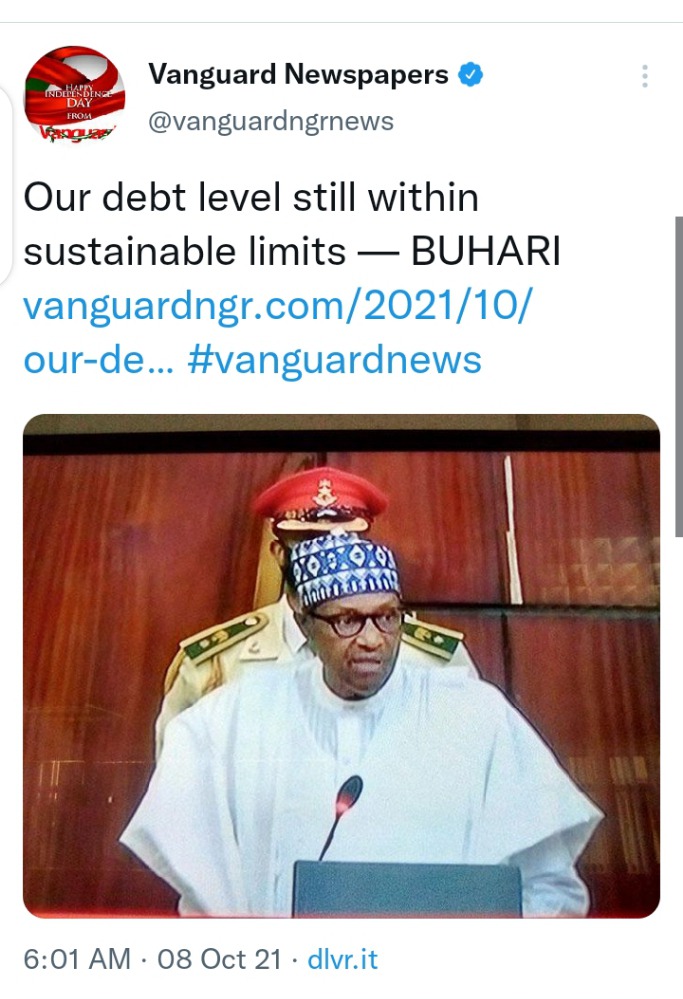 The President, who also noted that the federal government’s debt was within sustainable limits, said nation’s the borrowings were tied to specific strategic projects.

Recall that the federal government had come under hard criticisms over its decision to more borrowings.

The President, however, noted the concerns raised by Nigerians, saying projects for which the funds were secured could be publicly verified. He added that the deficit arising from the N16.39 trillion 2022 budget would be financed by new borrowings.

Buhari also said that the two economic recessions witnessed by his administration necessitated the debt.