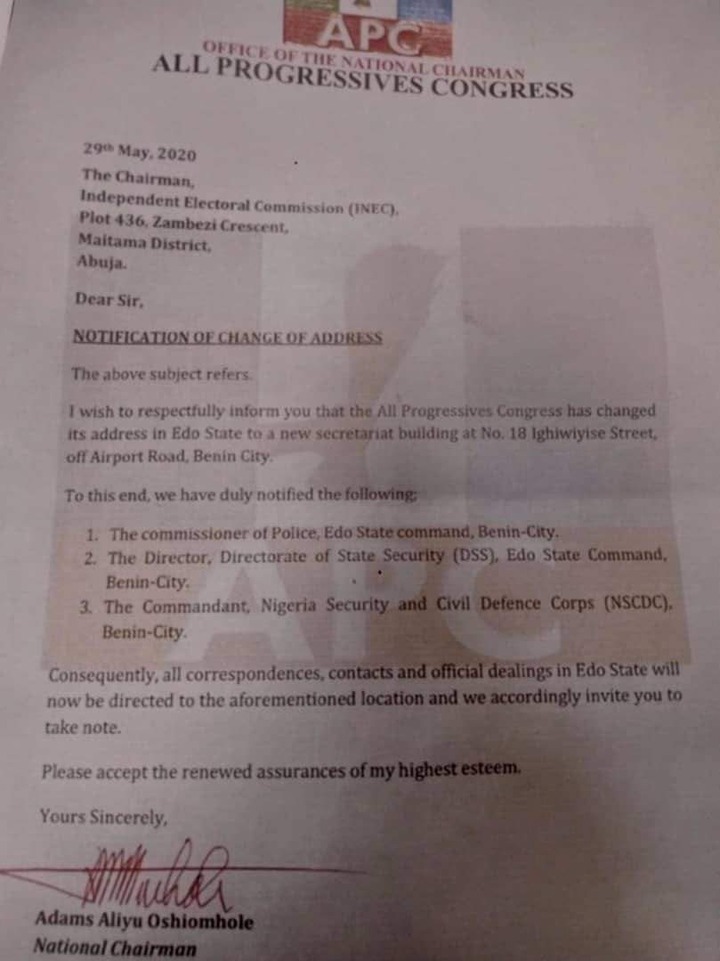 The show is gradually getting to an end for Obaseki in APC as the National Chairman of the APC, Comrade Adams Oshiomhole has informed the Independent National Electoral Commission, INEC of a change of address of its Edo state secretariat.

In a letter he signed on the 29th of May 2020, and sent to the INEC, the National chairman said, the new address of the state secretariat of the party authority is 16 Igwiwiyise street, Off Airport Road, Benin City.

The letter also informed the Edo state Police Commissioner, the director of State Services and State Commandant of the Nigerian Security and Civil Defense Corps of the new Secretariat.

The battle of wits between Adams Oshiomhole and Godwin Obaseki is sure getting set to be over as long as the APC ticket is concerned.

Obaseki who has refused to seek Oshiomhole's forgiveness has vowed to disrupt any primaries conducted in the State.

Even the courts Obaseki once relied upon for backup plans in the past is not favourably disposed towards his own personal desires in stopping the APC from holding its primaries.

This recognition of the Col Imuse led leadership of APC in the state is currently causing ripples in the camp of the Obaseki Shaibu Movement as supporters are already thinking of ways to throw in their support for the leading gubernatorial aspirant in APC, Pastor Osagie Ize-Iyamu.

The political camp of POI keeps receiving decampees from the opposition camps on a daily basis.

It seems all over for Obaseki as the Presidency, Party appracthiclk and the masses have all deserted him.