4 Great qualities of the Late Nelson Mandela that we ought to emulate.

By ObiGodwithus (self media writer) | 1 year ago About Nelson Mandela: Nelson Rolihlahla, was born on July 1918 and he died on 5th December 2013. He was a South African Anti-apartheid Revolutionary leader and philanthropist who served as president of South Africa from 1994 to 1999. He was South Africa's first black head of state and the first elected in a fully representative democratic election.

His government focused on dismantling the legacy of apartheid by tackling institutionalized racism and fostering racial reconciliation. He served as the President of the African National Congress (ANC) party from 1991 to 1997. Nelson Mandela was also the 19th secretary general of the Non-aligned movement from 2nd September 1998 to 16th June 1999.

Nelson Mandela was born in Mvezo, Cape province, union of South Africa to Mr Gadla Henry Mphakanyiswa and Mrs Nosekeni Fanny. Nelson Mandela was first married to Evelyn Ntoko Mase in 1944 and they got divorced in 1958. He later married Winnie Madikizela in 1958 but was also divorced again in 1996, finally he married Graca Machel in the year 1998 and lived with her up to the time he died in the year 2013 from a respiratory disease.

Nelson Mandela won several awards during his life time which includes the Sakharov Prize (1998), Bharat Ratna(1990), Nishan-e-Pakistan(1992), Nobel Peace prize (1990), presidential medal of freedom and lots more. He is popularly known as Madiba, one of his popularly literally work is known as THE LONG WALK TO FREEDOM. Qualities that we ought to emulate from the late Nelson Mandela. (1) Vision: Nelson Mandela was a man of vision, his vision to see a free South Africa that will exist without the shackles of colonialism and racial discrimination led him to become involved in anti-colonial and African Nationalist politics, joining the ANC in 1943 and co-founding it's youth league in 1944. Nelson Mandela and the ANC committed themselves to the overthrow the national party's white only government established arpatheid, a system of racial segregation which favoured only the whites.

Nelson Mandela's vision drove him from his normal non-violent protest to join the banned South African communist party to found the militant "umkhonto we sizwe" in 1961 and led a sabotage campaign against the government. In the pursuit of this all important vision, Nelson Mandela lost his freedom when he was arrested and imprisoned in 1962 and subsequently sentenced to life imprisonment for conspiring to overthrow the state following the Rivonia Trial.

(2) Sacrifice: Nelson Mandela had an extraordinary grace to make sacrifices, unlike most of today's African politicians, who instead of making sacrifices that will move their countries forward, but would rather loot the treasury of their countries for selfish purposes. Nelson Mandela sacrificed his time, his comfort, his image and his freedom for a cause that is noble, that is, the freedom of his people. He was repeatedly arrested for seditious activities and was unsuccessfully prosecuted in 1956 treason trial, finally he sacrificed 27 solid years of his life in prison, so that his beloved people of South Africa could be free, Nelson Mandela was actually sentenced to life imprisonment but growing domestic and international pressure, and fears of racial Civil war, made president F.W. de Klerk to release Nelson Mandela in the year 1990. (3) Perseverance: Nelson Mandela was able to persevere through shackles of racism, which started greatly from when he was studying Law at University of Watersrand, where he was the only black African student and faced racism. Mandela persevered through the rough roads of arrests, abuse and imprisonment etc, this is is one great quality of Madiba that we ought to emulate. 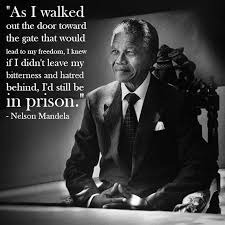 Nelson Mandela forgave the worst of his enemies and previous tormentors to the amazement of the world, he called for Nationwide reconciliation, these great quality of the Late Nelson Mandela earned his admiration all over the world, Nelson Mandela's statue was erected in England and he became a role model to many Individuals around the world.

Content created and supplied by: ObiGodwithus (via Opera News )