After a lot of meandering and politicking, Governor Rotimi Akeredolu has been declared the winner of the All Progessives Congress (APC) governorship primary in Ondo state in the early hour of Tuesday.

Akeredolu who was agitated before the poll and reportedly to have underhanded the process through his counterpart in Kogi State, Yahaya Bello who presided over the election committee in Ondo state. The primary election, which took place at Ondo state International Cultural and Events Centre started exactly 2pm on Monday and ended 1am thereabouts on Tuesday.

It was reported that Ife Oyedele who was the main opponent bowed out of the contest on Sunday, due to pressure from the party's national leaders and President Buhari's intervention.

Two other co-aspirants; Jimi Odimayo and Olusegun Abraham followed suit and dropped their interest barely 24 hours to the primary and also threw their supports behind Akeredolu, having seen Oyedele set the pace.

This development refuted the rumour that Akeredolu must have placated the three of them with millions of naira, though some have argued that Akeredolu may have promised them political appointments when he finally emerges the winner of the state's Gubernatorial election and return to office as Governor for a second term. 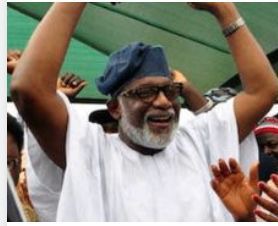 Akeredolu who polled the highest number of votes in all the 18 local government areas of the state with 2,458 votes and defeated eight other aspirants who participated alongside with him in the primary with a wide margin.

Olusola Oke came second with 262 votes was not anything near Akeredolu's number of votes.

Akeredolu who was elated, in his acceptance speech said the victory was handed to him on his birthday July 21. He urged his co-aspirants who lost in the primary and those who stepped down for him to give him full support in pressing further to ensure that APC wins in the October 10 Gubernatorial Election in the state.

It was reported that the primary election was violence-free and was witnessed by heavy presence of security agencies.