FLASHBACK: "I don't care if Obaseki betrays me", 12 things Oshiomhole said about Obaseki in 2016 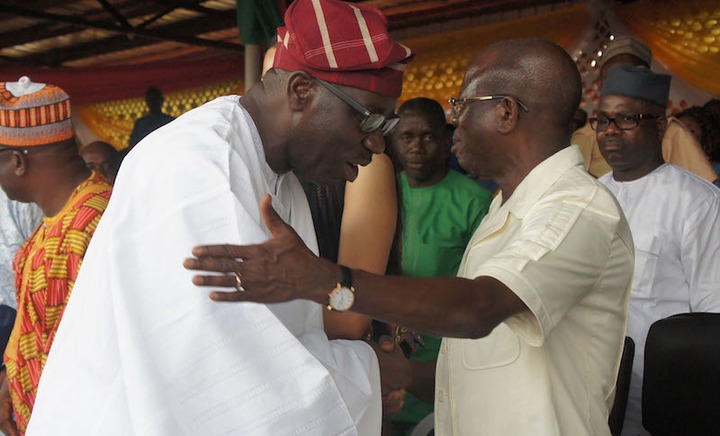 In 2016, Comrade Adams Oshiomhole laboured vigorously to ensure that he handed power over his successor Godwin Obaseki as the Governor of Edo State. He campaigned against Pastor Ize-Iyamu of the then PDP who today is the consensus candidate of the APC. He threw tantrums at the then PDP candidate calling him all manner of names. Governor Obaseki was then his beautiful bride, but today the table has changed for the three.

Due to series of irreconcilable differences between both of them, Comrade Adams Oshiomhole has sided with Pastor Ize-Iyamu who is now in the APC, while Governor Godwin Obaseki has decamped to the PDP with his deputy governor to seek re-election for a second term. You might be wondering how did things fall apart, despite very strong remarks made by Oshiomhole concerning Obaseki in 2016?

Below are 12 remarks made by Oshiomhole in support of Governor Godwin Obaseki in 2016:

1. Godwin Obaseki comes from a large family in Benin Kingdom. He went to the University of Ibadan after finishing his secondary school education and he graduated with flying colours.

2. Godwin Obaseki went to the United States of America to do his Masters. He came back to Nigeria to start helping people start and manage their businesses, he even helped to set up second generation banks.

3. Oshiomhole said " I don't care if Godwin Obaseki betrays me at at the end of the day, Obaseki's allegiance should be to the entire people of Edo State and not me."

4. The oath of the office Obaseki is going to subscribe to, says he will defend the constitution of Nigeria. He said he will do everything possible to uplift the standard and quality of life of the people of Edo State. He went further to say that nothing in his oath of office will include " I will not betray my predecessor" because I have no interest to be betrayed.

5. Godwin Obaseki knows the mission, vision, target, he knows were we are, because he had been part of the tradition.

6. Godwin Obaseki sits in the office of the economic team which he has built inside the heart of government house using the network of his friends without demanding a dime.

7. Obaseki is creative, he has worked for seven and half years for the Edo people using his brain quietly, not making noise. He I know my limit, Obaseki knows his limit.

8. He said that a man like Godwin Obaseki will not ask me to give him contracts, but he will promise me, saying comrade, you just do the thinking, we will create the means to actualize your thoughts.

9. He to Obaseki's credit today, check the Edo State book, we did not build new structures in government house with government money. Oshiomhole said that the economic teams office was built through Godwin's network and today, it remains a permanent assets of the Edo state government.

10. I don't see your opponent Ize-Iyamu being able to say that, he said I want to be calling that building Godwin Obaseki's building.

12. Oshiomhole said if you have to look at Godwin Obaseki and his credentials and look at Ize-Iyamu whose only work by his CV was a student and later rusticated for two years, he read law but he is not a barrister.