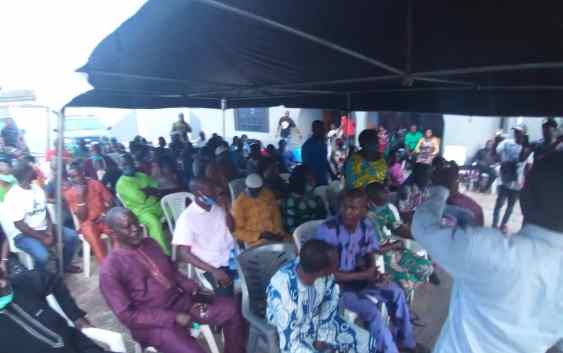 Ahead of tomorrow's primary election of the All Progressives Congress in Ondo state, Akure South is now in the lock-up for former Deputy Clerk of the National Assembly and leader of the presidential campaign, Chief Olayide Adelami, as the party's nominee.

The indications emerged after the former Secretary of State of Ondo, Honourable Ifedayo Abegunde, pledged his full support and delegates at 7 out of 11 in Akure, which he facilitated during the last Congress.

Most of the Delegates and local government executives and other statutory officers remained loyal to Abegund even after he parted with Akeredolu. Abegunde, while hosting Chief Adelami at his Alagbaka residence alongside the delegates, said that Adelami's choice was made after due consultation with his followers and political associates across the state.

The former House of Representatives, which had previously announced its support for Dr. Segun Abraham after resigning as SSG, said that Abraham's declaration was deeply regretted. Apart from sending all his delegates to Adelami, Abegunde also vowed to mobilize his supporters across the state to the highest bureaucrat of the former National Assembly.

Abena, as he is kindly called, added, "I will ensure that all my supporters and associates who are state delegates vote for you on Monday, as I believe you are the best choice for our dear state." Chief Adelami, while thanking the former SSG and its steadfast supporters for their support, vowed to run an open and transparent government that would serve the interests of every citizen.

Chief Adelami Spokesperson, Rahaman Yusuf, who confirmed the top-level meeting, said that Adelami has secured massive endorsements from party leaders and delegates across the state with a noisy campaign.

"Understanding the sobriety of the present times in the light of the COVID-19 pandemic, my main focus is on a purposeful and noiseless pre-primary campaign that has produced unprecedented results.

“We have received massive endorsement across the state right from Owo, the hometown of my principal and the willingness of some aspirants to work with us. "This is indeed the mandate of God that will be fully manifested on Monday".