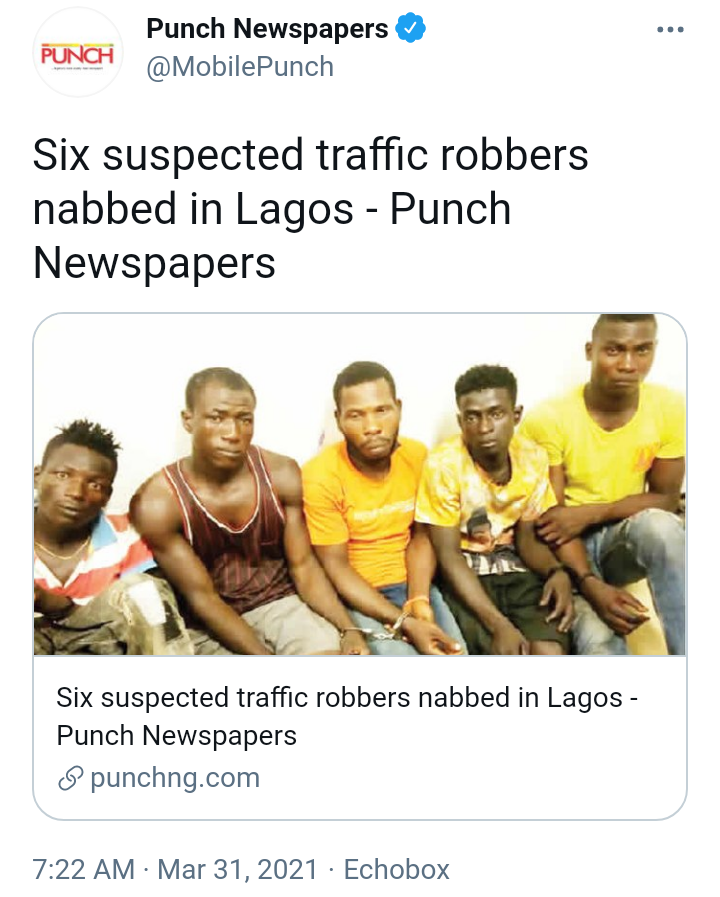 Six suspected traffic robbers have been arrested by men of the Rapid Response Squad of the Lagos State Police Command for allegedly dispossessing unsuspecting members of the public of their valuables around Iddo Bridge, Ijora Olopa, Ojota and Ketu areas of the state.

The state Police Public Relations Officer, Muyiwa Adejobi, in a statement on Tuesday, said the RRS Commander led the operation, adding that a toy gun was recovered from one of the suspects.

He said, “The operatives of the Rapid Response Squad of the Lagos State Police Command, on Tuesday, March 30, 2021, nabbed six notorious traffic robbery kingpins at different locations in Lagos State. 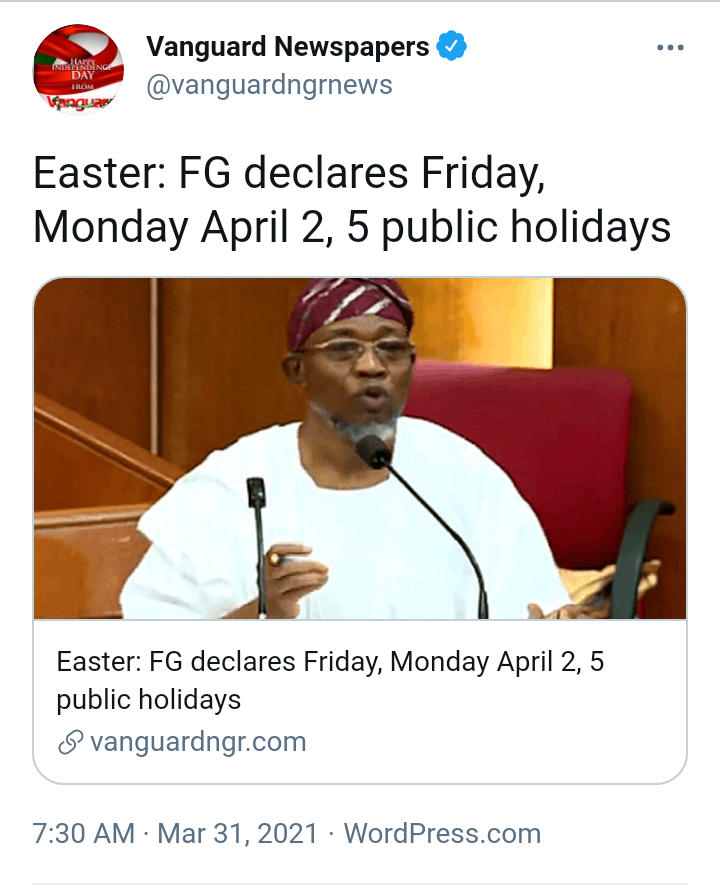 The Federal Government has declared Friday and Monday, April 2 and 5, 2021, respectively as public holidays to mark this year’s Easter Celebration.

The Director, Press and Public Relations in the Ministry of Interior, Mohammed Manga, disclosed this in a statement issued in Abuja yesterday.

According to him, the Minister of Interior, Ogbeni Rauf Aregbesola, who made the declaration on behalf of the Federal Government, urged Christians to emulate the attributes of forbearance, forgiveness, kindness, humility, love, peace and patience, which were demonstrated by Jesus Christ.

US Sends Strong Message To Nigerians 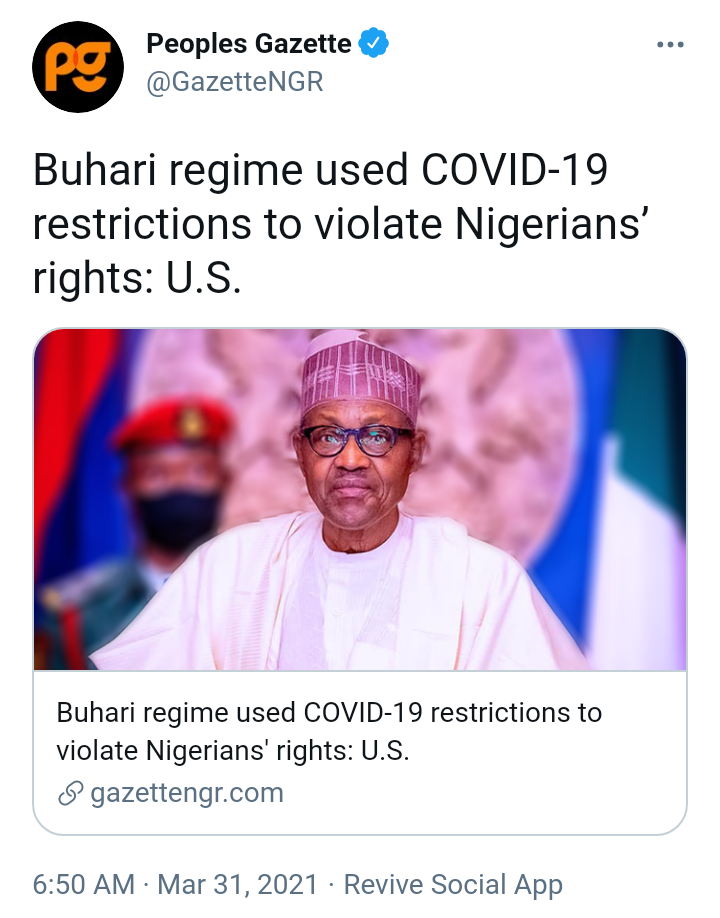 The United States government has slammed President Muhammadu Buhari’s regime for using the COVID-19 pandemic as a disguise to trample on its citizens’ rights, especially during the #EndSARS protests.

This was stated by the U.S. Secretary of State Anthony Blinken while announcing the 2020 Country Reports on Human Rights Practices on Tuesday.

Commenting on the 45th annual report of the U.S. Department of State, Mr Blinken noted that Nigerians and citizens of other countries defied the COVID-19 health risks, the threat of arrest, and other intimidation forms demand the respect of their fundamental human rights, regardless of the repercussions.

Buhari Will Govern From London - Presidency 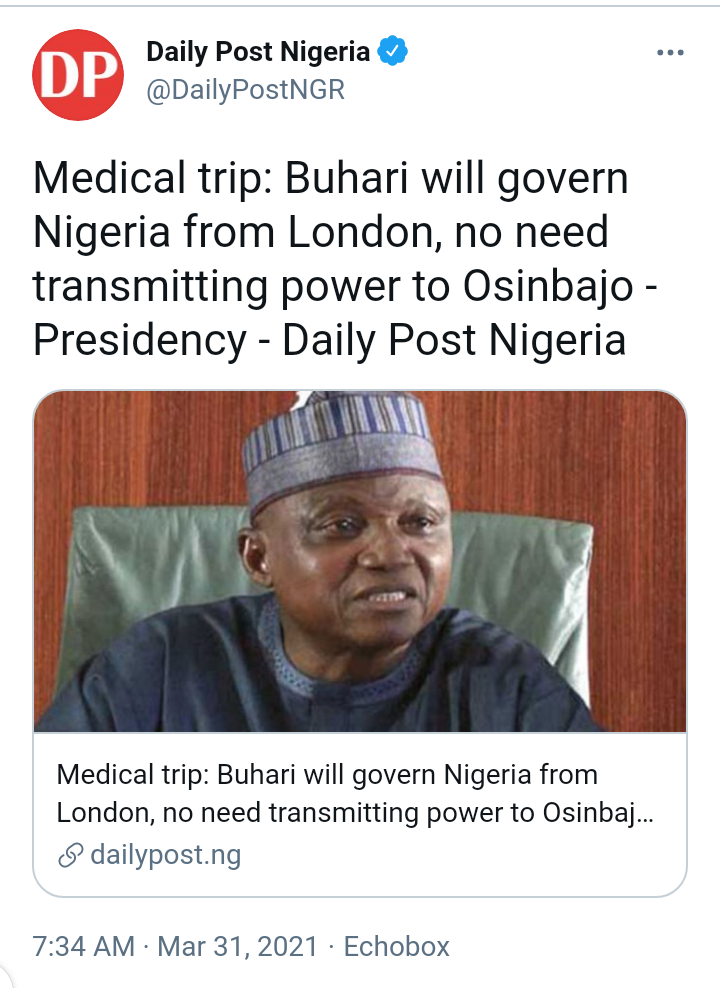 The Presidency has told Nigerians that President Muhammadu Buhari will govern the country from wherever he is, insisting that it unnecessary for him to transmit power to the Vice President, Professor Yemi Osinbajo

Buhari departed Nigeria for London, the United Kingdom on Tuesday for what the Presidency described as a routine medical checkup.

He will spend a minimum of two weeks in the United Kingdom and many Nigerians were concerned about him not transmitting power to Osinbajo. Do you think Buhari can govern Nigeria from London?

Eid-el-Fitr: Buhari, Aisha And Family Step Out Together First Time In Months