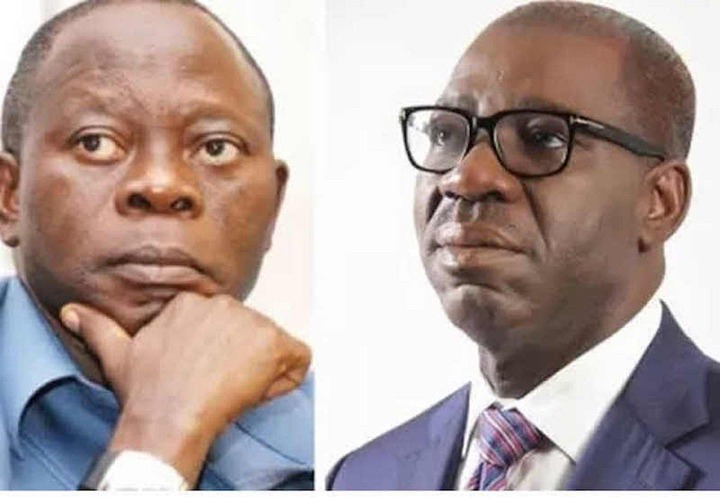 EDO State Governor, Mr. Godwin Obaseki at the end of the week kept up that he has no personal grudges against his predecessor and previous administrator of the All Progressives Congress (APC), Comrade Adams Oshiomhole, just dislike his style of governmental issues.

Obaseki unveiled this to writers in Auchi, Etsako-West Local Government Area of the state, at the centennial birthday Thanksygiving of Msgr. Thomas Oleghe and eighteenth Canonical Erection Anniversary of the Diocese of Auchi held at Immaculate Conception Cathedral in Auchi.

Obaseki, who traded welcome with an elbow-knock in consistence with COVID-19 preventive conventions, with his predecessor, said they are the two children of Edo with interest of the state on a basic level.

The governor said the Zonal Congress of the Peoples Democratic Party (PDP), which was planned to hold this Saturday, was delayed because of the local government elecion occurring in Delta State.

"The Zonal Congress, which was to hold today has been delayed to Tuesday and it's a typical everyday practice to fulfill the party's constitution; there is not all that much," he added.

On his part, Oshiomhole, who was a visitor at the occasion, hailed his replacement, Governor Obaseki, depicting him as 'his sibling and companion.'

Oshiomhole expressed: "When the governor talks, the matter ends. The governor realizes that retired people here probably won't have the option to do a lot, that is the reason he said all other things needed to finish the lodging of the Catholic School of Nursing and Midwifery in Uzairue, his administration will do."