A human rights lawyer Kabir Akingbolu has asked President Muhammadu Buhari to investigate and prosecute the Federation's Attorney General and Minister of Justice Abubakar Malami for corruption and abuse of office.

In a letter to the President, Akingbolu urged him to take the action if his government is serious about fighting corruption.

Malami in 2018, according to the lawyer, given the fact that numerous lawyers had worked and completed all modalities for recovering the Abacha loot from the United States, ensured the withdrawal of over $16 million via his cronies under the dubious idea of a 10 per cent commission.

Akingbolu said, "Everyone in Nigeria wept as much as the U.S. attorney who was acting for the money on behalf of Nigeria, on the ground the job was already completed and no lawyer needed to do anything to justify the commission again, but our A.G.F turned a deaf hearing and took the money away. 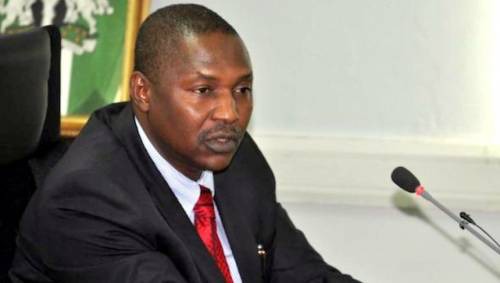 "Malami terminated a N25bn criminal case against Senator Danjuma Goje in 2019 without excuse. Malami removed criminal charges in June 2020 against killer soldiers who had been arrested along with Wadume, a notorious kidnapper and an armed robber.

"He also allegedly owns the listed properties: he owns a multi-million-naira sprawling Rayhaan Hotels situated opposite Aminu Kano Teaching Hospital, Zaria Street, Kano State, which is worth around 500 m away. Another property located at Ahmadu Bello Way, Nasarawa GRA, Kano, worth about N600m. A newly built school located at Phase 1 Birni Kebbi at the back of Nitel at Gesse, worth about N700m.

Viii. Come on. A multimillion-naira property designed by Mr Malami for his son located in Birni Kabbi's Gesse Phase II worth over N400m.

"Continuous act of giving the Federal Government reckless advice to disobey court orders, which necessitated the irregular detention of Omoyele Sowore, El-Zakzaky, Sambo Dasuki and a host of others, after competent courts ordered their release, which actions he unfortunately vigorously defended before the Senate when he went to his second named minister screening.

"A mansion known as the Azbir Arena, built by Mr Malami for his second son, Azbir is situated 200 meters from the mansion of Malami brother. Azbir Arena is a N3bn entertainment center with a large plaza and a play area for children and a hotel all combined in one huge property. Malami used the Federal Ministry of Justice official letter head to invite guests to his son's wedding as if it were a state-sponsored event. At his wedding party reception, he helped his son deface the naira to shame the country, and this act is contrary to section 21(1) and (3) of the 2007 Central Bank Act, which provides: A person who has tempered with a wedding.Coins or notes issued by the Bank shall be liable for an offense and shall be liable on conviction to imprisonment for a period not less than six months or to a fine not less than N50,000 or both.

'For the avoidance of doubt, spraying, dancing or matching on the naira or any note issued by the bank on social occasions or otherwise, the assault and defacing of the Naira or any note shall be punishable in compliance with subsection ( 1) of this section. At the wedding of his friend, he permitted COVID-19 protocol and regulations to be violated as if he were above the law

Thereby endangering the lives of Nigerians. Please note that a minister recently lost his position in Ghana because he breached protocols with Covid19.

The lawyer also said he may file a mandamus to force the Inspector-General of Police, Mohammed Adamu, to fulfill his constitutional duties if the government fails to prosecute the AGF.

"So, if this government wants to keep mum by treating Mr Malami with kid's gloves or a holy cow, the government will forget its anti-corruption song of war and avoid deceiving Nigerians and the nation.

On behalf of the Nigerians, I hereby unequivocally request that Your Excellency suspend Mr Malami with immediate effect and order his investigation, either by a special panel or by the police.

"Nonetheless, if the government fails to do so within 14 days, I would not hesitate to forward a petition to various relevant international agencies and other civil society organisations that this government is only paying lip service to the fight against corruption in Nigeria. I have copied that letter for their attention to the Inspector-General of Police and the Presidential Advisory Committee on Corruption.

"If, however, you fail, neglect or refuse to satisfy this subtle demand, then I shall have no choice to file for it

Mandamus to compel the Inspector-General of Police to carry out its statutory tasks of investigating these corrupt practices and all of these may embarrass the government, not only in Nigeria but globally.