By Doctorwendy2 (self meida writer) | 1 months 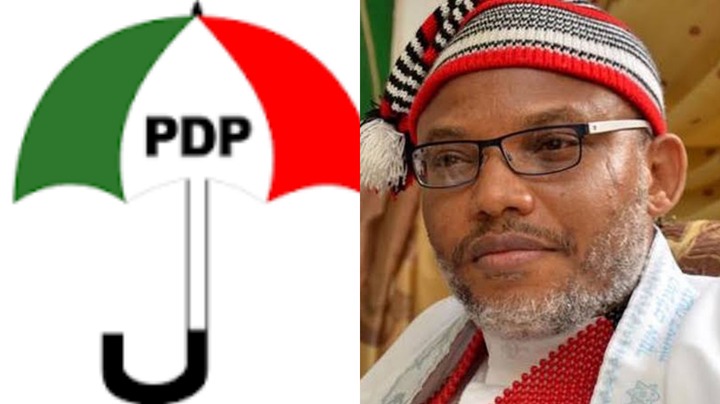 1.) "I Render An Apology To Nnamdi Kanu And Ugwanyi" - Chinedu. 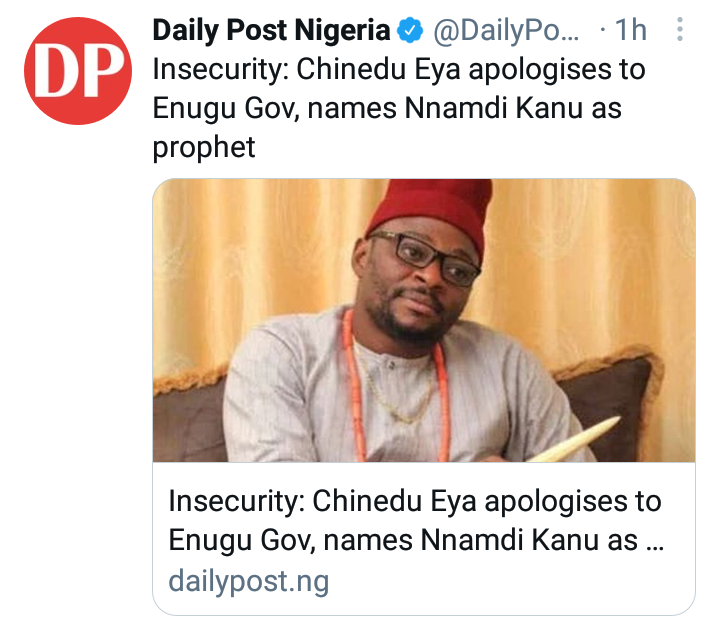 ﻿A former senatorial aspirant in Enugu State, Chief Chinedu Eya, has apologized to the state governor, Ifeanyi Ugwanyi and the leader of the Indigenous People of Biafra, Mazi Nnamdi Kanu over his criticism.

Recall that Eya had been a major critic of Nnamdi Kanu for revolting against the President Muhammadu Buhari’s government.

Eya, who is a chieftain of the Peoples Democratic Party (PDP), in his 40th birthday message made available to DAILY POST, said it was never expected that Nigeria’s insecurity would reach a situation that would project Nnamdi Kanu as a prophet.

He stated that the IPOB leader foresaw the current security situation long ago.

According to him, his relationship with Governor Ugwanyi and Kanu was not as it ought to be due to his wrong view of the situation, hence, the appeal for forgiveness. 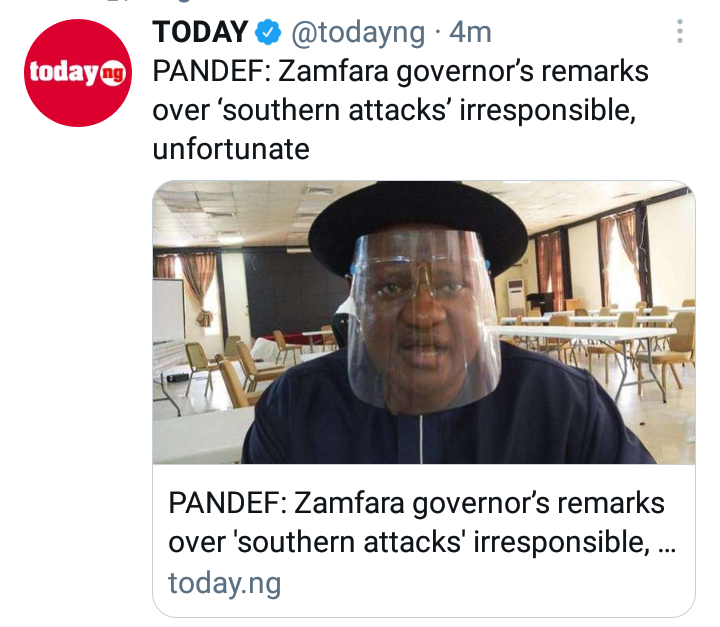 The Pan Niger Delta Forum has said a recent comment by the Governor of Zamfara State, Bello Matawalle, that Southerners should stop attacking Northerners in their area else the North would retaliate was irresponsible and unfortunate.

Recall that the Northern Elders Forum had made similar comments alleging attacks of Northerners in the Southern part of the country and threatened to do the same if such alleged attacks continue.

But PANDEF in a statement by its National Publicity Secretary, Ken Robinson, said while it ignored the warnings of the NEF because the nation was now used to their ‘unguarded utterances’, a similar comment now from Governor Matawalle was preposterous.

The PANDEF spokesman said the country was on the edge of a cliff, pointing out that such comments were not expected of anyone, much less a leader like Matawalle.

In a separate development, PANDEF said restructuring was now not only a vital necessity but has expedient for the survival of Nigeria as a united entity

PANDEF said it welcomes, but with caution, the declaration of support for restructuring by some northern groups, including the Arewa Consultative Forum and Northern Elders Forum.

Robinson also in a statement said, “However, against the background of inconsistencies and contradictions, we would rather take their declaration with a pinch of salt. For instance, how can they declare support for restructuring and then say they do not support power rotation? That is most illogical and creates room for doubt. 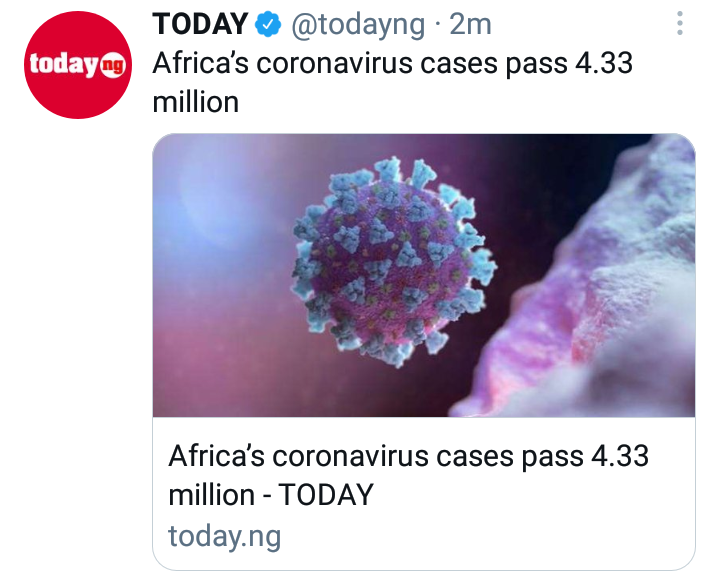 The number of confirmed Coronavirus (COVID-19) cases in Africa has reached 4,330,666 as of Saturday, the Africa Centers for Disease Control and Prevention (Africa CDC) said.

The Africa CDC, the specialised healthcare agency of the African Union (AU), said the death toll from the pandemic stood at 115,191 while 3,888,495 patients across the continent have recovered from the disease.

South Africa, Morocco, Tunisia, Ethiopia, and Egypt are among the African countries with the most cases in the continent, according to the Africa CDC. 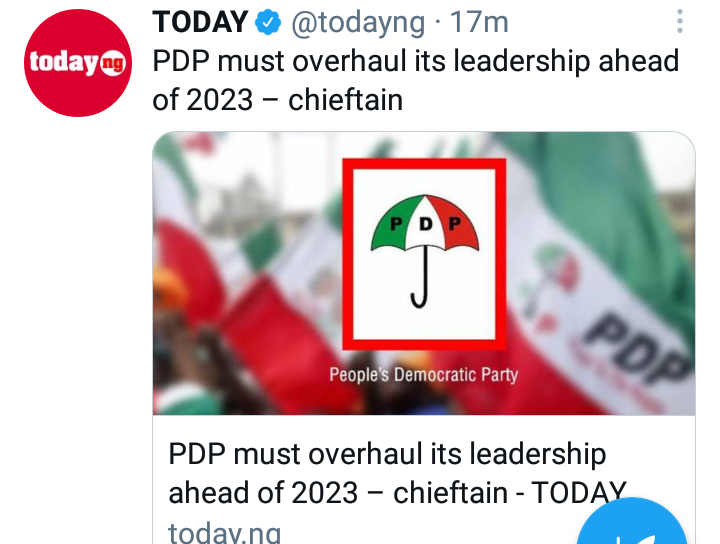 Prince Afegbua said this, yesterday, during an interview with newsmen in Abuja.

A couple of House of Representatives members have also defected to the ruling APC that has crippled the economy of the nation, rendering the populace helpless in the face of joblessness and unemployment.

According to him, the PDP leadership and exco members are too overfed with potbellies everywhere and are unable to constructively engage. 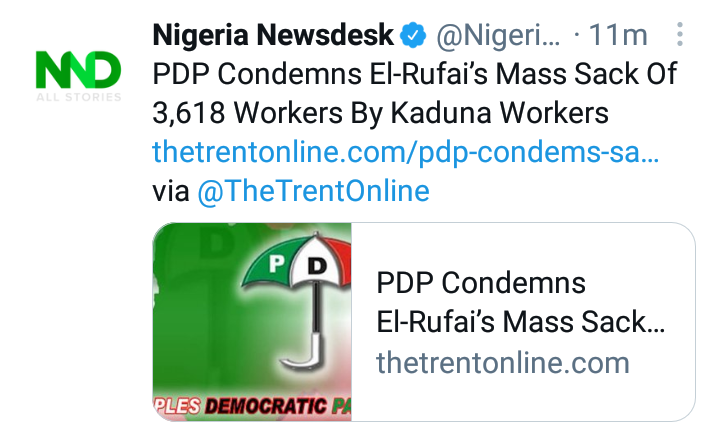 The Kaduna State Chapter of the Peoples Democratic Party, PDP, on Saturday, April 10, 2021, said it vehemently condemned the illegal mass sack/retirement of the 2,118 Local Government staff and over 1,600 Primary Health Centres, by governor Nasir El-Rufai, the Governor of Kaduna State.

This was contained in a statement issued on Saturday by Abraham Alberah Catoh, State Publicity Secretary of the party

He said, that the action by the governor is outrightly unlawful, callous and smacks of the insensitivity of the APC government to the plight of the good people of the state.

The Decisions of this nature by the administration since assumption of office has been responsible for the heightened insecurity and poverty which has become so pervasive in the State, to the extent that the slogan centre of Learning which Kaduna State is known for is now referred to as the Kidnapping hub of the Nation.

This, and several other actions of the governor leaves all and sundry, without any iota of doubt, that indeed the Elrufai/APC led government, just as it is at the Federal level, lacks human face and is a conglomeration of family and friends that lacks empathy and compassion in governance.

What are your thoughts on these headline news? Kindly leave your comments and share.

What’s behind the violence in Israel and Gaza?