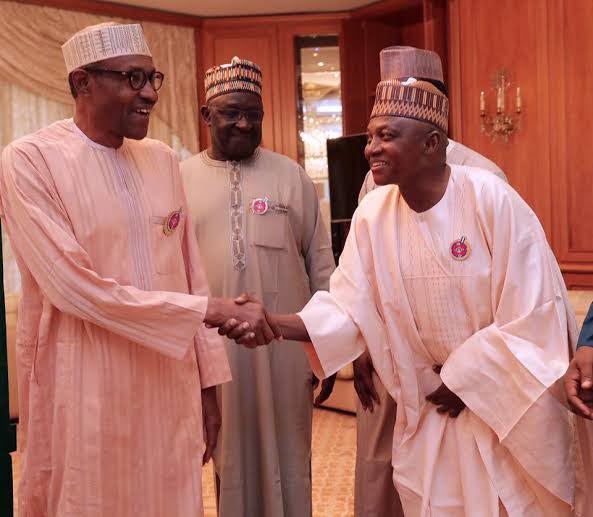 Recently, The Corruption Perception Index (CPI) 2020 report published by Transparency International reveals that Nigeria scored 25 out of 100 points thereby standing on the 149th position out of the 180 countries surveyed.

This current ranking, indicates that Nigeria is now the second most corrupt country in West Africa while Guinea-Bissau top the position.

This Nigeria indexing by the TransparencyInternational was faulted by Garba Shehu, The Spokeperson for President Mohammadu Buhari as he charges the organization to provide indices and statistics used to justify the baseless rating on Nigeria to be on the second position.

In his series of Twitter post, the President Spokeperson list some of the achievements of Mohammadu Buhari Administration in reducing the rate of corrupt practices in Nigeria as he claims the Adminstration deserves some credits as against what the Transparency International painted the country to be. 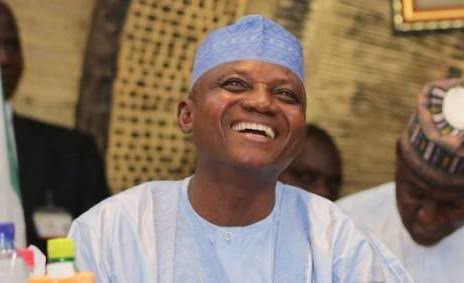 He said "We have repeatedly challenged TI to provide indices and statistics of its own to justify its sensational and baseless rating on Nigeria and the fight against corruption. We expect them to come clean and desist from further rehashing of old tales.

We are also not unaware of the characters behind the TI in Nigeria whose opposition to the Buhari administration is not hidden.

The Buhari administration deserves credit for diminishing corruption in the public service and will continue to vigorously support prevention, enforcement, public education and enlightenment activities of anti-corruption agencies.

A Naira denominated review that excludes recoveries in Dollars, Pounds, Euro shows that a sum of N1.2tn was recovered by EFCC between 2009 — 2019. N939bn of that total was recovered between 2015 – 2019 with less than N300bn recovered in the first six years.

Additionally, preventative instruments deployed by this administration such as Treasury Single Account (TSA), Integrated Personnel and Payroll Information System (IPPIS) coverage expansion and the removal of 54,000 ghost workers from federal civil service, saving us N200bn annually serve as evidence that perception is not reality.

Reality is based on verifiable facts and data. And any evidence-based analysis would prove that whether it is by prevention or punitive measures in recoveries and prosecution, this administration would be rising fast up these rankings rather than standing still.

This post by Shehu Sani has gotten many Nigeria talking about his stand on the TI ranking. See some comment below

My only issue is this, if so much money recovery were made and are still being made, why then do we still borrow money? What have the money been used for? Why is our health and education sector still a massive mess? Etc 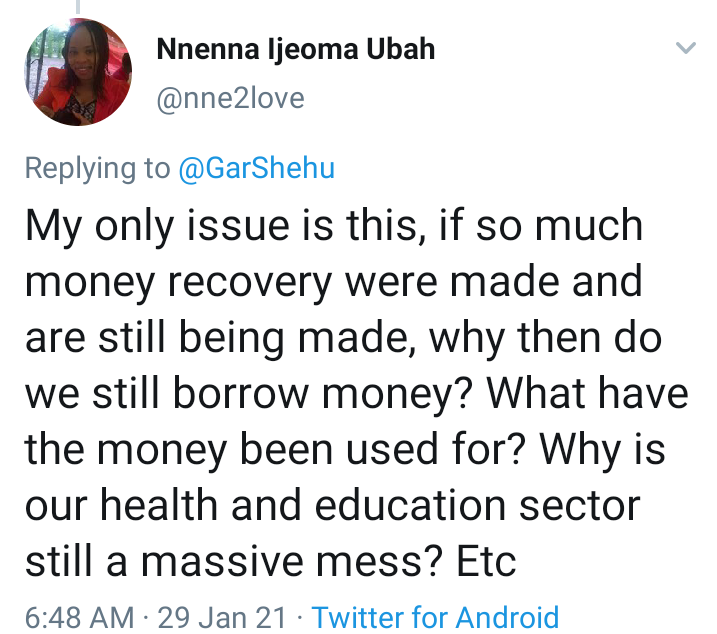 Let's assume their report about corruption at he ports were true. What exactly have you done to rid the ports of corruption? Have you ever heard about the need to eliminate human bottlenecks from corrupt govt institutions? 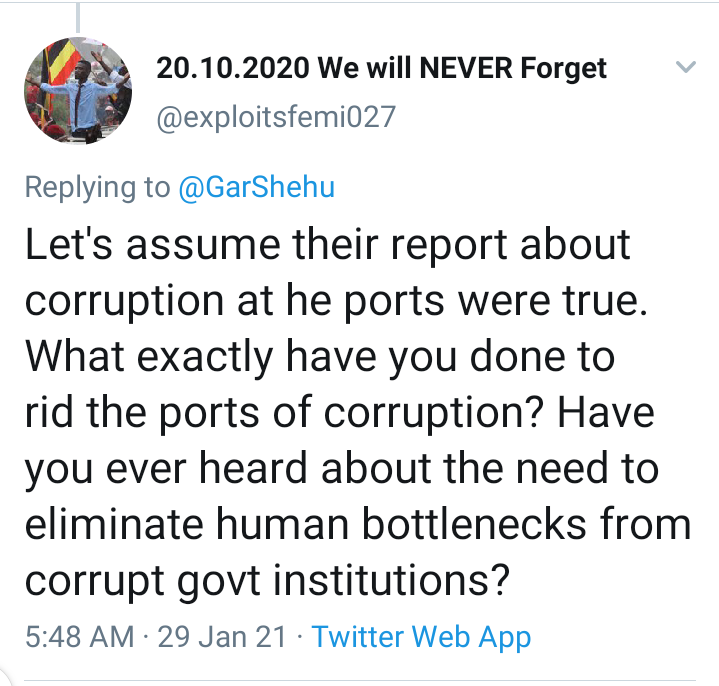 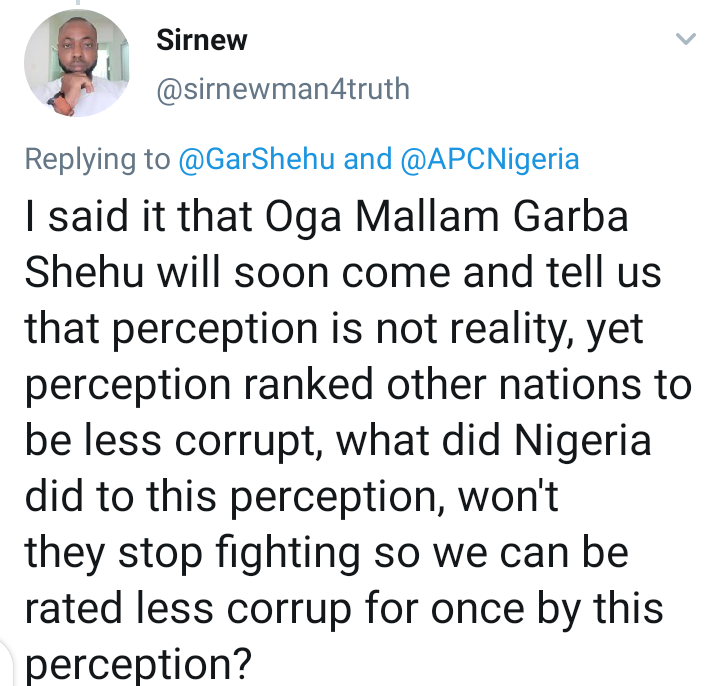 Pls all the money that was recovered by this administration, what was it use for? Where are this money? 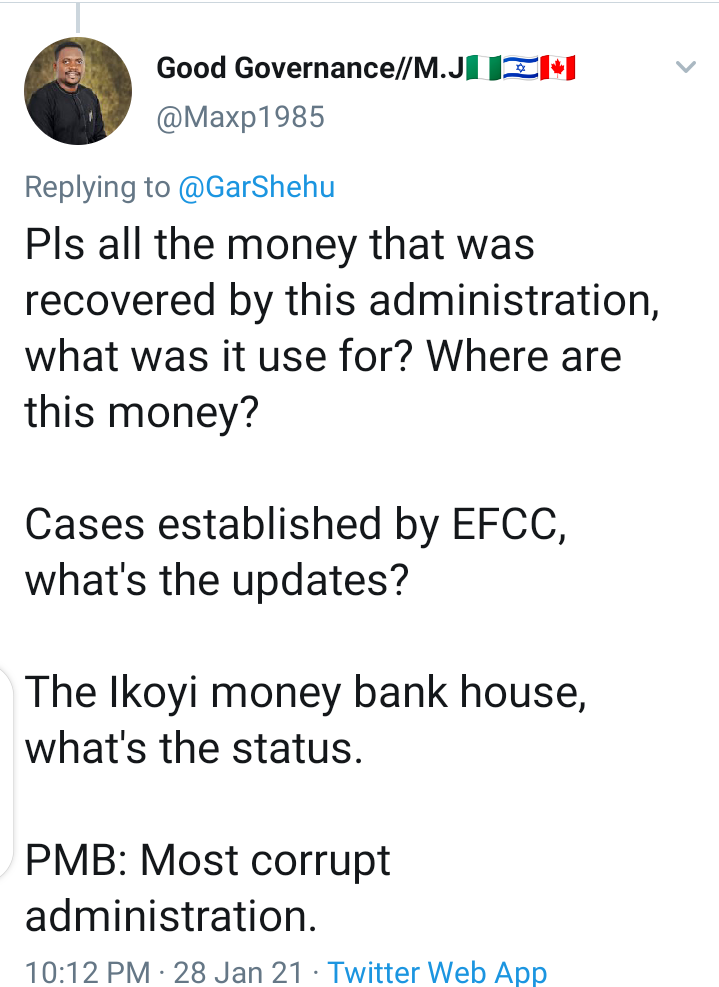 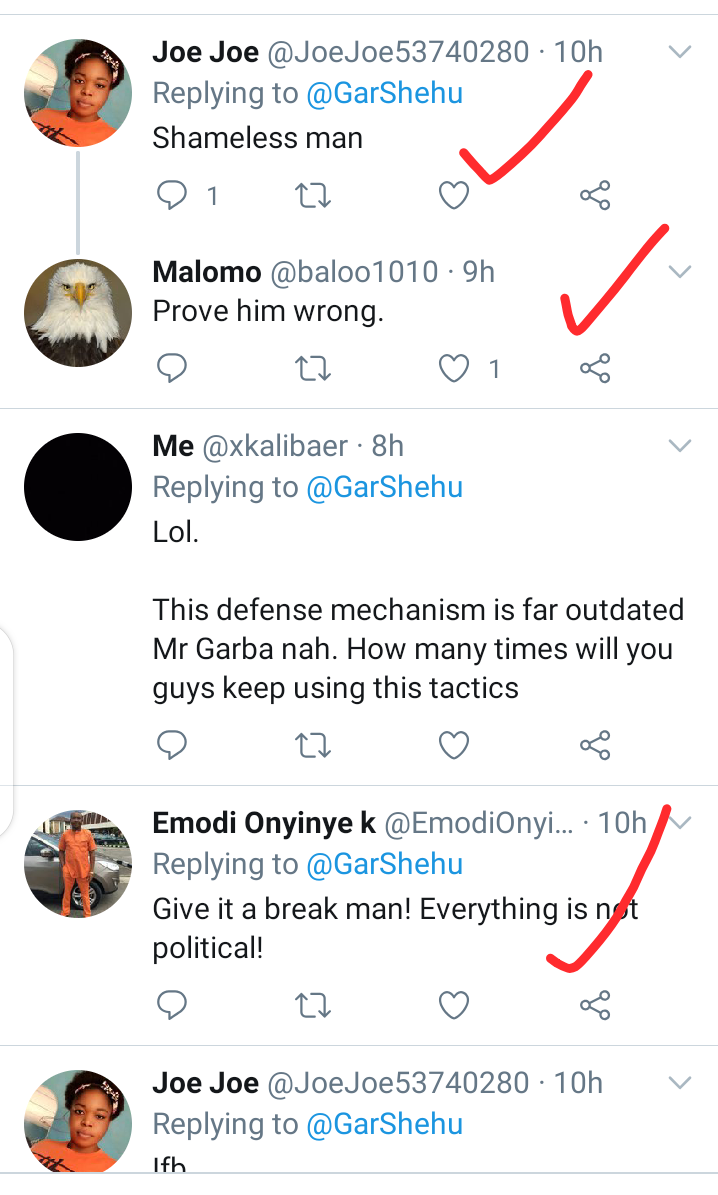 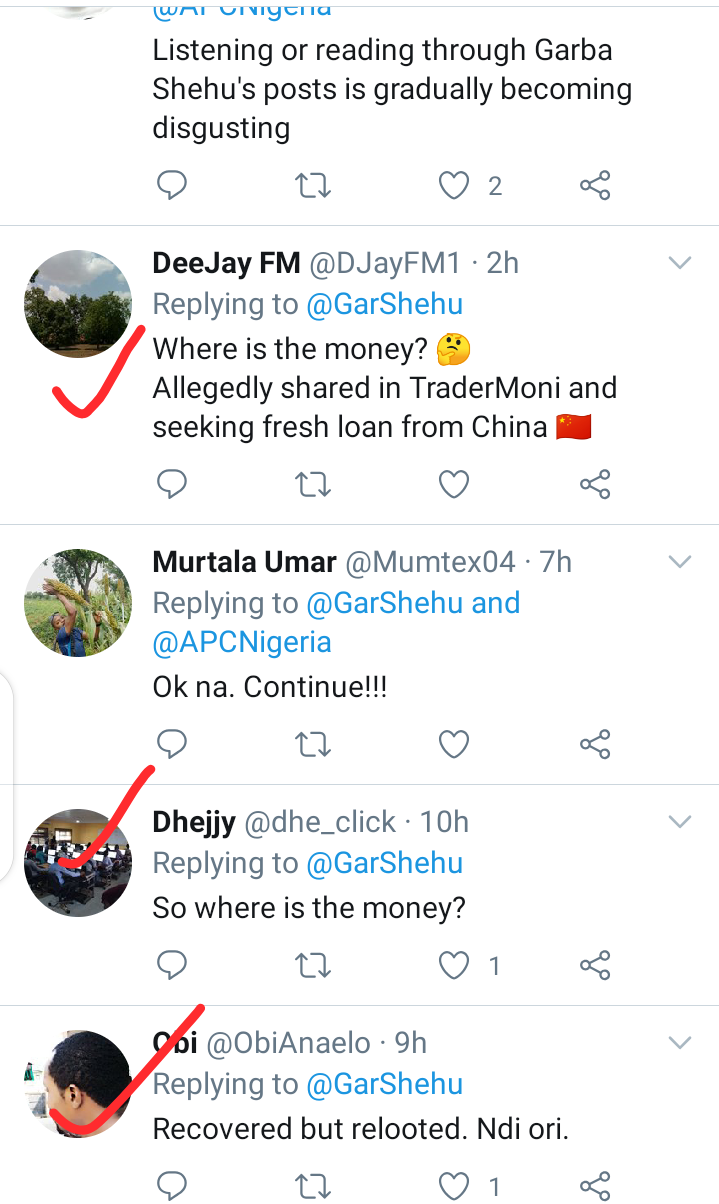 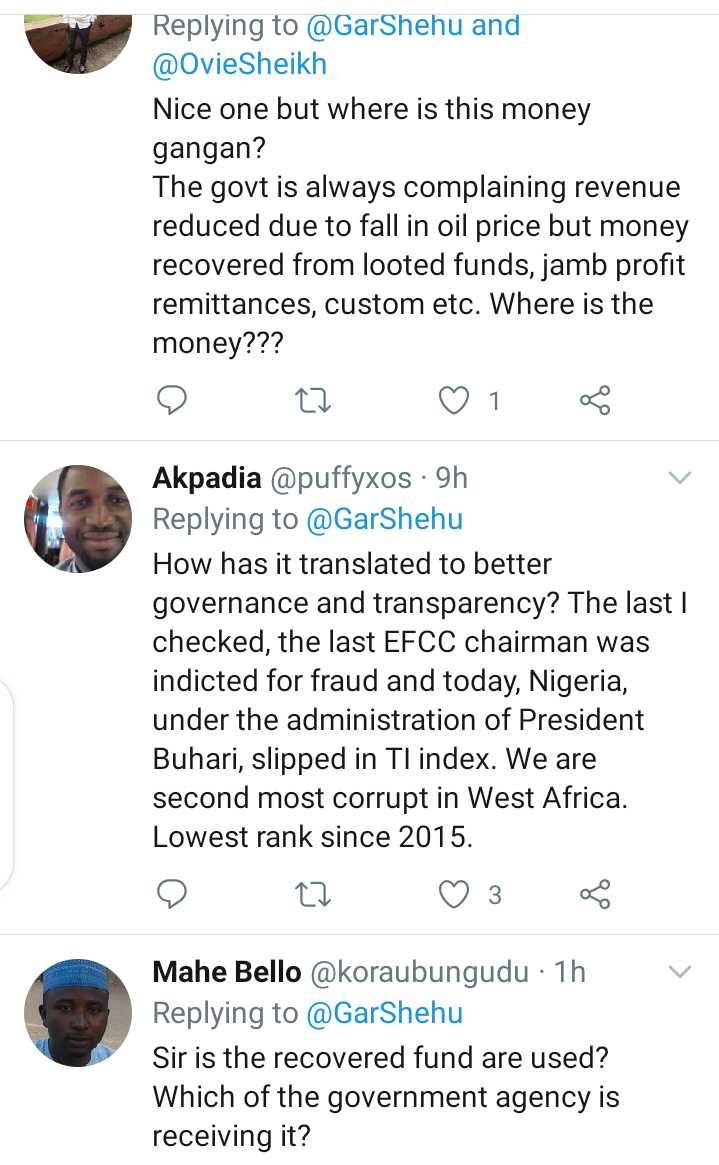 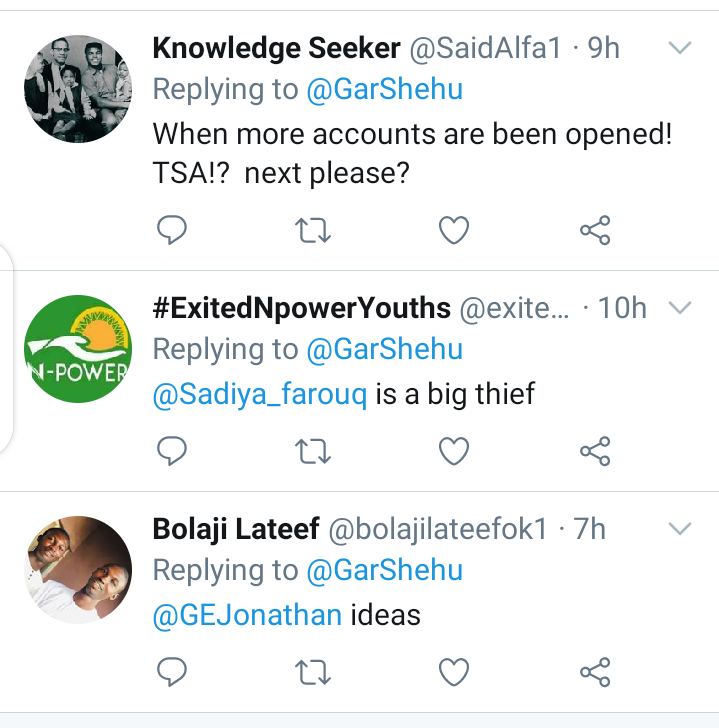 What is your take on the rating of Nigeria by the Transparency Interested? Do you think Shehu Sani is right about his analysis?.